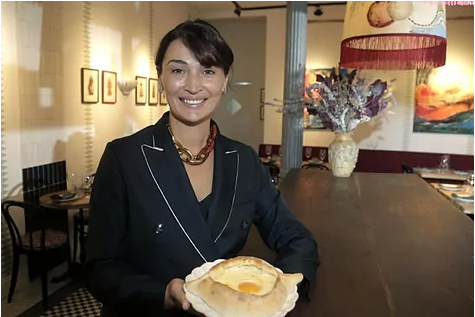 Every time Nino Kiltava held a dinner at her home in the capital, the guests left surprised and delighted with the menus that this Georgian prepared for them. " She always made dishes from my country," she says proudly. The surprise effect was guaranteed because no one had tried - or probably heard of - khachapuri and khinkali, two of the best-known dishes of this Caucasian republic located on the Black Sea coast, on the border between Eastern Europe and Western Asia.

"In Spain very little is known about Georgia (capital Tbilisi, to locate us) and I think we have many things in common: we like to go out, we are family members, we value time with friends a lot...". From so much good criticism that he received, he launched himself to investigate the market and saw that there was a gap to set up something. "There were no restaurants of this cuisine. I had no idea of ​​setting up a business, but I started looking at places without further ado," he tells half in Spanish, half in English. What he had left over was desire. " I have always been very cooky ".

For a few weeks, he has been combining his work at the Georgian Embassy, ​​where he is in charge of promoting the culture of his country, with Nunuka, a charming bistro located in Chueca that pays tribute to his mother and, above all, to his paternal grandmother. "That's what we called my grandmother at home." She spent a lot of quality time with her as a child. "She was an amazing hostess. We never knew how many people were coming over for dinner but she always had everything planned."

And it was with her that he learned to cook and appreciate homemade food made with care. Now he prepares those recipes in his new 'home' on Libertad Street. " I want people to feel comfortable here as soon as they walk through the door, that there is always a welcoming atmosphere", he explains by the window of the premises. "My grandmother passed away when she was 14 years old but I still have her very present."

He left Georgia in 2003 and has since lived in Germany - the last eight years in Berlin - Italy, Austria and Switzerland. "My husband is a military attache at the embassy, ​​which is why we have traveled so much in this time." She speaks English, Russian, German, "a little Italian" and Spanish. "I would like to improve my level," she says with conviction.

Nunuka's letter, however, has wanted it to be in Georgian. "I know that they are difficult words to pronounce and to learn, but it seemed to me a way to maintain the essence". The room and kitchen team is made up of compatriots; in front of the kitchen is David Narimanashvili.

At the table, much to discover. The undisputed star dish, khachapuri, is presented as a freshly baked flatbread stuffed with cheese and egg yolk. It is mixed and caught by hand. It is overshadowed in the category of 'hits' by the khinkali, a dough filled with minced meat and broth, which they recommend taking by hand -and carefully so that the sauce does not drip on your clothes.