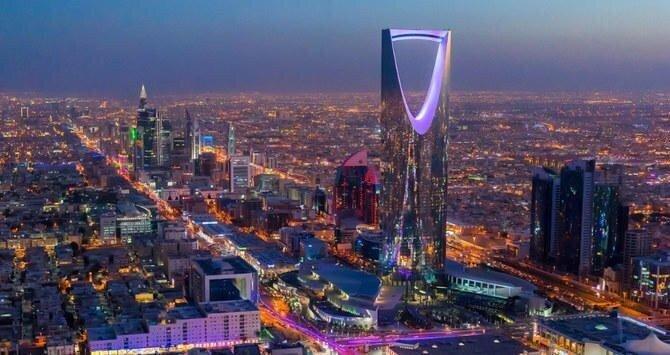 Back
Saudi Arabia’s economy will rebound from the coronavirus pandemic this year driven by strong growth from non-oil sectors as investment from the Kingdom’s sovereign wealth fund helps support a shift away from crude exports, the International Monetary Fund said.
Saudi real GDP will grow 2.4 percent in 2021 following a 4.1 percent contraction last year, as the non-oil economy expands 4.3 percent, the IMF said in a statement following its latest Article IV consultation with the largest Arab economy. Real GDP growth will accelerate to 4.8 percent in 2022, while non-oil growth slows to 3.6 percent, it said.
Real oil GDP is expected to shrink by 0.4 percent this year as production is assumed to stay in line with an agreement between the Organization of the Petroleum Exporting Countries (OPEC), Russia and allies, known as OPEC+.
“The report confirms KSA Government’s success in achieving tangible good results during the world’s most difficult year, due to COVID-19 impact, oil price volatility, sharp economic fluctuations, falling global demand, slowing growth,” Saudi Finance Minister Mohammed Al-Jadaan wrote on Twitter.
Saudi Arabia, the world’s biggest crude exporter, was hit by the double blow of last year’s historic oil price crash and the COVID-19 pandemic’s impact, though the economy showed signs of improvement from late in the year.
While VAT was hiked to 15 percent from 5 percent in July 2020 in an attempt to plug a shortfall in the budget, the fiscal deficit widened to 11.3 percent of GDP from 4.5 percent in 2019, sending debt to GDP up to 32.5 percent of GDP from 22.8 percent.

However, the budget gap is expected to narrow to 3.5 percent of GDP this year and just 1.9 percent in 2022, helping total debt fall to 30.4 percent of GDP by the end of next year.
Investment by the kingdom’s sovereign wealth fund, the Public Investment Fund, is expected to offset government fiscal consolidation’s drag on growth, the IMF said. PIF’s investments are a central part of the country’s economic development program Vision 2030, which aims to wean the economy off oil.
Recent announcements by PIF-backed companies include $16 billion of new projects in 2021 by ACWA Power and a goal of increasing assets to about SR4 trillion ($1 trillion) by the end of 2025, up from SR1.6 trillion today. The government should monitor the impact of its ambitious investment program and assess the risks of crowding out private investment, the IMF said.
“Strong reform momentum is continuing,” the IMF said in the report. “The rapid increase in labor market participation of Saudi females and reforms to the Kafala sponsorship system for expatriate workers are very important to boost growth, productivity, and household incomes.”
“Further, the program to codify legal practices, the PPP/asset sales program, the deepening of the domestic capital markets, reforms for e-government and to harness the potential of digitalization, and the support to SMEs and entrepreneurs are all important to support a more diversified and inclusive recovery,” the multilateral lender said.
The IMF’s directors also commended the announcement of the Saudi Climate Strategy and the commitment to reducing greenhouse gas emissions.

“We don’t only expect an economic recovery, but also an improvement in the budget,” Mazen AlSudairi, head of research at Al Rajhi Capital, said in a telephone interview.
“We expect the budget deficit to go down to SR62 billion on Brent price of $65 per barrel.”
Brent crude started the year at about $52 a barrel and was trading close to $75 a barrel on July 9.
IMF oil GDP Saudi Arabia OPEC+