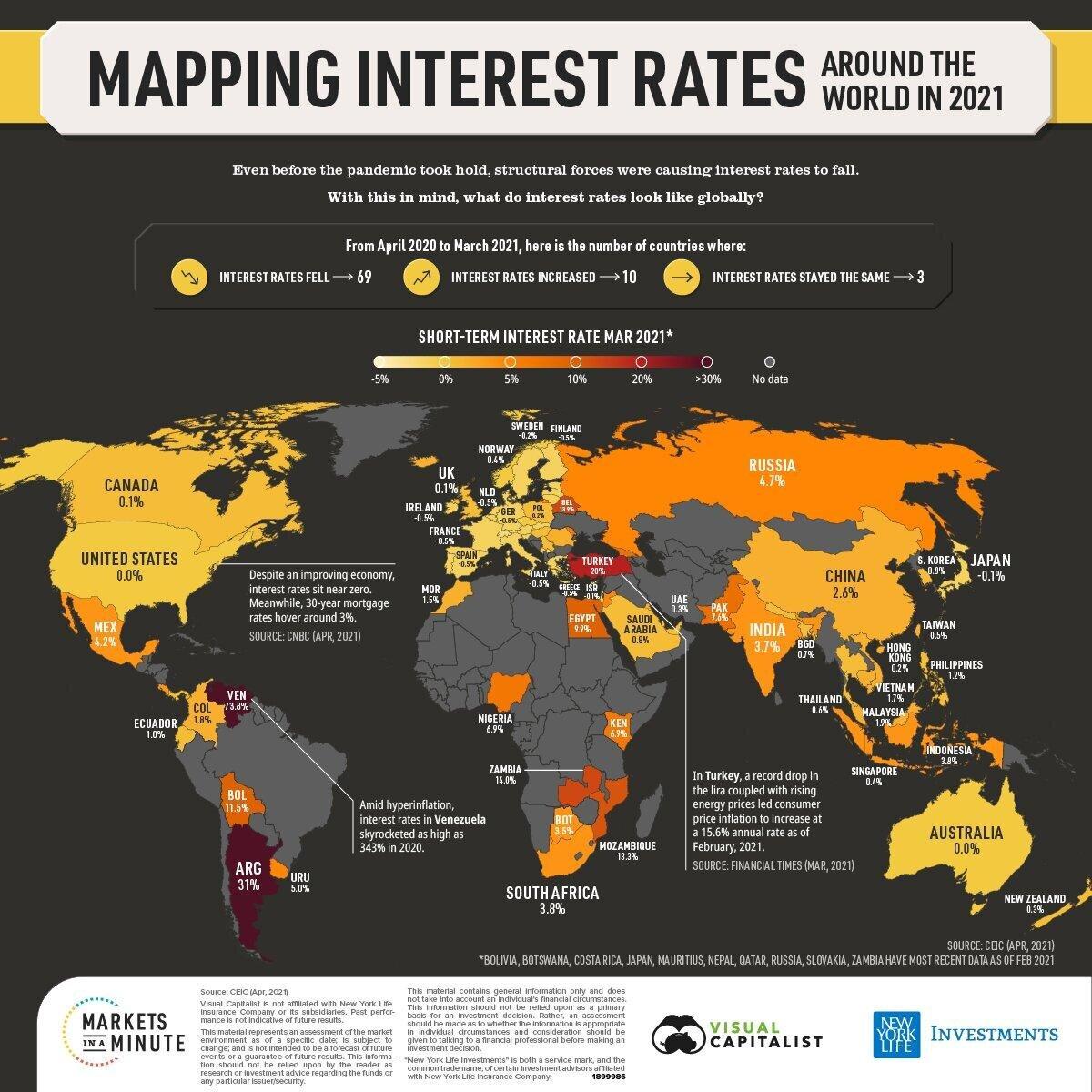 Back
Going as far back as the 14th century, pandemics have been found to have a negative effect on interest rates.

History shows that this effect is even greater than that of financial crises.
Across a study of 19 pandemics since the mid-1300s, real interest rates fell an average of 1.5 percentage points lower in the following two decades than they would have otherwise. And yet, even before COVID-19, structural forces, such as rising debt, were causing interest rates to fall.
The above Markets in a Minute chart from New York Life Investments shows interest rates by country in 2021.
Broadly speaking, the majority of countries’ short-term interest rates have declined since COVID-19 began. Using data from CEIC as of April 2021, short-term interest rates are measured by three-month money market rates where available.
Interest rate change Apr 2020 – Mar 2021
Across nearly every continent, interest rates have decreased as central banks enacted measures to combat the economic fallout of COVID-19.
In the U.S., interest rates fell to record lows, dropping by 0.1 percentage points between April 2020 and March 2021. As vaccine rollouts accelerated in 2021, real GDP grew by an annual rate of 6.4% in the first quarter.
Unemployment slightly improved to 6.1%, but still remains well above pre-pandemic levels of 3.5%.
Given these variables, the question of whether interest rates will rise is an open one.
Like the U.S., interest rates in the European Union declined, although at a greater rate—from -0.3% to -0.5%. To help improve economic conditions, the European Central Bank promises to purchase $2.2 trillion in government bonds until March 2022.

Together, the euro area, the U.S., Japan, and Britain have produced at least $3.8 trillion in the new money supply since early 2020.
As money creation and low-interest rates have become increasingly common phenomena, the focus has shifted to inflation.
With interest rates reaching 343% in 2020, Venezuela has been a poster child for hyperinflationary forces.
Energy shortages only compounded the effect which was well underway before the pandemic. Between April 2020 and March 2021, interest rates jumped over 50 percentage points.
In addition, Turkey and Brazil raised interest rates in March 2021 to dampen inflation. Interest rates in Turkey have increased 11.6 percentage points over the time frame, one of the highest absolute changes globally.
In 2020, the lira faced historic declines, causing the price of imports to climb significantly.
On the other hand, Bangladesh has seen its interest rates decline 6.4 percentage points, the steepest drop across the dataset. To help offset the effects of COVID-19, the Bangladesh Bank lowered interest rates from 7.1% to 0.7%.
With rates falling 3.2 percentage points, Nigeria has also seen one of the greatest interest rate drops. In March, Fitch Ratings gave the country a B rating with a stable outlook, supported by its low government debt-to-GDP ratio and large economy.
Research has found that countries with better credit ratings and transparent fiscal infrastructure had the greater ability for central banks to lower interest rates in response to the crisis.
Policy rate changes, a key central bank maneuver, have been an important tool in response to COVID-19.
As economic activity in some countries picks up, interest rates could rise. However, progress in vaccination distribution remains uncertain, especially in emerging markets.
In tandem with this, global central banks are applying unproven monetary policy frameworks, including money creation and large-scale bond purchases.
While studies show that interest rates have been falling over the past several centuries, the confluence of these factors will be revealed in the years that follow.
interest rate pandemic interest rates 2021 financial crisis