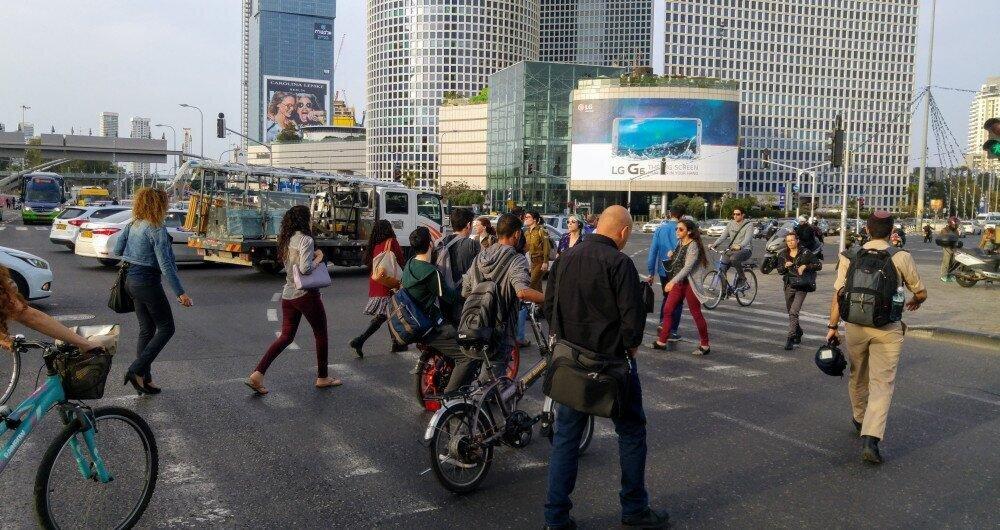 Israel's Ministry of Transport has prepared an ambitious plan in recent months to promote targets of more widespread use of sustainable transport (walking, cycling and scooters, and public transport) in the country's cities. The plan seeks to persuade Israelis to do much more walking, bicycle riding and using buses and trains when traveling, instead of driving their cars and jamming up the roads. This is one of the key issues promoted by the EU and the plan is similar to those in many cities in developed countries aimed at curbing the use of cars.

For example, Copenhagen set a target of 75% use of sustainable transport by 2025, and Madrid has a similar target. London and San Francisco have longer term slightly higher targets of 80% (the UK capital by 2041 and San Francisco by 2050). Malmo in Sweden has set a target of 70% sustainable traffic by 2030 and New York City has been working for more than a decade to reduce car lanes and turn them into public transport and bike lanes, with wider sidewalks along all major thoroughfares, Globes reports.

In contrast, in Israel, a much more modest bus travel target was set in 2012 - 40% of motorized travel in metropolitan areas. In 2019, a target of 10% of all traffic in cities on bicycles was set. At the same time transport infrastructure development in Israel in recent decades has been biased in favor of car use, while development of public transport initiatives and bicycle paths has been treading water.

Researchers Dr. Nir Sharav, Markus Sainok, Yuval Shaftan and Gali Freund wrote, "The development of land use in the country has expanded the suburbs in a way that has further increased dependence on the private car, thus deepening the problems of transport accessibility. In a country like Israel where 91% of the population lives in urban localities, sustainable traffic is the best and fastest way to promote the quality of life in the city."

The researchers mapped 136 localities in Israel with 10,000 residents and more, and added in the model that made up the Central Bureau of Statistics travel survey from 2017 (the latest survey published on the subject) with various characteristics such as population size, metropolitan location, sector, density, socioeconomic index and peripheral geographical index. The share for sustainable traffic under the model would be 55% -75%, with cycling being influenced by the urban topography and the availability of cycling infrastructure.

In Tel Aviv, more than half of the trips in the city are made by car - and the goals of the program reduce this rate to a quarter. The plan in Jerusalem sets a similar goal, and its mobility will be based mainly on travel by public transport and walking. And in Haifa, almost two-thirds of trips are made by car - and this will be reduced to a quarter. Most of the traffic in the city will be undertaken on public transport, and the plan sets relatively modest walking and riding targets, partly due to its hilly topography. In Beersheva - the cut in car use will be from 65% to 30%, more than in the center of the other metropolitan areas.

In Nazareth, 72% of car use will be cut according to the plan to 30% and the share of public transport use will climb from 3% to 38%. On the other hand, the situation in Bnei Brak is expected to remain almost unchanged due to the high walking data in the city today.

Israeli targets may be approaching those of Europe, but the reality on the ground is different. While in Tel Aviv, more than 50% of trips are made by car, the numbers in Europe are significantly lower: Berlin - 31%; Barcelona - 25%; Singapore - 33%; and Vienna - 27%.

Researchers in Israel have found that the locality's socioeconomic ranking has a significant effect on the mobility patterns in it. 49% of trips in low-rated localities were on foot, compared with 15% in high-rated ones, with the use of a car providing the opposite mirror image - 45% and 81%, respectively.

Achieving these targets could be patchy at best. Tel Aviv is striving to achieve these targets and its light railway system will soon begin operating. Jerusalem has had a light railway system for a decade and more lines are being built together with flyovers and underpasses. But other projects are being delayed. Ra'anana is refusing to build bus lanes and opposition to the Metro is mounting in the Sharon region. If the planned Greater Tel Aviv Metropolitan region congestion charge is introduced as planned in 2024, that would be a major step forward in achieving these targets.