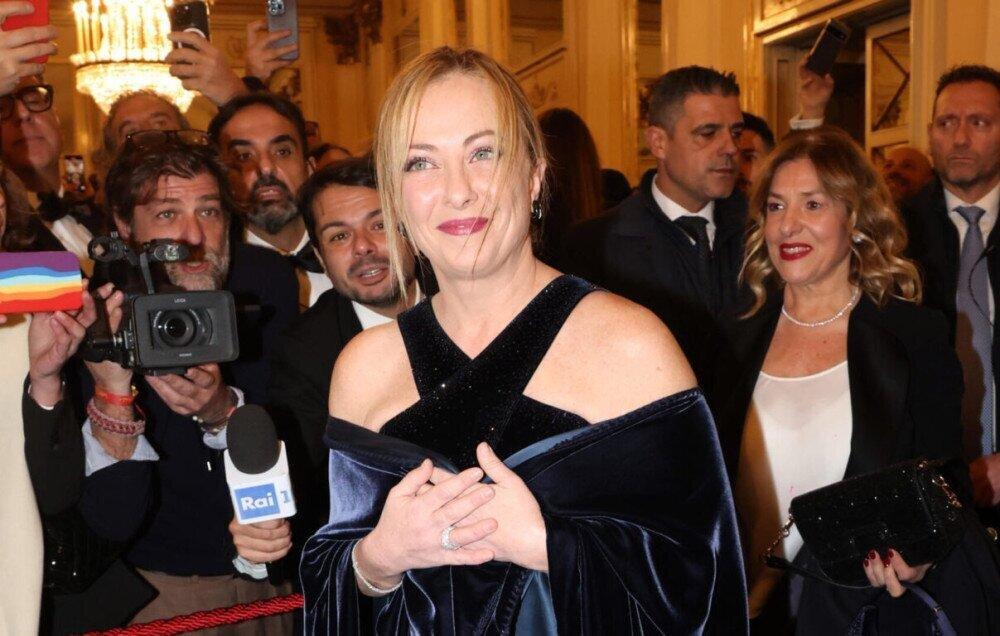 In Italy, where opera was born around the 1600s, the splendid opera house Teatro alla Scala opened its new season with the Russian opera "Boris Godunov,” an opera by Modest Mussorgsky revolving around the Russian ruler Boris Godunov, who reigned as czar from 1598 to 1605.

A group of about 30 Ukrainians gathered outside the theater to protest highlighting Russian culture while President Vladimir Putin wages a war rooted in the denial of a unique Ukrainian culture.

They were kept across the main piazza, far from any interaction with arriving dignitaries and officials, and politics did not enter the theater.

The crowd of most prominent figures from Italian business, culture and politics showered the production with 13 minutes of applause. The loudest praise was reserved for Russian bass Ildar Abdrazakov in the title role along with a cascade of flowers for chief conductor Riccardo Chailly.

Asked about Ukrainians' objection to putting a spotlight on Russian culture as war rages in its tenth month, von der Leyen praised Ukrainians as "fantastic, brave and courageous people,” but said that Russian culture should not be conflated with Putin.

"We should not allow Putin to destroy all this," von der Leyen said, referring to great Russian writers and composers, including Modest Petrovic Musorgsky, author of "Boris Godunov.” She added: "Full solidarity with our friends in Ukraine, and let's make sure that we stand together.”

Meloni, who has maintained Italy's support for Ukraine in defending itself against Russian aggression, also sought to draw a line between culture and politics.

"We have nothing against the Russian people, Russian history, Russian culture,” Meloni said. "We have something against those who have made the political choice to invade a sovereign country.”

A letter of protest from Ukraine's consul in Milan and a petition by the Ukrainian diaspora failed to persuade the theater to drop "Boris Godunov.” La Scala officials say Chailly chose the opera as the 2022-23 season opener three years ago at Abdrazakov's suggestion, and it was too late to substitute the production.

Abdrazakov was heralded for his sixth La Scala season premiere performance, the first in his native language, leading a mostly Russian cast along with La Scala's chorus.

"I have sung here in Italian, in French, once in Italian, but in Russian, it is another thing entirely. And then, this opera, I adore it very much,'' Abdrazakov said backstage.

Danish director Kasper Holten's said he sought to emphasize the opera's message about "the cynicism of power,'' which he said remains relevant over 150 years after it was written. In Holten's staging, Godunov is haunted by the bloody presence of the child prince he killed to become a czar, and then has to confront bloody depictions of his own cherished children, foreshadowing their own fate.

"This is sadly a reminder to us that wherever there’s a lust for power, it’s also the language of blood,'' Holten said backstage.

La Scala management has insisted that "Boris Godonov” was not propaganda for Putin. Still, Russian media widely reported on the production, focusing on officials' dismissals of the Ukrainian protests. Russian state TV was also on hand for opening night.

In the piazza, Ukrainian protest organizers were unpersuaded by the attempt to keep politics out of culture.

"I don’t know why Italians tend to think Russian culture has nothing to do with the Russian government or the Russian people. It is all intertwined with the medieval mentality that created Putin,’’ said Valeriya Kalchenko, a native of the Ukrainian city of Kharkiv and long-time Milan resident who organized a protest.

She noted that the Polish National Opera in Warsaw canceled its scheduled April performances of the same opera just days after Russia invaded Ukraine in late February, citing the suffering of the Ukrainian people. It said it would consider staging the opera in peacetime.

"They could have reacted in the same way, because La Scala at the beginning of the war had nine months to substitute the opera with an Italian opera. There is no shortage of them; it is an Italian art form,’’ Kalchenko said.

Other Ukrainian organizations, including a youth association, decided against physically joining the protest despite objections to the Russian production. Instead, they gathered silently, holding sheet music written by a Ukrainian composer.

Zoia Stankovski said that "muting” Russian culture during the war "would be a gesture, a sign of solidarity, with Ukrainians, and a clear message as long as the aggression is ongoing."

La Scala management has emphasized its support of Ukraine, including a benefit concert that raised $421,000. La Scala was also the first theater in the West to cut off relations with Russian conductor Valery Gergiev, who was engaged at the Milan theater when the war broke out after he failed to express a desire for a peaceful solution.

The gala season opener, which is held on the Dec. 7 holiday for Milan's patron St. Ambrose, is one of the top events on the European cultural calendar, and often attracts protests aimed at grabbing the attention of Italian movers and shakers in attendance.

In that tradition, climate protesters early Wednesday threw paint on the opera house’s columns to promote more urgent actions to curb climate change. The paint was quickly removed. And union protesters set up near the Ukrainian protest, adding "no war” to their manifold slogans, AP reports.