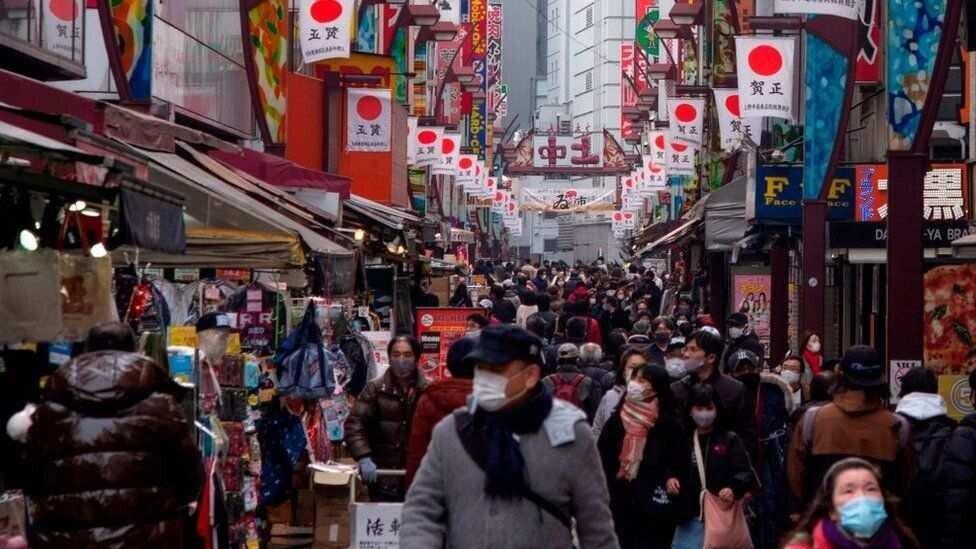 Back
Japan's economy surged in the fourth quarter of 2020, but it was not enough to keep the country from negative growth for the year.
The economy beat expectations to grow by 3% between October and December compared to the same period in 2019.
But growth was considerably slower than in the previous quarter, when the economy expanded 5.3%.
Japan's economy shrank 4.8% over the full year, its first contraction since 2009.
The growth figures come as Japan's Nikkei index briefly hit 30,000 for the first time since 1990.
The world's third-largest economy suffered its worst post-war quarterly contraction between April and June, as the global pandemic hit domestic consumption and exports.
But consumption and exports, which are both key drivers of the Japanese economy, also fuelled a rebound in the second half of the year.
Private consumption, which makes up more than half of the economy, rose 2.2% in the final quarter of 2020, slowing from the 5.1% increase in the previous quarter.
Stronger economic growth globally in the third and fourth quarters also helped Japanese businesses sell more of their products overseas.
Annualised growth - which assumes the quarter's growth will be maintained for the whole year - was 12.7%, suggesting Japan could be on track for a strong and rapid recovery.
But growth is still fragile, and could be hampered by restrictions aimed at limiting another wave of Covid-19.
Takumi Tsunoda, senior economist at Shinkin Central Bank Research, expects the recovery to struggle because Japan lags behind western economies in vaccine distribution.
"The conditions are such that Japan will not be able to avoid negative growth in the first quarter," he told Reuters.
"There is a high possibility that there will be a repeating cycle of coronavirus infections spreading and being contained this year, which means that consumption is not likely to recover at the expected pace."
In December, the government announced another round of stimulus aimed at pulling the world's second largest economy out of its slump.
The 73.6tr yen ($708bn; £530bn) package took Japan's total stimulus spending to around $3tr.
Source: BBC
Covid19 Japan economy