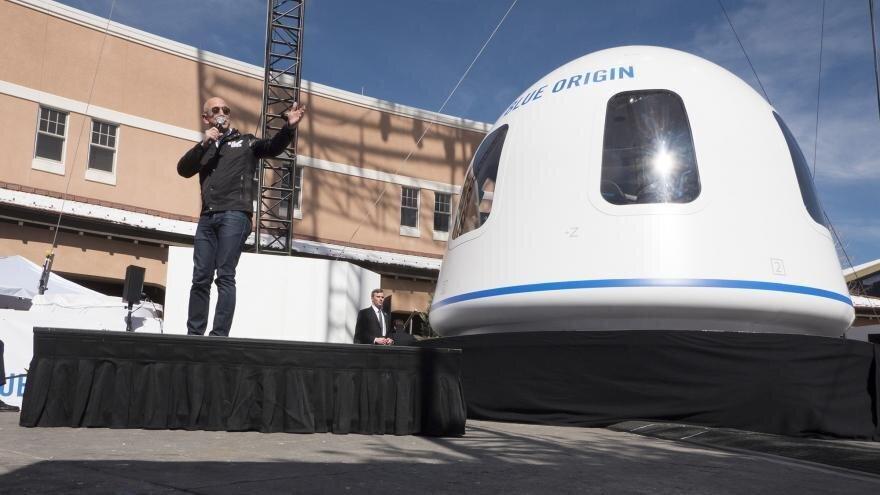 Back
Blue Origin — after spending more than six years developing its space tourism rocket, New Shepard — has finally set a date for its first commercial passenger mission, July 20, and announced that one of the first passengers will be the winner of an online auction.
Anyone can place a bid on the company's website, according to a tweet posted Wednesday morning.
The first round of bidding will run from May 5 to 19, and the bids will be sealed, meaning nobody will be able to see how much other people offered. An unsealed round of bidding will begin May 19, and finally a live auction on June 12 will conclude the contest.
The proceeds from the auction will be donated to Club for the Future, a youth-focused foundation meant to inspire kids to study science and technology.
It's not clear how much the ticket is expected to fetch, nor did Blue Origin say who else will be on the first flight or how much they paid for their seats. The auctioned seat will be the only seat for sale to the public on this first flight, with the other seats filled by those selected by Blue Origin.
According to the company's website, there are a few limitations on who can take a New Shepard flight: Everyone must be 18 years or older, be in good enough physical shape to climb seven flights of stairs in a minute and a half, be between 5'0" and 6'4" in height and between 110 pounds and 223 pounds in weight.
Passengers must also be able to fasten and unfasten their seat harness in less than 15 seconds, spend up to an hour and a half strapped into the capsule with the hatch closed, and withstand up to 5.5G in force during descent.
Blue Origin was founded 21 years ago by Amazon billionaire, and the world's richest person, Jeff Bezos. New Shepard, a fully autonomous spacecraft that can carry up to six people, has taken more than a dozen automated test flights with the cabin empty at Blue Origin's facilities in Texas, nearly all of which have gone as expected.
New Shepard consists of two reusable pieces — a small, dome-shaped capsule with gaping rectangular windows, and a 60-foot-tall rocket booster that blasts the capsule at up to three times the speed of sound as it hurtles toward outer space.
Enter your email to receive CNN's nightcap newsletter.
The capsule is designed to detach from the rocket near its peak, climbing more than 60 miles high and spending a few minutes suspended in weightlessness before parachuting back to Earth. All told, future passengers will spend a total of about 10 minutes in the air and climb to more than 60 miles above Earth.
Blue Origin's ticket prices have been the subject of speculation for years. Meanwhile, Blue Origin's direct competitor, Virgin Galactic — the suborbital space tourism company founded by British billionaire Richard Branson in 2004 — has long been pre-selling tickets. The company has a backlog of more than 600 people who will fork over between $200,000 and $250,000 each for a ride to space. (Virgin Galactic has twice conducted test flights to space, and after many delays, the company now states it has several more test flights to conduct before it will fly paying customers.)
Blue Origin named its spacecraft for Alan Shepard, who became the first American to travel into space 60 years ago.
"In the decades since, fewer than 600 astronauts have been to space above the Kármán Line to see the borderless Earth and the thin limb of our atmosphere.
They all say this experience changes them," the company said in an email announcing its auction. (The Kármán Line is the altitude that is internationally considered the boundary to space. It's 100 km or about 62 miles).
After a "meticulous and incremental flight program to test" New Shepard, the email said, "it's time for astronauts to climb onboard."
Source: CNN
Jeff Bezos Space Tourism