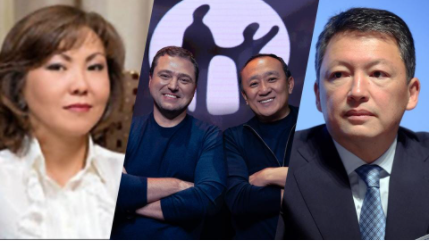 The fortunes of the billionaires behind some of Kazakhstan’s best known businesses have tumbled in recent days as the country reels from sprawling national protests against the ruling regime.

Together, four Kazakh billionaires–including a daughter and son-in-law of the former president, are $3 billion poorer than they were on January 4. Protests were triggered by a sharp hike in gasoline prices last week, which quickly morphed into anger over alleged corruption in former longtime President Nursultan Nazarbayev’s political system.

Shares of two big banks–Kaspi and JSC Halyk Bank–cratered as protestors burned public buildings and toppled statues. According to a report on Friday from Benjamin Godwin, central Asia expert and head of analysis at U.K.-based PRISM Political Risk Management, the Nazarbayev family left Kazakhstan on January 5 for Moscow in five private jets. A contact, described in the report as “a minor figure in the Nazarbayev family,” said the Nazarbayevs, known to be Putin loyalists, were travelling to Moscow to “be with the family.”

Billionaire Vyacheslav Kim, the largest shareholder and chairman of London-listed Kaspi Bank, Kazakhstan's largest payments and fintech company, is $1.4 billion poorer, as Kaspi’s share price plunged 30% from $118 on January 4 to $87 on January 6, taking his estimated net worth from $5.7 billion to $4.2 billion.

Mikhail Lomtadze, a Kazakhstan-based native of the republic of Georgia and Kaspi’s CEO, is nearly $1.4 billion poorer; his estimated net worth crashed from $5.2 billion on January 4 to $3.8 billion on January 6 across two nights of uncertainty in the country. The share price fell following reports that banks including Kaspi and Halyk would not process pension payments until the end of the government-declared state of emergency, planned for January 19.

Nazarbayev’s daughter, Dinara Kulibaeva, and her husband, Timur Kulibaev, have lost a combined $200 million as the value of their stake in London-listed JSC Halyk bank fell 16%. The couple, who Forbes estimates to be worth $3.1 billion each, owns a majority share of the bank, plus sprawling real estate and private investment portfolios.

Timur Kulibaev, age 55, rose up through the ranks in Kazakhstan’s natural mineral industry to become chairman of Samruk-Kazyna National Welfare Fund, later sitting on the board of Russian energy giant Gazprom. In 1992, during the early days of privatisation in Kazakhstan, Kulibaev formed the investment group Altyn Alma to capitalise on the country's emerging opportunities; his group later morphed into Almex LLP. Success came in 2004, when a company he controlled sold Kar-Tel, operating in Kazakhstan, to VimpelCom for $350 million. In 2014, he sold Altynalmas Gold to Polymetal, part-owned by Russian billionaire Alexander Nesis, for cash and company shares. Nazarbayev has three daughters; Dinara, the second oldest, is married to Kulibaev.

What’s next for Nazarbayev, the man who led Kazakhstan from the 1990s to 2019? He is “no longer present as a political force” within the country, according to Godwin of PRISM. Describing the developments as “the end of the first stage of the transition,” Godwin adds that the second stage is likely to be “extremely complex” owing to the “omnipresence of the Nazarbayev family” in Kazakhstan's post-Soviet system of state capitalism. He expects a period of transition.

The Nazarbayev family may eventually look to London for sanctuary. According to a recent report by OpenDemocracy on kleptocratic wealth in the U.K. real estate world, the extended Nazarbayev family owns some $450 million worth of luxury property in the country. Notably, U.K.-based investigative news platform SourceMaterial revealed that Nazerbayev’s daughter Nazarbayeva and her son are the owners of 221b Baker Street, the fictional home of the character Sherlock Holmes. A spokesperson for the Nazarbayev family could not be reached for comment.

The famous address is just a tiny part of the Kazakh assets in London. In April 2020 Forbes covered a government agency’s failed attempt to make the family of Nazarbayev explain ownership of three London properties disclosed to be worth $52 million, $43 million and $12 million, respectively.