Khazaradze about Kvesheti-Kobi Road: why are we building a highway for Russia to roll their tanks? 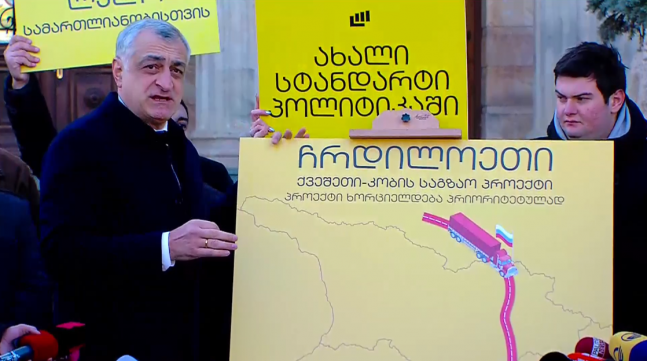 Mamuka Khazaradze, founder of the Lelo political unio, spoke about Anaklia deep-sea port and Kvesheti-Kobi road projects and compared them with each other.

As Khazaradze noted, the state plans to allocate half a million GEL for construction of Kvesheti-Kobi road, while it refused to allocate the guarantee in the amount of GEL 50 million for much larger Anaklia Development Project.

“The state did not show the will to give us a $ 50 million guarantee, while the state provided half a million GEL for Kvesheti-Kobi road project. This is the road to Kazbegi that is directly in Russia's interest. We are taking half a million in debt and investing the money in a project that gives a new opportunity to the country, which has occupied 20 percent of Georgia, to roll its tanks comfortably,” Mamuka Khazaradze said.