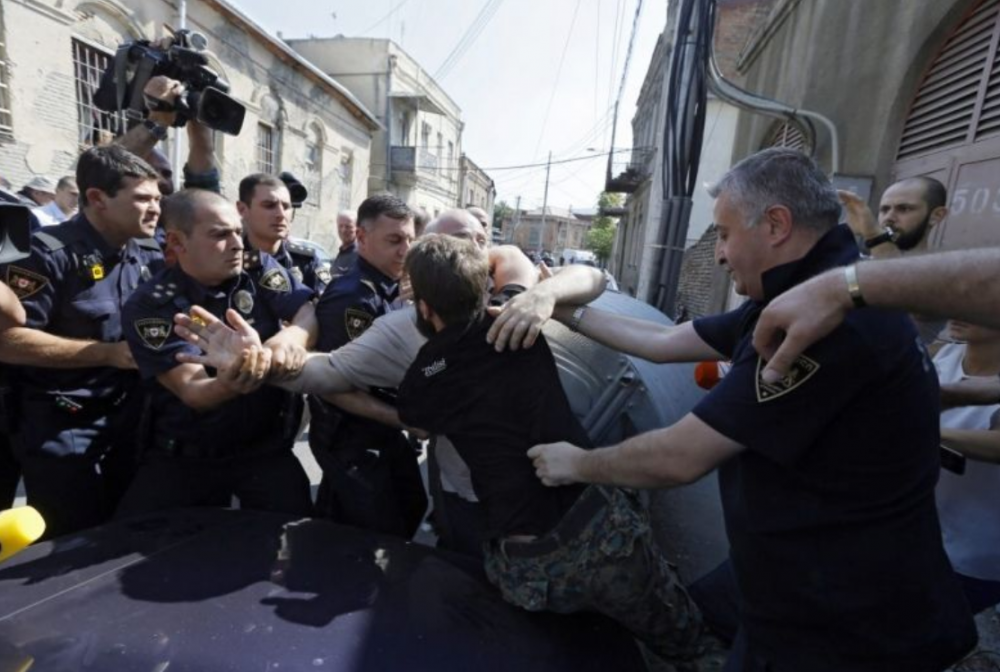 For many years we’ve been observing the techniques of the Kremlin’s malign influence in many countries, including interference by the Kremlin in elections in the U.S. and in various European countries. The usage of the social networks and media outlets as a propaganda weapon and the financing of pro-Kremlin forces are becoming old hat, which we are getting used to.

Georgia, which is well-known for its reforms as well as its European and Euro-Atlantic aspirations, is not an exception. After the 2008 Russia-Georgia War, when Putin’s regime attacked Georgia and occupied 20% of the country, the Kremlin has been using all possible means to disrupt Georgia’s development and threaten its national security and democratic development as a free and sovereign state.

We regularly witness the creeping annexation of more of Georgia’s territory, we see hybrid war, economical and political pressure, and the placement of military bases on areas of Georgia that are under Russia’s control. Propaganda and disinformation from the operators of the Kremlin’s influence, which include politicians, journalists, NGOs, and activists who are inside the country, are also commonly used against Georgia with the goal of undermining its close ties with the West.

Elections in Georgia are scheduled for October. They have been put under permanent pressure from Moscow since 2019. Starting in March of last year, the Kremlin initiated conferences and disinformation campaigns, naming Turkey and Azerbaijan enemies of Georgia and offering Georgians alternative threats instead of the Kremlin itself.

The Georgia-Russia Center, which was officially funded by the Russian Ministry of Foreign Affairs through the Gorchakov Fund, arranged a conference called “Georgia: Between Turkey and Russia”, where speakers of the conference suggested that the Georgian people need to rethink “who is the real enemy of the country”.

This campaign was supported by Georgia’s pro-Kremlin media outlets like Sputnik, Saqinform, EADaily, and others as well as by a blatantly pro-Kremlin political party known as Alliance of Patriots. This political faction is a well-known supporter of dialogue with Putin and a notorious opponent of introducing Western values and democratic development in Georgia.

The pro-Russian “alliance” has initiated anti-Turkey and anti-Azerbaijan rallies, as well as campaigns to put pressure on relations between ethnic Azeris, in Georgia, and their Georgian neighbors.

This long-term Kremlin’s campaign included different messages that went beyond “alternative enemies”, but also presenting Russia as “a good neighbour”, but “bad regimes” in Tskhinvali and Sukhumi (the capitals of the two breakaway Georgian regions of Abkhazia and South Ossetia); “a common history and tie as majority Orthodox Christian nations”; a weak West”; “NATO will never accept Georgia”, etc.

All these forms of disinformation and manipulation that have been initiated by the Kremlin’s operators in Georgia were publically supported by Alliance of Patriots, as well as other local malign influence coordinators.

Equipped with these facts, no one was surprised to see recently published information, which had been prepared by the well-known centre called “Dossier”, which is owned by prominent Russian dissident Mikhail Khodorkovsky, where the authors of the material describe who and how the activities of the Alliance of Patriots are coordinated in Moscow.

According to the dossier, the Kremlin is directly interfering in Georgia’s elections and is using the same techniques as were used many other times in other countries. It is highly important for the expert community, including for diplomats and the Georgian authorities. to take a closer look at the reports contained in the dossier in order to protect Georgia from further Kremlin interference.

When the dossier was first published, my own Russian-language Georgian media project “Border Zone” was the first to distribute the material for the Georgian audience. This resulted in a political scandal, though it was always and widely known that the Alliance of Patriots was actively promoting pro-Kremlin positions in Georgia. The dossier, however, provided evidence and facts that fully illustrated the direct connections between the party’s leaders with Putin’s administration.

It is important to remember that the Alliance of Patriots is the only political party from Georgia that occasionally visits Moscow. As a result, Russian state propaganda and its allies in Georgia promote “friendship between Georgia and Putin’s regime” at a time when an occupying Russian army sits less than an hour’s drive from the Georgian capital.

Since the dossier’s publication, the Alliance of Patriots, as well as all other pro-Russian forces in Georgia, have started a massive campaign to discredit me personally. The leaders of the party distribute disinformation about me and try to involve me and the Free Russia Foundation in domestic politics. They have labelled me “an agent of Saakashvili” (a reference to the former president); “a Kremlin agent”; they promote hate-speech towards me personally, as well as towards the Free Russia Foundation and its leadership, which are well-known and authoritative American experts and diplomats, as well as respected Russian opposition representatives.

The Alliance of Patriots paid for social media posts and prepaid articles in popular Georgian media outlets (articles that were marked as “advertisements”) to attack both me and the Foundation. Their disinformation campaign is also an attempt by the Alliance” to put an accent on people who distributed “Dossier” materials, but not on facts mentioned in materials itself.

The leadership of the Free Russia Foundation support me as the director of the South Caucasus office and distributed a public statement which said that “We are concerned that Mr Egor Kuroptev, the director of the Tbilisi office of the Free Russia Foundation who posted the dossier information on his Facebook page, has become the target of a campaign to discredit him from the same sources mentioned in the dossier reports. Other individuals known for their anti-Western and anti-American sentiments have chimed in on social media to attack Mr Kuroptev, who represents the foundation in the South Caucasus and is a well-respected expert. Such actions are unacceptable and undermine freedom of speech and the values of a democratic country”.

It is crucial to underline that the upcoming elections in Georgia in October are aggressively targeted by the Kremlin and its supporters. These elections are very important for the country’s future and to guarantee that Putin’s regime does not fundamentally upend Georgia’s path towards the EU and NATO. It is for these reasons that it uses its allies in Georgia to attack individuals such as myself and organizations like the Foundation, which is totally unacceptable and should be considered a national security threat.

I would like to call on the international community and Georgia’s strategic partners to take all necessary actions to help the Georgian government protect the country, its democracy, and the people living there. All Georgians and true friends of Georgia and democracy should work together to prevent Moscow’s attempts to interfere in the upcoming elections, in Georgian politics and, more broadly, in the country’s democratic development and Euro-Atlantic aspirations.