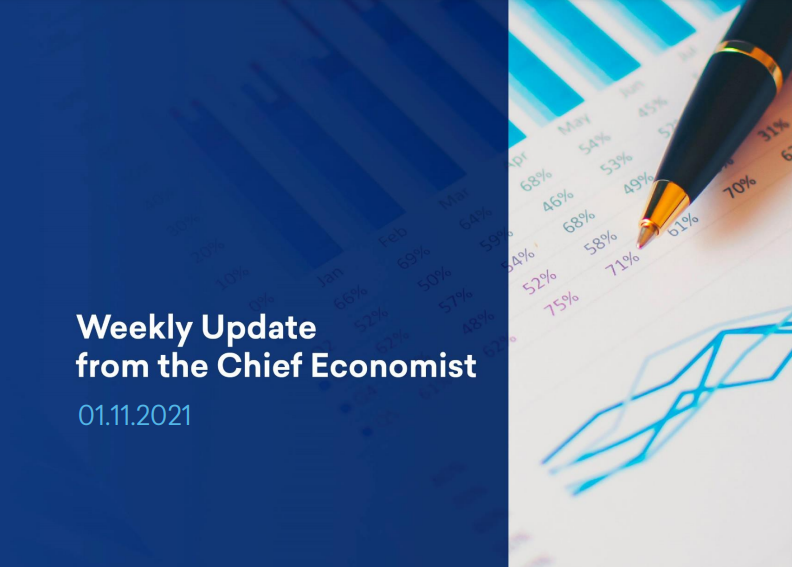 According to GeoStat, real GDP is estimated to have grown by 6.9% YoY in September 2021. Although it appears that the growth rate has bottomed out, it actually reflects the impact of base effect from a year ago. The restart momentum remains solid, as the economy expanded by 6.2% when compared to 2019 level.

Contractionary fiscal stance, which is observed since June, continued in September. Though, the negative impact was
still being compensated by recovering, especially as September sawtourism inflows, a marginal, yet still improvement in tourism revenues compared to August, which was hit by surging COVID-19 cases and related travel restrictions from source countries. Exports, imports, and remittances moderated on an annual basis, however, also reflecting a high base effect of September 2020, as the performance when compared to 2019 levels was strong. Similar to external sector, which supported the economy, strong credit activity contributed to the growth as well.

From the sectors perspective, growth was similar to that of the previous month, excluding the construction, which managed to turn the contractionary trend around, thus mining being the only sector experiencing a decrease. Overall, monthly GDP and its drivers in September continue to point to a strong rebound in FY 2021. While rising COVID-19 cases, flagging vaccination rates, and election-related uncertainties all pose downside risks to the growth, the baseline still appears to be around 1 PP stronger than our earlier 10.5% expansion scenario.

In the meeting held on October 27th, the NBG kept the policy rate unchanged at 10%, in line with our expectations. In the press release published after the meeting, it was emphasized that in addition to the high course of international oil and food prices, the increase in inflation was driven by rising international transportation costs. Also, pointing out that the policy rate will remain tight as risks of accelerating inflation are still relevant. As for the growth, it was stated that the aggregate demand remains strong and the NBG updated the growth projection for FY 2021 from 8.5% to 10.0%.

September statistics of interest rates on market deposits indicate to a further widening of difference between national and foreign currency yields, on the back of resumed rising rate on GEL. As for the FC yields, they remained broadly unchanged. We keep our view of low onshore rates on FC denominated deposits persisting for a while, in spite of expected normalization of international rates.

As banks stretched out raising funds via deposits, thus increasing the yields, which they are offered at, the widening gap to refinancing rate made central bank’s facility relatively attractive. This is evidenced by increasing volume of claims of the NBG on commercial banks even with the central bank further supplying national currency by purchasing treasury securities, being substitute for refinancing loans.

However, while overall GEL supply expressed as M2 has recovered, it still remains moderate. The GEL funding deprived market is also evident in commercial banks’ liquidity by currencies. Post-election depreciation expectations and related conversions from national to foreign currency are further fueling the lack of GEL funding. Assuming relative stability of lari after elections, we expect reversal of these conversions. This, together with stronger currency inflows in October, as shown by TBC data, may lead to appreciation pressures on the GEL. Thus, we do not rule out the NBG buying reserves, as we do not see an appetite neither for strong depreciation
of the GEL nor for its strong appreciation.