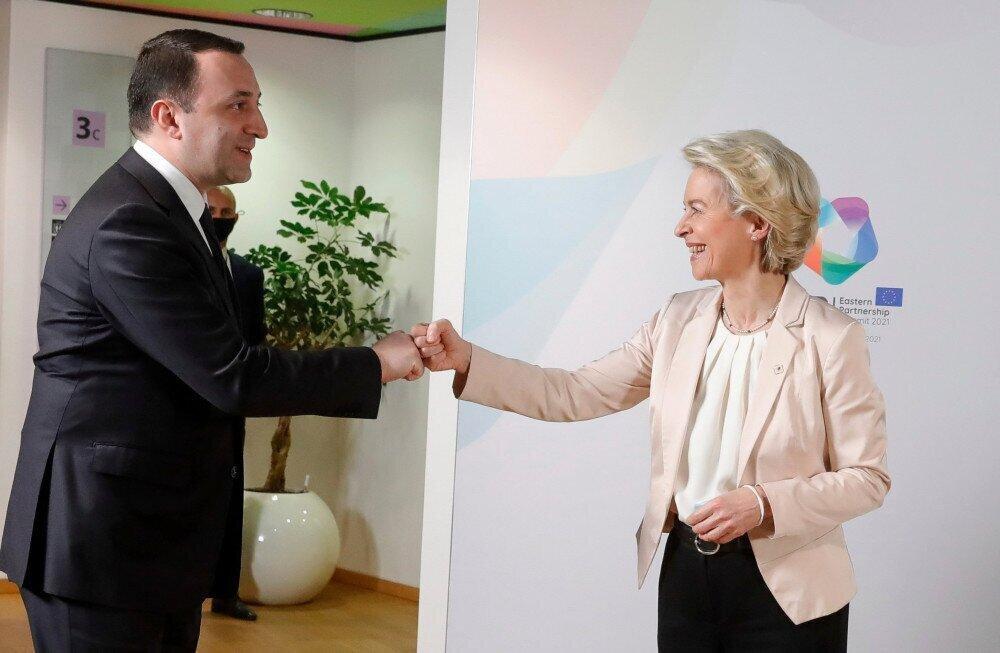 Georgian Prime Minister Irakli Garibashvili on Monday issued a letter to Ursula von der Leyen, the President of the European Commission. BMG offers its readers an integral text of the Prime Minister’s letter:

"As you may well be aware, a resolution was passed about Georgia by the European Parliament on June 9, 2022. Sadly, it contains multiple groundless entries and factual inaccuracies, in relation with which I stand ready to provide detailed information if need be.

Concern is expressed in the referred Resolution “over the destructive role played by the sole oligarch, Bidzina Ivanishvili, in Georgia’s politics and economy, and the level of control he exerts over the government and its decisions, including those on the politically motivated persecution of journalists and political opponents”. Resolution also seems “deeply worried by Ivanishvili’s exposed personal and business links to the Kremlin, which determine the position of the current Government of Georgia towards sanctions on Russia”. In addition, it “calls on the Council and democratic partners to consider imposing personal sanctions on Ivanishvili for his role in the deterioration of the political process in Georgia”.

The above entries of the Resolution passed by the European Parliament are not based on any evidence and are aimed to discredit the current system of governance in Georgia. Opponents have never produced any evidence of Bidzina Ivanishvili intervening in politics or justice; besides, he no longer runs businesses in the country and no precedent of any kind exists on alleged personal or business connections with Russia. Thus, everything that was noted in the Resolution about informal governance is totally fictional.

Due to clear reasons, I will not elaborate on the outstanding contribution made by Bidzina Ivanishvili in ending the undemocratic rule in Georgia in 2012 and in ensuring the fundamentally democratic progress of the country from 2012.

I will only focus your attention on absolutely ungrounded accusations about informal governance, which is particularly insulting to me. Allegations on the government run by an individual who left politics by his own will a year and a half ago, rather than by its Prime Minister, is offensive to me personally and to my country.

Besides, entries to the Resolution are used by the radical wing of the opposition to further deepen the polarization in Georgia and it is problematic to my country for that matter as well.

Also, Resolution was directly used by a Swiss bank to put the disbursement of trusted funds back to Bidzina Ivanishvili on hold. Thus, the bank uses the document produced by the European Parliament to infringe the lawful right of the former Prime Minister of Georgia, which is discrediting the country as well.

I am thrilled that the European Commission and Council did not share the absolutely ungrounded calling of the European Parliament and I express my gratitude to you personally for this.

Nevertheless, it is essential that the European Commission expresses its clear position on these ungrounded accusations conveyed in the referred Resolution to fully neutralize the negative impact of the Resolution passed by the European Parliament. Clear position of the European Commission is an essential precondition for staying away from deepening the perception of unfairness among the Georgian people towards European institutions and for keeping the radical wing of the opposition away from deepening the polarization on the grounds of the Resolution passed by the European Parliament.

In addition, assessment document published by the European Commission on Georgia, mentions a term “de-oligarchisation” similar to documents related to Ukraine and Moldova. Our political opponents and their lobbyists within the European Parliament actively refer and note that European Commission made an entry on deoligarchisation in its document because of Bidzina Ivanishvili. As I already noted, Bidzina Ivanishvili has no formal or informal influence on the Georgian politics or media and he may not be deemed oligarch by any legal or political criteria. In contrast with the aforesaid, there are several affluent individuals with criminal track records, who have an active influence on politics and media in favor of the radical wing of the opposition. I cannot urge you to label them as oligarchs, though to make sure that the assessment document of the European Commission is not used to manipulate or discredit the governance system in Georgia, I would urge the Commission to clearly distance itself from the personification of an entry about de-oligarchization. In this case as well, clarity of the position expressed by the European Commission is essential to leave no space for speculation, to maintain a high degree of trust towards European institutions in Georgian society and to facilitate a decline in the polarization in the country.

As an attachment, please find enclosed my letter published in Georgia several days ago with a detailed clarification of main values and principles that are guiding the governance system in my country. I believe that the referred letter will give you a clear impression on why the radical wing of opposition is fighting against Bidzina Ivanishvili, even after his total exit from politics", - the letter reads.