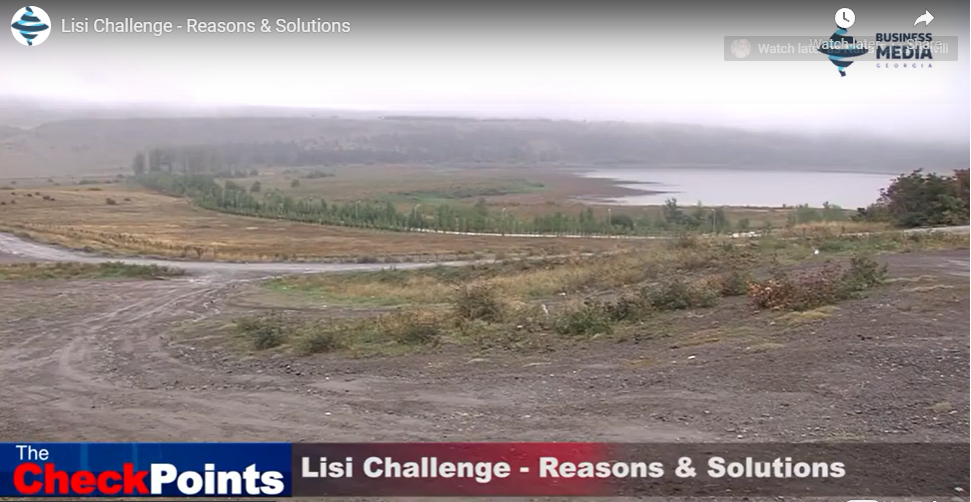 Lisi Lake  is shrinking and water level is down by 2 meters, where fish used to swim, there is now a rocky shore. This is not the first case when Lisi Lake is facing drying up. The problem was created to the lake in1990s. Bit by bit, the lake began to retreat. As the lake shrank, the area became less accommodating and the vegetation and fish died off.

Environmental Expert Nino Chkhobadze declares, that in the 1990s the problem was very acute, as water level in Lisi lake was down to 20 centimeters, but they managed to save the lake with the engagement of Tbilisi City Hall and environmental experts. Nino Chkhobadze noted, that then they set up a special commission, which made a relevant conclusion within a month and found the water source.
According to her, Lisi Lake began to recover soon and reached 80 centimeters by the spring of the next year.

Nino Chkhobadze notes that now the lake faces drying up because of the chaotic construction and damaged water channels. According to her, Tbilisi City hall, as well as developers and Ministry of Environment Protection and Agriculture must be engaged in the recovery process of Lisi Lake. As Chkhobadze notes it does not need much financial resource.

“Active construction is carried out at the nearby area of Lisi Lake. Price of residential real estate is quite high because those buildings are located close to the lake. I think developers must be interested to invest money and save the lake. The first thing that needs to be done, is setting up a commission, which will include state structures as well. I want to note that this is not related to the large financial expenditures. The commission will evaluate the current condition. After which, they make a conclusion and write an action plan”, Chkhobadze declares.

The CheckPoints spoke to Ramaz Akhvlediani, head of the Lisi Lake Tourist and Recreation Complex. He noted that in the 1990s, the company managed to save the lake, as they found groundwater on Nutsubidze Plateau 4.

"We found groundwater on Nutsubidze Plateau 4, where we set up a pumping station with a 3 km water pipe. So Lisi Lake received about 500 cubic meters of water per day and as a result, the water in the lake returned to the old level”, - Akhvlediani declares.

As Ramaz Akhvlediani notes, Lisi Lake Tourist and Recreation Complex received the license for water use in 1999. But later, the license was suspended due to the amendments made to the legislation. Eventually, in 2020 the dispute ended in favor of the company, but Akhvlediani took over the lake with an old problem, as the lake is still shrinking.

On the other hand, Tbilisi City Hall declares that The city government is going to conduct a hydrological survey and find the historical water source, which supplied the Lake. The city hall will also examine the condition of old water channels and if they are damaged, alternative sources will be found.

Until experts, government agencies and the private business decide how to save the Lake, Tbilisi citizens and its guests can lose an important recreation zone, which would be equal of the tragedy.