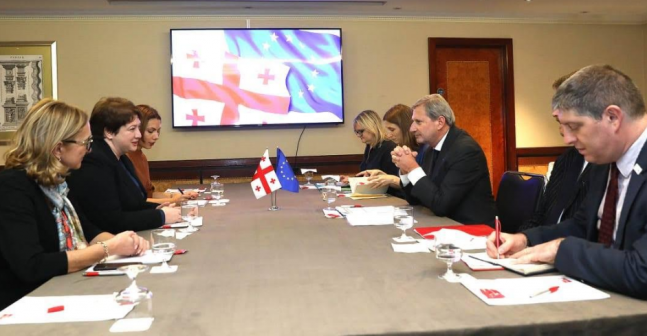 Georgia is a leading country in terms of development and relations with the EU. The country has made tremendous progress in the recent years, - European Commissioner Johannes Hahn has declared at the meeting with Maia Tskitishvili, Georgia's Deputy Prime Minister and Minister of Regional Development and Infrastructure.
The EU's significant support to Georgia has been focused at the meeting. It has been noted that numerous programs have been implemented, including further steps towards European integration.

The importance of the European school and education sector were also emphasized at the meeting.

One of the topics discussed in the context of regional development was the initiative of Commissioner Johannes Hahn, which envisages selection of concrete regions and offer additional projects, depending on their specificity.
Discussions also concerned to the ongoing reforms and political processes in Georgia.

The meeting between Maia Tskitishvili and Johannes Hahn was held in London within the framework of the Investment Forum of the European Bank for Reconstruction and Development.