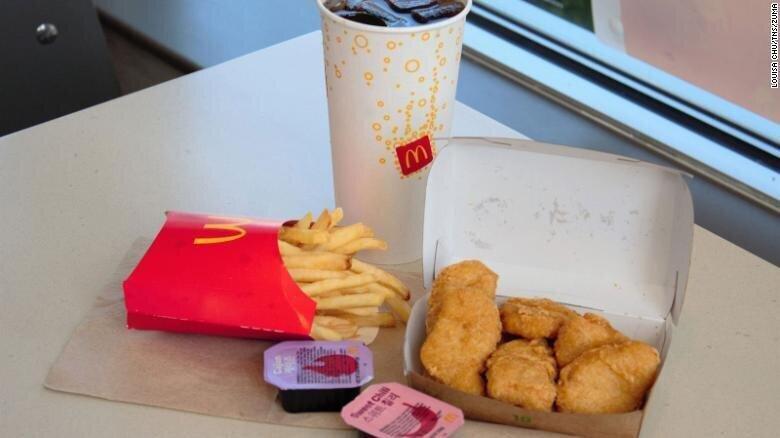 Back
McDonald's celebrity meal strategy and revamped chicken sandwich lineup is working.
Sales at US stores open at least 13 months jumped 25.9% in the past quarter, which ended on June 30, beating analysts' expectations. Sales at those stores grew 14.9% compared to the same period in 2019, before the pandemic.
McDonald's said the BTS meal and crispy chicken sandwich helped the company grow in the quarter.
The chain started selling the BTS Meal, named for the popular K-pop band, in May for a limited time. It included a 10-piece order of Chicken McNuggets, medium fries and Coke as well as two dipping sauces — sweet chili and Cajun flavors — inspired by McDonald's South Korea recipes and new to the United States. It was the first celebrity collaboration to go on sale globally.
To support the promotion, McDonald's introduced a limited-edition line of merchandise and ran a television commercial, among other things.
McDonald's has seen success with its line of meals named for musicians and inspired by their preferences. Prior to the BTS collaboration, McDonald's partnered with J Balvin and Travis Scott. The Travis Scott meal was so successful, some locations ran out.
The company launched its much-anticipated line of chicken sandwiches in February. Competition in the chicken sandwich space has been heated, with Wendy's, ​​Burger King and others revamping their offerings this year. Popeye's recently introduced a new spin on its own sandwich, which has been wildly successful, with bite-sized nuggets.
In addition to the menu items, McDonald's said bigger order sizes and higher menu prices helped its US business grow in the quarter. Increases in delivery and digital orders also helped.
The company has tried to keep the momentum in online orders going with a national rewards program, launched in July. When customers order online, restaurants learn about their preferences and have more opportunities to keep them engaged.
McDonald's revenues reached $5.9 billion in the quarter, also beating Wall Street's expectations. Globally, sales at restaurants open at least 13 months grew 40.5% thanks to looser pandemic restrictions, among other things.
McDonald's Fast Food