Mercedes Vera Martin - Completion of the review will make $41.6 million available to Georgia 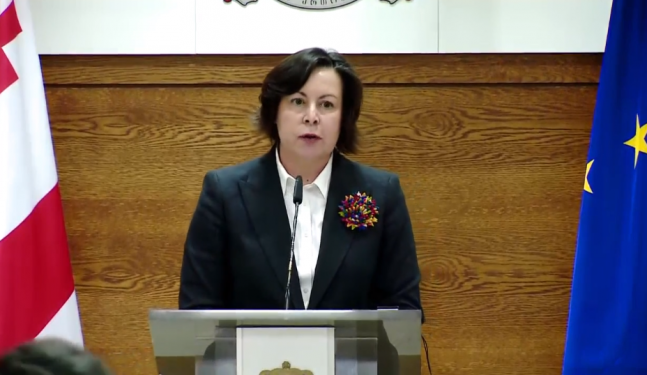 End-of-Mission press releases include statements of IMF staff teams that convey preliminary findings after a visit to a country. The views expressed in this statement are those of the IMF staff and do not necessarily represent the views of the IMF's Executive Board.

The authorities and the IMF team reached a staff-level agreement on completing the fifth review under the reform program supported by an IMF Extended Fund Facility and extending the arrangement by one year, subject to approval by Management and the Executive Board.

Despite the deteriorating external environment, the Georgian economy has exhibited resilience, and sustained economic growth is expected in 2019-20.

The program extension will build on the authorities' continued commitment to prudent macroeconomic policies and reforms to promote higher and more inclusive growth.

An International Monetary Fund (IMF) team led by Ms. Mercedes Vera Martin visited Tbilisi from October 23 to November 4 to discuss the Fifth Review and a one-year extension and rephasing of access under the Extended Fund Facility (EFF).

At the conclusion of the mission, Ms. Vera Martin issued the following statement:

"Following productive discussions, the Georgian authorities and the IMF team reached a staff-level agreement on the Fifth Review under the EFF arrangement and on a one-year extension of the program. The agreement is subject to approval by the IMF management and the Executive Board. Consideration by the Executive Board is expected in December 2019. Completion of the review will make SDR30 million (about $41.6 million) available to Georgia, bringing total disbursements under the EFF arrangement to SDR180 million (about $249.5 million).

"Performance under the IMF-supported program was satisfactory in the first half of 2019, with most commitments for the completion of the Fifth Review met.

"Growth has proven resilient in the face of external shocks. In the first half of 2019, growth reached 4.7 percent (y/y), with the current account deficit falling to a historic low (4.6 percent of GDP). Corporate credit and lari-denominated mortgages sustained credit growth. Lari depreciation has, however, increased inflation, to 6.9 percent y/y in October.

"We project growth at 4.6 percent in 2019, and 4.3 percent in 2020. Inflation is expected to decline to the 3-percent target by end-2020 as one-off factors dissipate, and monetary policy adjusts as needed. Risks to the outlook are to the downside, mostly driven by external developments.

"We welcome the authorities' continued commitment to the inflation targeting framework. The National Bank of Georgia (NBG) increased its policy rate by a cumulative 200 basis points since September 2019, and appropriately maintains a tightening bias until inflation expectations are firmly anchored around its inflation target.

"Fiscal policy has appropriately balanced infrastructure investment and social spending with fiscal discipline. Smoother execution of the budget has accelerated public investment. Tax collection has been exceeding projections, partly due to improved tax administration. The increase in the excise on rolling tobacco will help harmonize rates and preserve the tax base.

The mission agreed with the authorities on the key parameters of the 2020 budget, targeting an overall fiscal deficit of 2.7 percent of GDP. This level would preserve fiscal discipline, while making space for higher social spending. Continued monitoring of fiscal risks, including those arising from state-owned enterprises and purchasing power agreements, will help safeguard fiscal sustainability.

"The banking sector remains well capitalized, liquid, and profitable. We welcome the authorities' efforts to strengthen financial stability, including by enhancing supervision for nonbanks. The timely enactment of the new banking resolution framework, in line with best international practices, will further help strengthen financial resilience.

"The IMF team would like to thank the authorities, specifically the technical team, our international development partners, and representatives of the private sector, for the open and constructive discussions and for their hospitality."

What Do Some People of Georgia Believe About COVID-19? – Deputy Head of NCDC