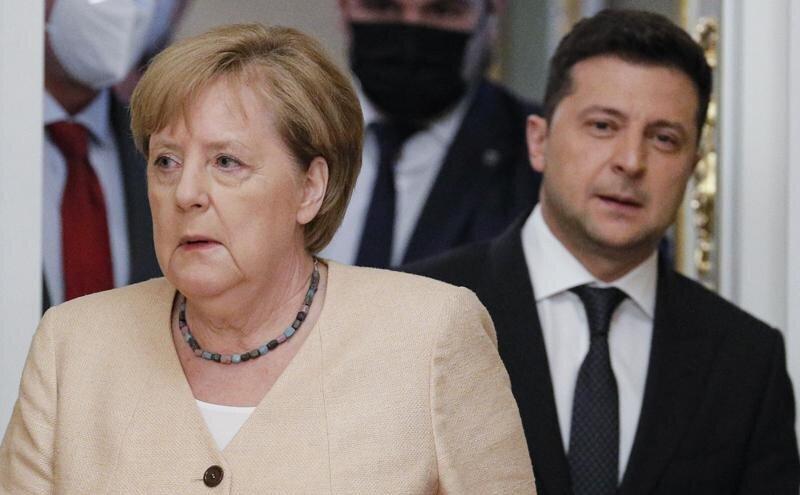 Back
Chancellor Angela Merkel sought to move forward stalled peace efforts for eastern Ukraine on Sunday and stressed Germany’s commitment not to let Russia use a new gas pipeline as a “weapon” as she made what is likely her last visit to Ukraine as Germany’s leader.
Merkel’s trip came two days after she went to Moscow to meet with Russian President Vladimir Putin. The chancellor is not running in Germany’s national election next month and is nearing the end of her almost 16-year-long leadership of Germany.

Speaking at a joint news conference with Ukrainian President Volodymyr Zelenskyy on Sunday, Merkel advocated working to get a leaders’ meeting between Russia, Ukraine, Germany and France on the situation in eastern Ukraine, the first since late 2019.
“That in my opinion would bring us progress, if we can work out a good agenda -- our advisers should do that,” she said. “I am glad that President Zelenskyy is prepared to do this.”
The fighting between Ukrainian forces and Russia-backed rebels has killed more than 14,000 since 2014.

Germany and France have worked to help broker a peaceful settlement to the conflict, including an often-violated 2015 cease-fire agreement reached in Minsk, Belarus.
Zelenskyy said Kyiv is seeking a permanent cease-fire in eastern Ukraine, a prisoner exchange, open crossings at the line of contact and to ensure Red Cross access to the conflict zone.
He supported the idea of a meeting, but urged Kyiv’s Western partners to exert pressure on Russia in order to achieve progress in eastern Ukraine.
“As long as there is no progress, the pressure on Russia should continue. We want to see active efforts of our Western partners,” Zelenskyy said.
Merkel noted that some of the goals named by Zelenskyy, like “the opening of further crossings on the line of contact or other humanitarian questions, have not yet been implemented, and that weighs down the process a great deal.”
“However, one has to say again and again: that at present, we have no other format in which can discuss these things, and so work should be continued here,” Merkel said.

She added that she expects the next German government to “work in the same spirit” with Ukraine, pushing for the country to recover its territorial integrity and enabling it to continue with domestic reforms.
The chancellor also talked up the merits of a U.S.-German deal last month to allow the completion of the Nord Stream 2 gas pipeline from Russia to Germany without the imposition of U.S. sanctions on German entities.
Ukraine opposes the project, and Zelenskyy on Sunday called it Russia’s geopolitical “weapon.”
“I believe that this is a weapon and it is not correct not to see it as a weapon,” he said. “The launch will lead to great risks and it will play into the hands of Russia.”
Merkel said she viewed the German-U.S. agreement “as a commitment by the German government to ward off President Zelenskyy’s worry, namely energy being used as a weapon.” She said she takes the concern very seriously, and pointed to Germany’s appointment of a negotiator to help secure an extension of an agreement for gas transit through Ukraine beyond 2024.
“It commits future German governments to address this issue of energy security” as well as committing Germany to help renew Ukraine’s energy mix, Merkel said.
She also assured that Berlin will “advocate further sanctions in the European framework if this suspicion is substantiated that the pipeline is used as a weapon.”
Zelenskyy, in turn, said Kyiv has initiated consultations with the European Parliament and the German government regarding the Nord Stream 2 pipeline. He added that on Monday, energy ministers from the United States, Germany and Ukraine will meet in Kyiv.
Nord Stream 2 Ukraine Angela Merkel Volodymyr Zelensky Nord Stream 2 pipeline