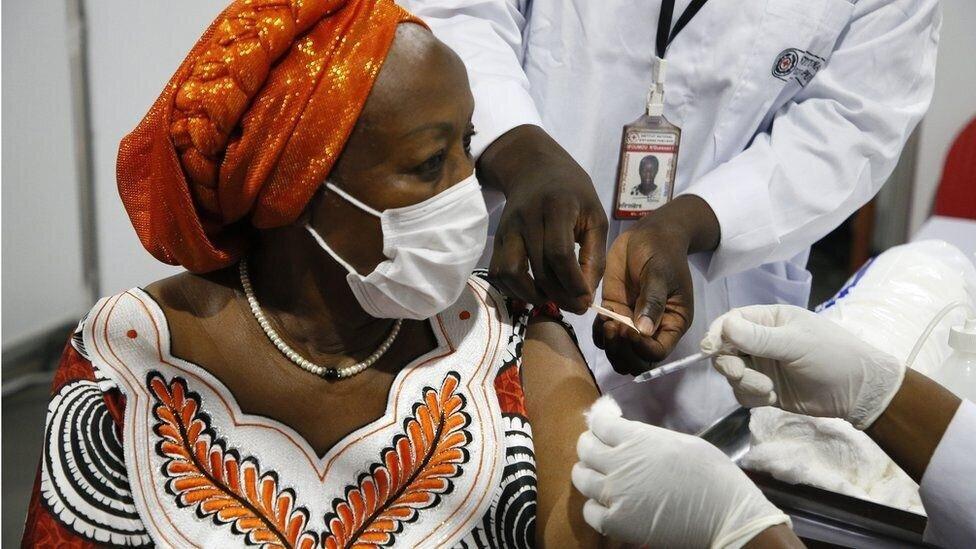 Back
Prime Minister Boris Johnson has announced that the UK will donate more than 100 million doses of Covid vaccine to poorer countries in the next year.
It follows President Biden's announcement ahead of this weekend's G7summit that the US will donate 500 million doses.
The donation will be routed through Covax - the international scheme designed to ensure low-income countries aren't left behind in the fight against Covid.
What is the Covax scheme?
Covax was created last year to ensure Covid vaccines were made available around the world, with richer countries subsidising costs for poorer nations.
The scheme hopes to distribute enough vaccines to protect at least 20% of the population in 92 low- or medium-income countries - starting with healthcare workers and the most vulnerable groups.
Its initial goal was to provide two billion doses of vaccines worldwide in 2021, and 1.8 billion doses to 92 poorer countries by early 2022.
Covax is run by a number of international organisations, including the World Health Organization (WHO) and the UN children's charity, Unicef.
Ghana was the first country to receive Covax vaccines in February.
Since then, more than 81 million doses have been delivered to more than 120 countries around the world, including Bangladesh, Brazil, Ethiopia and Fiji.
Most doses are going to poorer countries, but some are being sent to wealthier countries such as Canada, which defended its request.
Why is the G7 summit important?
Unicef has urged leaders of the G7 group of countries - who are meeting in Cornwall this weekend - to speed up the donation of vaccines.
An open letter, signed by celebrity ambassadors including David Beckham and Katy Perry, says Covax is facing an urgent shortfall of 190 million doses.
It warns that many poorer countries' health systems will struggle to cope with large donations of spare doses later in the year, meaning some could end up being wasted.
Making his announcement in Cornwall, Boris Johnson said he hoped his fellow leaders at the G7 summit would "make similar pledges so that, together, we can vaccinate the world by the end of next year".

Which countries are donating vaccines and how many?
Covax works with with governments and vaccine manufacturers around the world. Supporters include the US, the UK, Canada, Japan, Australia, New Zealand, the UAE, France, Germany, Italy, Spain, Sweden, and Portugal.
Countries have pledged to donate both money and surplus doses from their own vaccine supplies.
WHO director-general Tedros Adhanom Ghebreyesus previously criticised wealthier nations for "gobbling up" the global vaccine supply.
G7 countries have purchased over a third of the world's vaccine supply, despite making up only 13% of the global population.

What vaccines does Covax use?
Six vaccines have been given "emergency use authorisation" by the WHO, meaning they can be shared via Covax: AstraZeneca, Pfizer, Janssen, Moderna, Sinopharm and Sinovac.
However, only Pfizer and AstraZeneca doses have been delivered so far.
Moderna has agreed to supply 500 million doses at its "lowest-tiered price", but most won't be available until 2022.
How has the Covax rollout gone?
Covax has been criticised for being slow. Some initial targets were missed, partly as a result of the poor health infrastructure in many of the recipient countries, and partly because of vaccine hesitancy.
Deliveries have also been delayed because of the deteriorating situation in India. Officials there restricted exports to protect their own population amid soaring infection rates.
The Serum Institute factory in India was a major supplier of the Oxford-AstraZeneca vaccine to Covax, and the scheme faces a shortfall as a result.
Can Covax help end the pandemic?
Globally, more than two billion doses of coronavirus vaccines have now been administered, in over 190 countries.
However, while some countries have fully vaccinated a large amount of their population, many others have only just begun, or in some cases are still waiting for their first doses to arrive.
Covax aims to close that gap. "With a fast-moving pandemic, no one is safe, unless everyone is safe," the WHO says on its website.
But even if Covax meets its goal to vaccinate 20% of the population in its 92 target countries, that's well short of the level of immunity that experts say is needed to end the pandemic.
The WHO has suggested that figure is at least 70%. People may also need booster doses to remain protected.
WHO Covid19 Pfizer AstraZeneca pandemic covid19 vaccine COVAX vaccination campaign G7