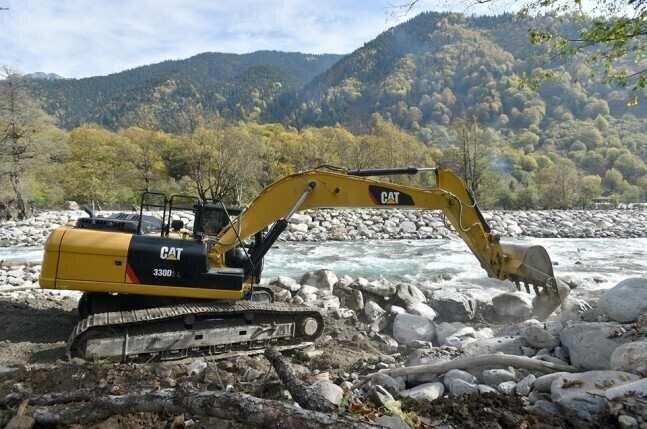 Residents of the Nakra valley have historically met the flood season completely unprotected. As a result of the disaster, houses, yards and agricultural lands in the villages were significantly damaged. This is the first spring this year, when the expected flood risk has been significantly reduced - last year, upon the request of locals, Nenskra Hydro cleaned the riverbed from debris at two sections of the Nakra River and carried out bank reinforcement works.

How much work has been done in the Nakra riverbed and how the population will be protected in the future? Rodam Gvarmiani, a member of the Mestia Municipality Council and a resident of Nakra, discusses these topics.

- How important was the implementation of this project for the population of the valley?

First of all, it should be said that this project is a great example of cooperation between the investor and the population. The works were carried out on the site upon the request of the population.
There has been a problem with flooding homes and lands in the valley for many years. Both banks of the river are significantly damaged by the floods. On the left bank, where there is a slope and erosion due to the floods, the population lives in danger. The walls of the houses were cracked, so the problem needed to be solved in time.

As for the right bank, which is also inhabited by locals, mainly agricultural areas are damaged. Arable lands have been completely destroyed, as well as homestead plots. Therefore, the bank reinforcement and riverbed cleaning works were vital for the residents of the community.

- When did Nenskra Hydro start bank reinforcement and riverbed cleaning works on the river Nakra?

The project was implemented with involvement of the Mestia Municipality, with the active work of the Nakra Community Advisory Committee and funding of JSC Nenskra Hydro.
Project works began in the fall of 2018. Initially, a geological survey of the valley was carried out, design was prepared, a tender was announced in the spring of 2019, and works were completed in the same year.

- How much work has been done on the river and how many sections have been reinforced?

Both projects are important for the population due to the severity of the problem. As a result of the floods, the settlements were in real danger, and today we can say that the population is safe.

- How many villages are there in Nakra Valley and were the locals employed in the project?

Nakra Community includes 11 villages with a population of 120 households, i.e. about 450 residents. Due to the specifics of the work, the main work was done by the machinery, however, up to 10 locals were employed in the project.

- Can we say that Nakra Valley will meet the flood season prepared thanks to this project?

Indeed, floods occur every year in Nakra Valley. During the disaster in Chuberi in recent years, despite the relatively small scale flood in Nakra, still, the population has suffered greatly. These events started 10-15 years ago and have been especially active in the last few years, which has become a significant problem. This project already provides life and safety for specific families. In fact, in areas where cleaning and bank reinforcement works have been carried out, residents are guaranteed to be protected from the threat of flooding.

It should also be noted that this is not the first project and similar works of Nenskra Hydro have been carried out on the Nakra and other torrent rivers in recent years.

- Apart from this project, how does Nenskra Hydro help the local population?

In addition to environmental projects, the company Nenskra Hydro in cooperation with Nakra Community Advisory Committee has implemented various social projects. These include providing the kindergarten and school with the necessary equipment, as well as rehabilitating the drinking water system and implementing new projects in all eleven villages of the Nakra community. Rehabilitation works of the central water supply system are still underway. As a part of the rural development program, the project was launched by the Mestia Municipality, and the following year, Nenskra Hydro began its funding. The second phase of the works, which aims to provide the population with drinking water, should be completed this year. Works were carried out in 7 villages last year. The rehabilitation of the major facility in the central part of Nakra will be completed this year.

In addition, the company helped the local population with heavy machinery in the scope of Access to Mechanization project. Each family had the opportunity to use Nenskra Hydro’s equipment free of charge for construction and agricultural purposes. Within the project, each beneficiary received the service worth up to 3,000 GEL from the company for free.