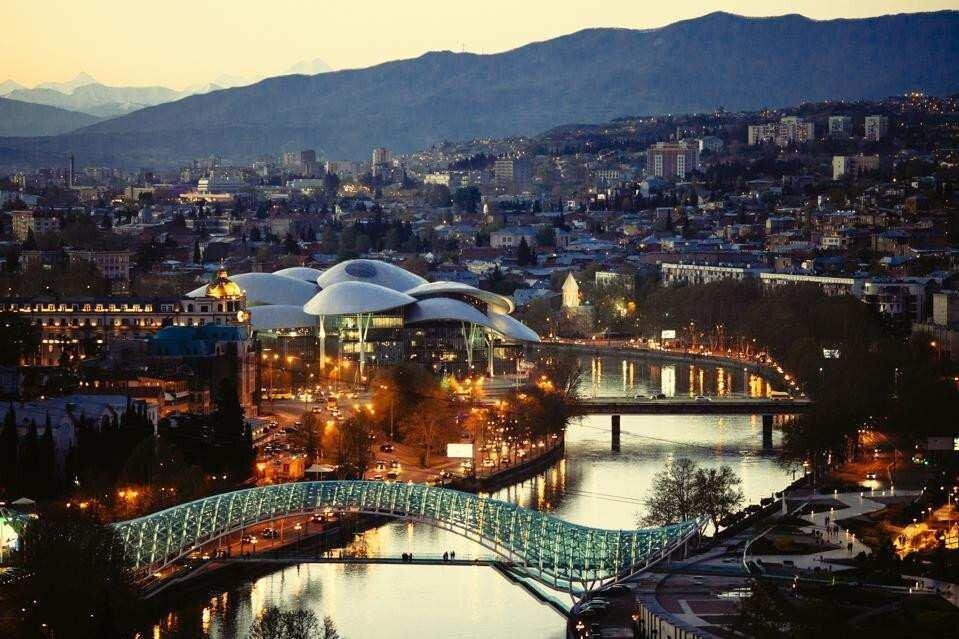 Not today, coronavirus, says the Republic of Georgia, - reports Forbes.

Located on the Black Sea and nestled between the Caucasus Mountains, Georgia was the recent host of the United Nations’ first in-person, Covid-compliant World Tourism Organization (UNWTO) conference on September 15 through 17. As the United Nations closed its first ever virtual General Assembly two weeks ago, the selection of Georgia for an in-person event is interesting for two reasons. Let’s get the first one out of the way.

First, this was the UN’s first large scale meeting abroad. Georgia has done a good job of managing its public health matters so far, taking swift action and providing clear guidance and testing. Like many countries, however, this small country of 3.7 million is experiencing a small uptick in the number of cases. But Georgia seems to have the situation under control. The overall numbers for Georgia were around 10,000 on October 7. Some 63 people have died so far.

Conducting its first annual conference outside Spain, the UN is sending a message that they’re not going to let the pandemic stop them from getting on with life.

The second reason is it showcases Georgia as a Western-oriented country, aspiring to join NATO and the EU, and looking for a free trade agreement with the U.S. Tbilisi and Washington get along.

Georgia is also part of the historic Silk Road linking East and West. For the tourism industry, Georgia brought in over million 9.4 million international visitors in 2019 alone.

UNTWO President Zurab Pololikashvili said at the Georgia event that he believed, “Safe and responsible international travel is now possible in many parts of the world. It is imperative that governments work closely with the private sector to get global tourism moving again.”

That said, we all know that world travel has plummeted due to concerns over the pandemic.

International tourist arrivals plunged 93% in June when compared to 2019, with the latest data from the World Tourism Organization, released in Tbilisi, showing the the pandemic’s severe impact on the sector.

According to the latest World Tourism Barometer from the UNWTO, international tourist arrivals dropped by 65% during the first half of 2020.

For Georgia, tourism accounts for around 8.1% % of national GDP. Batumi, a coastal city with palm trees, has been a foreign investment success story for the global travel and tourism industry. Sheraton and Hilton rooms go for over $300 a night there. These are big bucks for a small country which is another reason UNTWO came to a place like Georgia, to highlight tourism as a driver of global commerce.

The UNWTO’s 112th Executive Session is now over and so far, no word of sick diplomats and translators. It’s as good example as any of how business and a public health alert can co-exist with sensible care and policies.

Georgia is becoming a world-class vacation spot with mountains, Black Sea beaches, is well known for its cuisine by the global foodies out there, and has a millennia-long tradition of wine making.

Logistics development along the Black Sea ports are arguably the biggest investment story in Georgia, thinks Jarred Guthrie, managing partner at Commonwealth Frontier Advisors, a company with a growing investment portfolio in Georgia. “These ports enhance Georgia’s reach in the global economy and make it a gateway to eight landlocked countries in the middle of Eurasia,” he says. “They are a testament to Georgia’s growing economy and business climate.”

Georgia ranks seventh in the World Bank’s Ease of Doing Business Index, an index that matters to small developing countries like this because it is the fastest way to sell themselves in elevator pitches to corporate investors. Believe it or not, seven is one notch below the United States, at six.

They rank 12th on the Heritage Foundation’s Freedom Index. That’s surprisingly ahead of mostly all of Europe, ahead of the U.S. (17) and light years ahead of China (103).

Workers, including government employees, can form and join independent unions, to legally strike, and to bargain collectively. They country has ratified many International Labor Organization conventions on worker rights, unlike China.

Transparency International ranks it 44 out of 198 countries on their Corruption Perception Index. That ranks them better than the BRICS, better than Mexico, and on par with relatively drama free nations like the Czech Republic (44) and Latvia (44) .

Georgia has preferential trade deals with 32 countries, including the U.S., though it would like a free trade deal. Currently, Georgia can export many products duty-free to the United States under the Generalized System of Preferences program. U.S. maintains healthy positive trade balance with Georgia.

Georgia also has a so-called Deep and Comprehensive Trade Agreement with the EU and a free trade deal with China. So far, foreign investors have participated in most major privatizations of state-owned enterprises there. The U.S. Development Finance Corporation, which has a long history in Georgia, investing more than a half-billion dollars in various segments of the economy.

For China, Georgia is a route into Europe via the Black Sea. China already controls a number of ports in nearby Turkey but has not yet put money to work in any Georgian port projects.

In 2015, China Ocean Shipping Company (COSCO) and China Merchants Holdings pumped $1 billion into a Turkish port terminal (Kumport) on the European part of the Sea of Marmara, adding to a list of China’s some 42 overseas ports. They have the Mediterranean Sea surrounded, including controlling stakes in the port of Piraeus, Greece and large stakes in ports in Genoa and Marseilles.

“They have invested in port logistics not just in Europe, but everywhere,” says Nozar Hashemzadeh, an economics professor at Radford University in Virginia. “They will buy ports or invest in being part of the controlling interest of a port wherever they can,” he says.

The pandemic has put much of the big infrastructure deals on hold. Security of Black Sea projects is obvious. Some big projects have fallen through. Georgia’s Anaklia port project failed to secure the necessary volume of cargo near China’s One Belt One Road that would allow financing and is on hold.

The country has some critical infrastructure already and hopes to become a global data transit center for new routes connecting Europe with Asia and the Middle East.

In August 2019, Caucasus Online, one of the largest telecom players and owners of some 1,000 miles of underwater fiber optic cable connecting the region with the EU, sold a 49% equity stake to an Azerbaijani company, without the prior consent of the government. The deal then fell apart, as Georgia wants to take part in the implementation of the Digital Silk Road project connecting largest Eurasian markets via Georgia.

NEQSOL Holding purchased Georgia’s largest internet provider, Caucasus Online in 2019, as part of a plan to build a strategic broadband communications network connecting Europe to Asia. Later, the Government of Georgia became — according to NEQSOL — “determined to undermine the development of Caucasus Online” and breached its obligation to treat NEQSOL’s investment fairly and equitably, the company said. Calling it “a concerning move for investor climate in the country, the Government of Georgia expropriated Caucasus Online last week.

The country plans to use its strategic underwater fiberoptic lines to develop a corridor between Europe and the Middle East to position the South Caucasus as a secure and reliable data carrier.

Still, U.S. Ambassador Kelly Degnan says Georgia’s “free and fair” parliamentary elections at the end of October represent another “opportunity” for the country.

Their location, economic reforms and — based on World Bank and Heritage Foundation’s view — keep their investor-friendly climate intact. If so, Georgia will bring in the foreign investors it needs to grow, and not just into the tourism space as highlighted by the UNWTO.

“Georgia has done well with its economy,” says Janusz Bugajski, Senior Fellow at the Center for European Policy Analysis. “They're trying to be the Ireland of the Caucasus.”