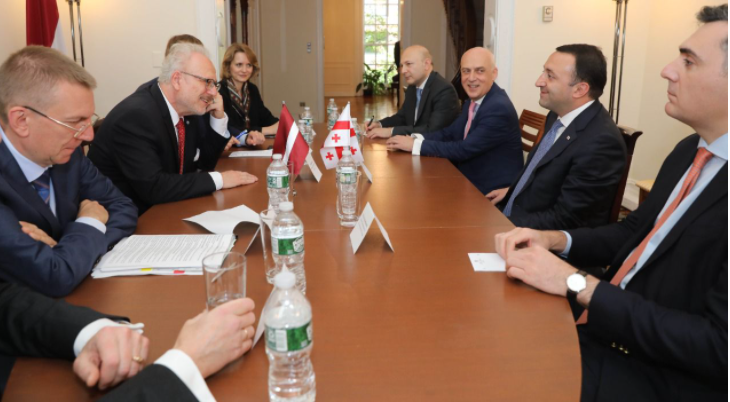 Bilateral readiness was confirmed at the meeting held in New York City within the scope of the General Assembly of the United Nations, towards making the high-level political dialogue continued and further deepened between the two countries.

Significance of a consolidated support was noted from Latvia and efforts of international partners in having the progress achieved by Georgia duly acknowledged at the upcoming Summits of the Eastern Partnership (EaP) and North Atlantic Treaty Organization (NATO).

The Head of Government of Georgia expressed his gratitude to the President of Latvia for a decision to donate COVID vaccines and highlighted the importance of solidarity from the international community in achieving common goals, inter alia manifested in ending the pandemic.

Discussions were also related to cooperation - in both bilateral and multilateral formats. Irakli Garibashvili noted that the Government of Georgia appreciates the support demonstrated by Latvia towards successful implementation of current reforms in Georgia. Development cooperation was mentioned within this context, as it will lead to the approximation of Georgia institutions with European standards and practices.

Readiness was expressed from both sides to deepen the economic cooperation, which will lead to overcoming the post-pandemic challenges and achievement of ultimate economic growth. Rising trend of trade volumes between the two countries was deemed positive, thereby noting the importance of holding the next meeting of the Intergovernmental Economic Commission in the short period of time. Dignitaries welcomed the resumption of direct flights between the two countries, as it is a good basis for a further development of cooperation in the field of tourism.

The President of Latvia reaffirmed the Prime Minister of Georgia at the meeting in his support towards territorial integrity and sovereignty of Georgia, along with its European and Euro-Atlantic integration.