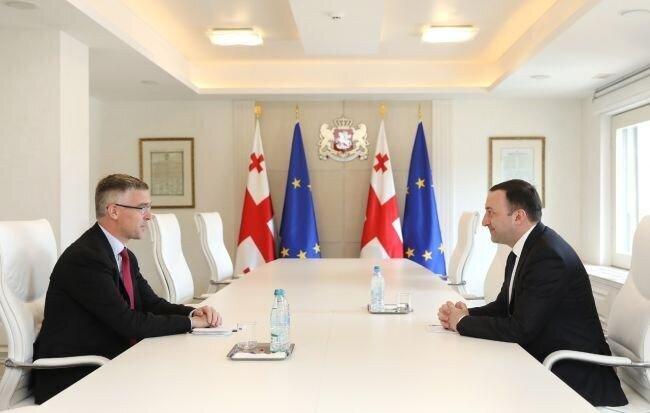 EU Membership Application filed by Georgia and relations between Sweden and Georgia were among the key issues discussed by Irakli Garibashvili, Prime Minister of Georgia and H.E. Ulrik Tideström, Ambassador Extraordinary and Plenipotentiary of Sweden to Georgia yesterday

The Head of Government of Georgia noted that the first part of the EU Accession Questionnaire has been handed over to the EU Delegation Head for the European Commission, while the second part will be submitted to the EU shortly.

According to the Prime Minister of Georgia, the EU Accession Questionnaire handed over to Georgia by the European Commission launches a completely new stage in the EU-Georgia relations, which assigns a tremendous responsibility to the country towards bolstering its efforts for EU membership. Georgia remains optimistic of solid support of international partners within this process.

Dignitaries discussed the prospects of greater advancement of the already successful cooperation between Georgia and Sweden. Irakli Garibashvili thanked the visiting diplomat for the support of sovereignty, territorial integrity of Georgia, as well as EU integration process and European reform agenda. It was noted that Sweden is one of the largest international donors of Georgia and has made a huge contribution in the democratic and institutional building, modernization and socio-economic advancement of the country.

Meeting also focused on the current political relations between Georgia and Sweden. It was noted that interaction between the nations is advancing in a dynamic manner in the political dimension, which is evidenced by the high-level visits and frequency of meetings.

Dignitaries also spoke about the current military activities witnessed in Ukraine. Irakli Garibashvili reassured the visiting diplomat in the political support and solidarity of Georgia to Ukraine.