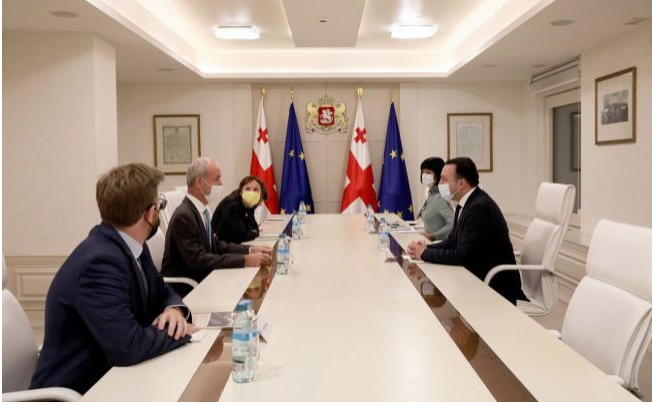 The Head of Government thanked the International Committee of the Red Cross for its important work in Georgia, namely in the occupied territories: Abkhazia and Tskhinvali Region.

Irakli Garibashvili pointed out that the Georgian Government appreciates the support of the International Committee of the Red Cross provided to the conflict-affected populations, meaning humanitarian aid for those living in Abkhazia and Tskhinvali Region, and along the occupation line.

The meeting singled out the work carried out by the International Committee of the Red Cross toward locating missing persons and returning them to their families. The Prime Minister underlined the crucial mediatory and supportive role of the ICRC in the implementation of this program, also reaffirming commitment to continuing this line of cooperation with the committee.

The meeting at the Government Administration was attended by ICRC Regional Director for Europe and Central Asia Martin Schuepp, Head of the ICRC Delegation in Georgia Severine Chappaz, and ICRC Envoy on Missing Persons in the Caucasus Daniel Mac Sweeney, with State Minister for Reconciliation and Civic Equality Tea Akhvlediani representing the Georgian side.