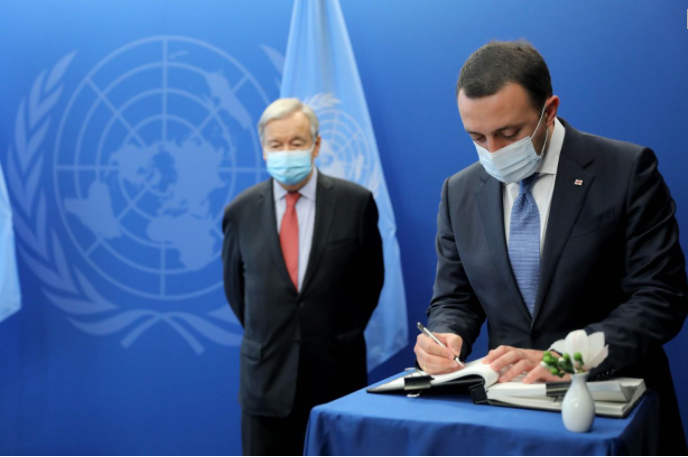 The Head of Government of Georgia congratulated him on the re-election for the second term and expressed gratitude for the support demonstrated to Georgia in the fight against the novel coronavirus.

The Prime Minister of Georgia particularly stressed the personal support of the Secretary-General and UN as a whole towards the territorial integrity and sovereignty of Georgia, thereby noting that the Government of Georgia appreciates the engagement of the UN in the peaceful resolution of the conflict.

In the opinion of the Head of Government of Georgia, report of the UN Secretary-General on the internally displaced persons (IDP) from Abkhazia and Tskhinvali regions of Georgia, along with resolutions of the General Assembly of UN (UNGA) and Human Rights Council (UNHRC) are the most important mechanisms for maintaining the grave humanitarian condition witnessed in the occupied territories of Georgia at the high level of the international agenda.

Attention was paid to the grave condition in terms of security and humanitarian aid in the occupied territories of Georgia. Role of the UN was highlighted within the scope of Geneva International Discussions (GID), thereby noting that it is essential to attain concrete, tangible outcomes from within this format.

The Head of Government of Georgia also spoke about the importance of engagement and decisive steps of the UN towards the prevention of incidents occurring in Gali and recovery of response mechanisms.

According to Irakli Garibashvili, the Government of Georgia remains committed to the peaceful resolution of the conflict, which aims to have the Georgian territories de-occupied and trust restored among the communities divided by the occupation line.

Meeting between the Prime Minister of Georgia and the UN Secretary-General was held at the UN Headquarters in New York within the scope of the UN General Assembly (UNGA).