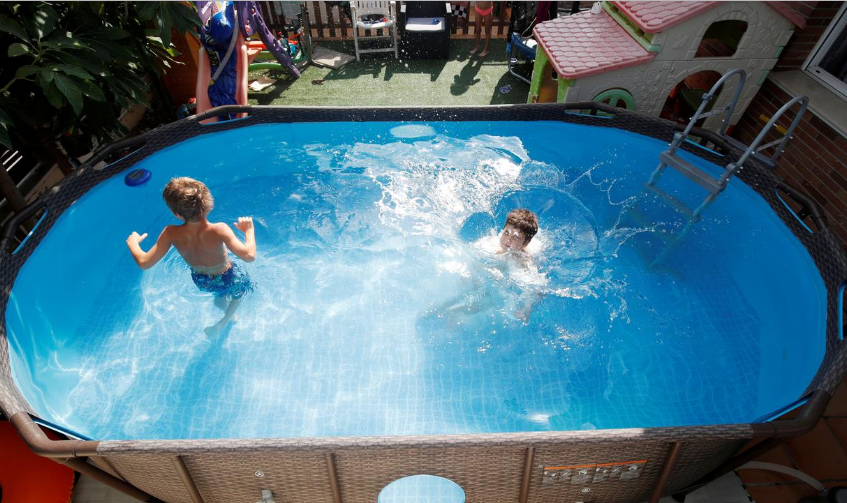 Locked down, hot and desperate for a dip? If you live in Indianapolis and fancy putting a pool in your back yard there’s a three-week wait - but that’s just for an appointment to order one for next year.

Across the United States and Europe, manufacturers and distributors of swimming pools and hot tubs are scrambling to meet a wave of demand as consumers cocoon at home to escape the coronavirus pandemic.

Frustrated by the long lead times and worried about a second wave of infections, some U.S. consumers have even resorted to fashioning home-made pools out of metal livestock tanks despite the health and safety concerns.

“I’ve been in this industry for 35 years and I’ve never seen anything like this,” said Thomas Epple, chief executive of Only Alpha Pool Products in Fort Wayne, Indiana.

Epple said orders for its steel and composite pool walls surged 200% in 60 days after a lacklustre March and April and he has now doubled output by taking on more workers, adding shifts and paying lots of overtime.

“The shortage of materials in the industry is great - pumps, heaters, above-ground pools have been sold out for some time.”

The swimming pool boom illustrates how the health crisis has altered consumer habits in favour of stay-at-home businesses as the world struggles to contain new outbreaks and some people avoid beaches, pools and lakes to vacation at home.

In Indianapolis, Tyler Hermon, sales director at Pools of Fun, said his phone hasn’t stopped ringing after an initial lull and sales are now up 43% from a year ago.

“I 100 percent attribute this to people quarantined at home,” he said, adding that customers faced a three-week wait for an appointment just to talk about installations for 2021.

“The race is now on to get on the schedule for next year because everyone’s anticipating there will be another round, another wave.”

It’s a similar story in Spain, a country known for its sizzling summer temperatures which imposed one of Europe’s toughest lockdowns to curb the spread of COVID-19.

Spain’s Fluidra, the world’s largest swimming pool equipment maker, initially furloughed employees in anticipation of a slump in demand but it soon put them all back to work, and hired more people.

In May, Fluidra ran out of stock and production capacity for the year for its above-ground pools, despite the extra staff. Sales of those models, which cost about 1,300 euros ($1,531), jumped over 50% in early July from the same period of 2019.

But sales at its community pools division, which supplies pools and equipment for clients such as hotels, dropped 11.7% in the first half of the year due to the impact of lockdowns.

“People want more property, larger houses because they are working from home, and want their environment to be an oasis in case they are confined again,” said Fluidra chief executive Bruce Brooks.

“I think that will continue until there’s a vaccine and a return to normal,” he said, adding that the pool industry trend was being replicated across the Western world as the “cocooning effect” offset the economic downturn.

Sales of easy-to-build pools by the home equipment distributor Leroy Merlin in Spain soared more than 200% in the first six months of 2020 from a year earlier and stores are now out of stock, said head of products Ines Egea.

Laila Dagali, 36, splashed out on an inflatable pool for the terrace of her house near Barcelona in May as she shunned the beach and a neighbourhood pool because of “the fear of being with unknown people” during the pandemic.

In Germany, demand for home pools has been on the rise for a few years but has “significantly intensified” with the pandemic, said a spokeswoman for manufacturer Hornbach Holding.

The big question for pool manufacturers now is how long the trend will last.

Carles Torrecilla, marketing professor at Esade business school in Barcelona, said it was too early to tell because new consumer habits can take years to consolidate.

“Only if the coronavirus lasts 10 years, behaviour and habits will change.”