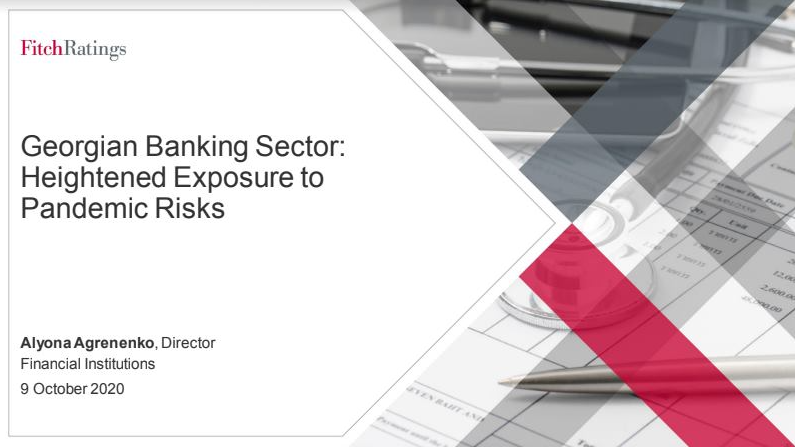 The financial metrics of the Georgian banking sector are sensitive to the severity of the health crisis and the performance of loans most vulnerable to the downturn, Fitch Ratings said at its recent webinar on Georgia.

According to the influential Ratings Company, in 1Q20, in line with the National Bank of Georgia's (NBG) instructions, banks pre-emptively created GEL1.1 billion of loan loss allowances (equal to about 3% of sector loans at end-1Q20) against potential pandemic-driven future deterioration in asset quality. Coupled with weaker revenues, this resulted in a GEL0.5 billion sector loss in 1H20, corresponding to an annualised return on equity of minus 18%.

At end-1H20, sector non-performing loans, as defined by the NBG, stood at 5.5% of the sector portfolio, with loan loss allowances equal to 1.3x non-performing loans. Sizeable one-off reserves resulted in weaker capital metrics; the sector Tier 1 capital adequacy ratio declined to 12.8% at end-1H20 from 14.6% at end-2019, but owing to relaxed regulatory requirements, headroom above the reduced minimum levels remained comfortable – Fitch reports.

“We believe that the pre-impairment profitability of banks will likely improve in 2H20 and 2021, as fee incomes have already started to recover amid improving economic activity, and margins will likely be supported by lower funding costs and more active lending, in particular to higher-yielding segments, such as micro and SMEs” – Fitch Ratings states in an presentation published on Georgian Banking Sector.

According to Fitch, at the beginning of the health crisis Georgian banks offered grace periods and loan restructurings to borrowers from troubled sectors of the economy, as well as three-month payment holidays to all individuals.

“These measures, together with direct support from the state – Fitch believes - helped to ease pressure on borrowers' debt repayment capacity. We believe the performance of these loans will be key to banks' future solvency. This is because, in the event of material further asset quality deterioration, banks might need to create additional sizeable loan loss allowances, which could pressure capitalization and result in a marked weakening in banks' credit profiles”.