Protest Stops Today Before the CEC, Resumes Tomorrow at the Parliament 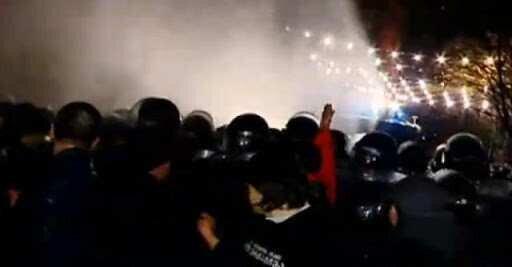 Back
Opposition leaders have addressed their supporters to stop protesting before the CEC today and gather again near the Parliament of Georgia tomorrow at 18:00 pm. to continue with the demands such as the resignation of the CEC chair and scheduling the new elections.
The decision came after the police used water cannons the second time to dismantle the protesters despite the number of negative assessments from the election watchdogs and the ombudsman of Georgia on the used disproportional measures.
Thousands of protesters led by major opposition parties have rallied at the Central Election Commission, demanding the resignation of the CEC chair and scheduling new elections. The protest started at 15:00 pm. near the Parliament of Georgia where the opposition aired its ultimatum for the CEC chair to resign and the date for the new elections to be set. After the ruling party – Georgian Dream did not meet the ultimatum, the opposition decided to move to the CEC premises.
TV live videos showed how water cannons were used by the police on a number of protesters outside the Central Election Commission building, before the larger crowds led by the opposition leaders had joined in CEC headquarters. Later the Ministry of Internal Affairs (MIA) released an official statement where it said that protesters tried to overtake the CEC building, “as seen in the footages and which has been averted by the police.” The key matter with these elections is the ability of the Georgian Dream to form the government unanimously.
ISFED - an election watchdog had said earlier that the violations in counting ballots could affect the election outcome by 4.1%.
Elections2020 CEC