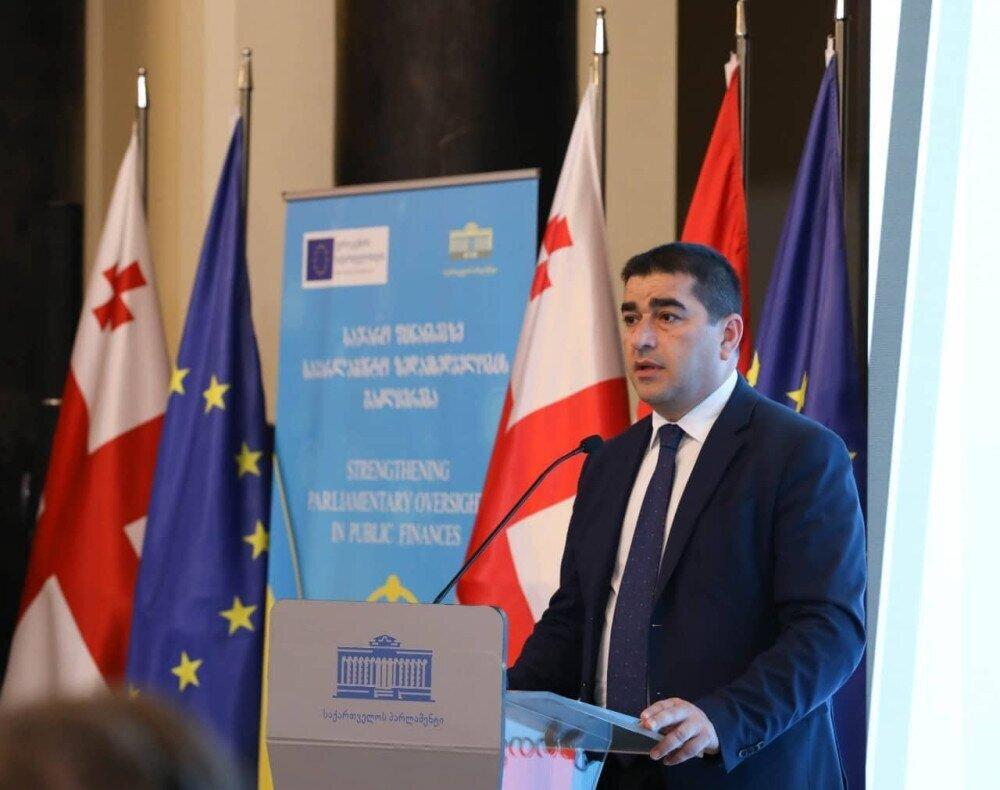 "It should be noted that legislative oversight of public finances is an area in which Georgia is quite strong, to the pride of our Parliament. According to data from Open Budget 2021, the audit and parliamentary oversight systems are rated as satisfactory with 74 out of 100 points, and Georgia is first out of 120 nations in terms of budget openness. Therefore, we may conclude that this interim phase is excellent and that it is crucial that we continue to do better in this area. We shall have more to say regarding parliamentary oversight of public finances when this convocation Parliament winds up its proceedings", - the Speaker, Shalva Papuashvili stated at the presentation of the EU Twinning Project “Strengthening Parliamentary Oversight in Public Finances”.

According to Shalva Papuashvili, important steps have been taken in terms of oversight of the management of public finances.

According to him, it is important that the Parliament, and the Budget and Finance Committee actively participate in the process by using various oversight tools and sharing the best experience, and this is an opportunity to further improve the existing data.

"In terms of oversight of the administration of public funds, we have systemized a lot of processes. Every MP needs to be concerned about these topics, especially those on the opposition side, in my opinion. Here, the backing of the Institute of Finance and Economics and the House of Representatives of the Kingdom of the Netherlands is particularly significant. We will be able to further improve our data as a result. The members of our Committee are fairly competent, and they provide the Parliament with excellent service. However, it is also crucial to involve all MPs in this process", - Shalva Papuashvili remarked.

The Speaker thanked the European Union and the Kingdom of the Netherlands for the many years of assistance provided in terms of parliamentary democracy and oversight.

"I want to express my gratitude to the European Union for their many years of support for Georgia. The Parliament is working on increasing the tools of parliamentary supervision, not just in this specific area but also generally, and I believe that in this case, too, support from the EU is essential. Additionally, I would want to express my gratitude to the Kingdom of the Netherlands in particular because such twinning projects allow for the exchange of experience between the nations, and the Netherlands' experience is valuable to us", - Shalva Papuashvili noted.

The speakers talked about the role and importance of the budget office of the Parliament in the EU countries and Georgia and focused on the importance of parliamentary oversight of public finances. '

The EU Twinning Project “Strengthening Parliamentary Oversight in Public Finances” is implemented with the financing of the European Union and the cooperation of the Budget and Finance Committee of the Kingdom of the Netherlands and the Parliament of Georgia.