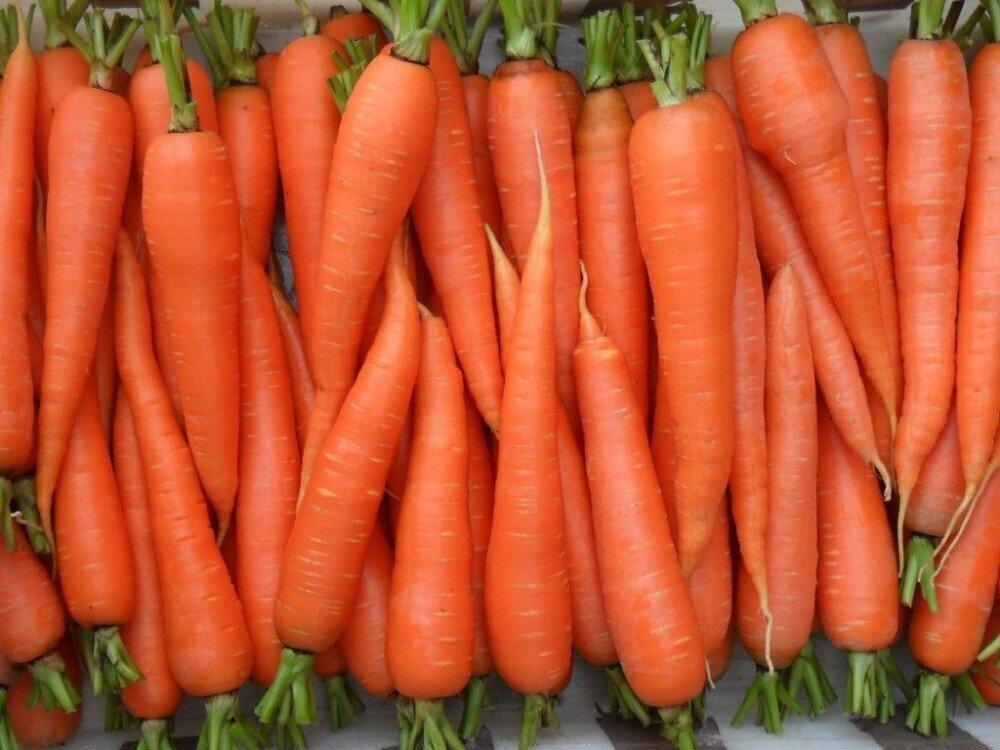 Back
Over the past two months, the average wholesale prices for carrots in Uzbekistan have decreased by 38%, i.e. from 8,000 UZS/kg ($0.75) on August 12 to 5,000 UZS/kg ($0.47) on October 14, 2021, according to EastFruit price monitoring data. Nevertheless, the current price levels are almost 2.5 times higher than on the same date in 2020, and 3.5 times higher than on the same date in 2019, EastFruit experts note. Meanwhile, the harvesting of late-ripening carrots, which are usually harvested in Uzbekistan from September to the end of October, is to finish in about two weeks.
The record high prices for carrots in Uzbekistan in May and June 2021 were due to their rush demand in foreign markets, but this influence reduced in the second half of July, since the craze had already died down by that time. EastFruit analysts noted on July 16, 2021 that the further dynamics of carrot prices in Uzbekistan will depend on the ratio of supply and demand in the domestic market, but wholesale prices remained high and several times exceeded the levels of previous years. 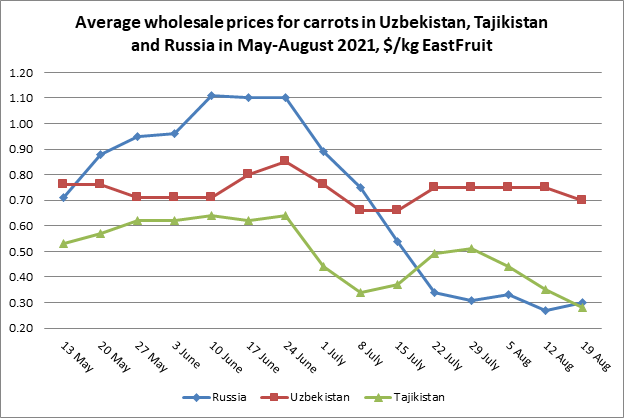 To understand the pricing of carrots in Uzbekistan, it is worth recalling that due to climatic conditions, carrots are sown and harvested in Uzbekistan four times a year:

As for the influence of foreign markets and an increase in the export of carrots, according to the Customs Committee of the republic, the volume of carrot exports from Uzbekistan in 9 months of 2021 amounted to 48.1 thousand tons, which is 6.8 thousand tons or 16 % more than in the same period in 2020. It is unlikely that the only factor in increasing exports by 16% can explain the average wholesale prices this year being 2.5 times higher than last year.
Accordingly, the reasons for the rise in prices lie either in the growth in demand for carrots in Uzbekistan, which is very unlikely, or in a decrease in the volume of its production. Unfortunately, there are no reliable official estimates of the volume of carrot production in Uzbekistan in 2021. However, production could indeed have decreased, as frosts in early spring could have affected the harvest of early carrots, and dry and hot summer, several degrees hotter than the average, could not but reduce the yield of mid- and late-ripening carrots.

Thus, such a sharp rise in carrot prices in Uzbekistan is most likely a combination of two factors: an increase in exports in the first half of the year and a decrease in carrot yields.
Therefore, wholesale prices for carrots in Uzbekistan are now 42% higher than in Russia. Accordingly, there is no exporting carrots to Russia.

By the way, Uzbekistan is the champion in the level of carrot prices among all nine countries of the region now, which means that it is time to consider imports. Notably, Uzbekistan has never imported carrots. Operational trade statistics show that the first imported carrots have already became available on the Uzbek market in the second half of 2021.

With today’s high prices for Uzbek carrots, imports look very attractive and economically feasible. For example, Uzbek entrepreneurs could make good money on the import of carrots from neighboring Tajikistan right now, where the wholesale price is three times lower. This would also relieve tension from the domestic carrot market, and exports can be resumed by the beginning of the spring harvest, since carrot prices are already high now in many countries of the region.
Uzbekistan Export Trade Import Carrots high prices