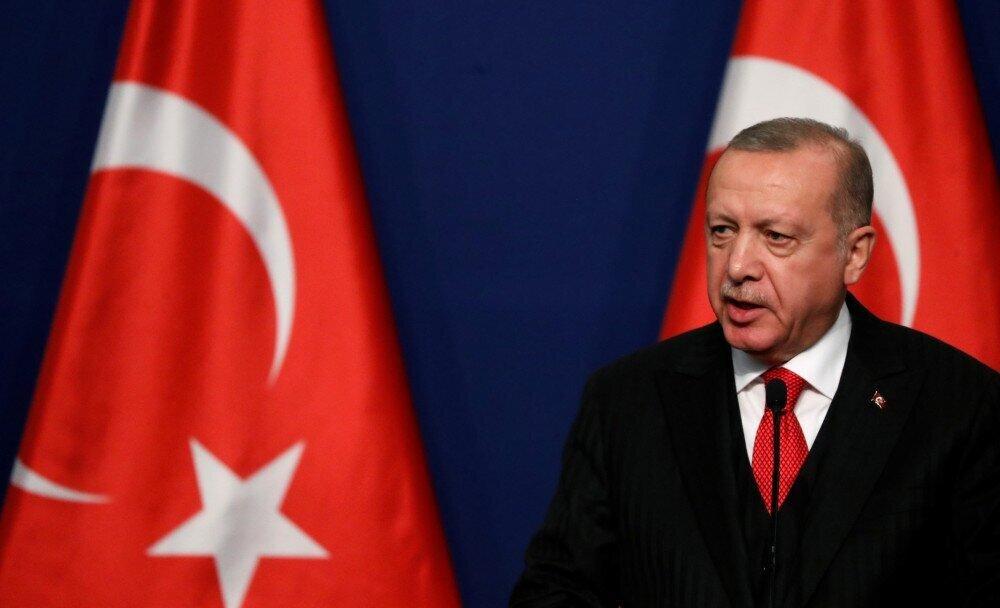 Underlining that Russia invading Ukraine is not a realistic scenario, President of Turkiye Recep Tayyip Erdoğan warned Tuesday that the region could not accept another war.

Speaking to members of the Turkish press on the way back from Albania, Erdoğan touched upon the ongoing crisis between Russia and Ukraine in the Donbass region, Daily Sabah reports.

"I do not see Russia's invasion of Ukraine as a realistic approach. Because Ukraine is not an ordinary country. Ukraine is a powerful country. In addition, in order for Russia to take this step, it needs to review the situation in the whole world and its own situation," he said.

Stressing that war needs to be erased from the history of politics, Erdoğan said: "These things will not work using the reasoning: 'I'll occupy the lands of a place, I'll take them.'"

As one of the few NATO members with good political, economic and military relations with Russia, Turkey has been maintaining its neutrality and following a pragmatic approach since the escalation of tensions last year. It also maintains its support for Ukraine's territorial integrity and opposes the illegal annexation of Crimea.

President Erdoğan in October offered for Turkey to play a mediator role in the crisis, and later added that with the consent of both parties, Turkey could mediate, facilitate and offer support in any way needed. Foreign Minister Mevlüt Çavuşoğlu also said that Turkey has been in contact with both Russia and Ukraine, noting that Ankara advised both sides to remain calm and de-escalate the situation.

In an initial response, Kremlin spokesperson Dmitry Peskov dismissed Ankara's offer while speaking to journalists in Moscow, saying: “The fact is Russia is not a party to the conflict in Donbass. It will be impossible to find solutions to the problem at such a summit.” On the other hand, Ukraine welcomed Ankara's statements, with Ukrainian Foreign Minister Dmytro Kuleba telling a news briefing: "We will welcome any efforts that can help us to put an end to this war, to return Ukraine's territories that are currently under Russian control."

Kyiv has been battling a pro-Moscow insurgency in two eastern regions bordering Russia since 2014, shortly after the Kremlin annexed Ukraine's Crimean Peninsula. The United States and its allies have for weeks warned that Russia may be planning an invasion of Ukraine. Russia denies planning to invade the country, but satellite pictures showing as many as 100,000 troops gathered on the border have set Western nations on edge.

Ukraine, which wants to join the NATO military alliance, has blamed Moscow for supporting separatists in the conflict in its east since 2014. Russia sees itself as threatened by a NATO advance and wants to prevent the neighboring former Soviet republics Ukraine and Georgia from joining the alliance. Fighting between Ukrainian government forces and pro-Russian separatists in Donbass has killed more than 13,000 people since 2014, according to the United Nations. The region is one of the several sources of friction between Russia and Ukraine.

"Here, for example, what did Russia do in Ukraine? It crashed into Crimea. Regarding Crimea, I always tell Mr. Putin that we are against the invasion of Crimea in every meeting we have. Our Foreign Ministry relays this to its interlocutors in the same way. So our policy is clear in this regard," he underlined.

Military tensions between Ukraine and Russia have been high since the annexation of the Crimean Peninsula by Russia in 2014. Turkey, along with the rest of NATO, criticized Moscow's 2014 annexation of Crimea and voiced support for Ukraine's territorial integrity as Kyiv's forces battle pro-Russian separatists in eastern Ukraine.

Crimean Tatars are a Muslim community indigenous to the Black Sea peninsula and most opposed Moscow's annexation of the Crimean Peninsula. Russian authorities have since cracked down on the community, banning their assembly and television channel as well as detaining and jailing dozens of activists.