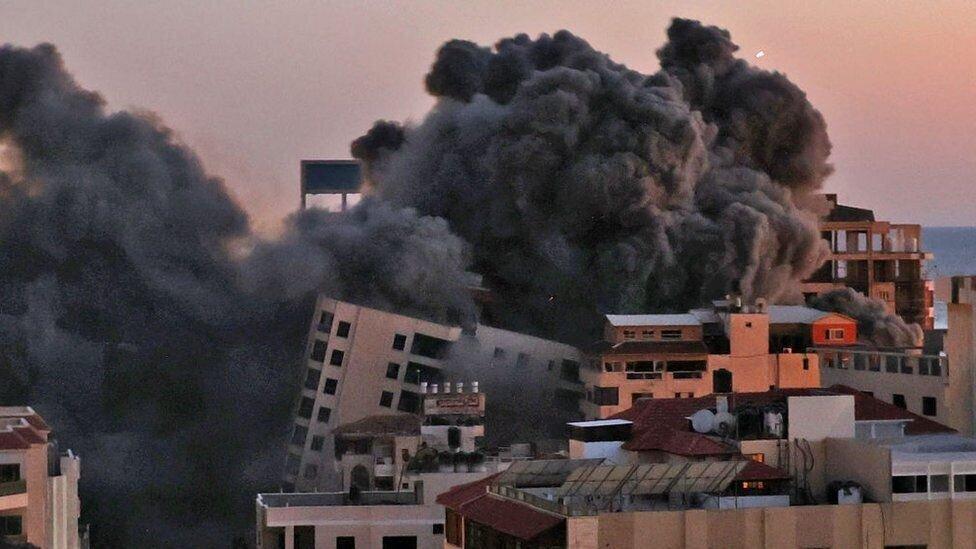 Back
Palestinian militants say they fired 130 missiles at the Israeli city of Tel Aviv after an Israeli airstrike felled a tower block in the Gaza Strip.

The 13-story building was attacked an hour and a half after residents and local people were warned to evacuate Reuters news agency reports.
Israel's military says it is targeting militants in Gaza in response to earlier rocket attacks.
At least 30 people have died in some of the worst violence in years.
The international community has urged both sides to end the escalation, which follows days of unrest in Jerusalem.
Militants had already fired more than 400 rockets since Monday night, killing two Israelis. Health officials in Gaza report that 28 Palestinians there were killed by Israeli airstrikes.
Israeli Prime Minister Benjamin Netanyahu said earlier that the main militant group, Hamas, had "crossed a red line" by firing rockets towards Jerusalem for the first time in years.
He warned that the strength and frequency of Israel's airstrikes would increase and Hamas would be "hit in ways that it does not expect".
Israel says it hit at least 150 targets in Gaza in response to the earlier rocket attacks.
Hamas, which controls Gaza, says it has been acting to defend Jerusalem's al-Aqsa mosque from Israeli "aggression and terrorism" after the site, which is holy to Muslims and Jews, saw clashes between Israeli police and Palestinians on Monday that left hundreds injured.

The past few days have seen the worst violence in Jerusalem since 2017. It followed mounting Palestinian anger over the threatened eviction of families from their homes in occupied East Jerusalem by Jewish settlers. Tension had already been stoked by a month of altercations between protesters and police in the predominantly Arab part of the city.
Israel Palestine Tel Aviv Gaza Strip

GEL Depreciated Against USD and Strengthened Against EUR

What Percentage of Pregnant Women in Georgia Are Fully Vaccinated?

There Is No Evidence That Vaccination Affects Fertility – NCDC