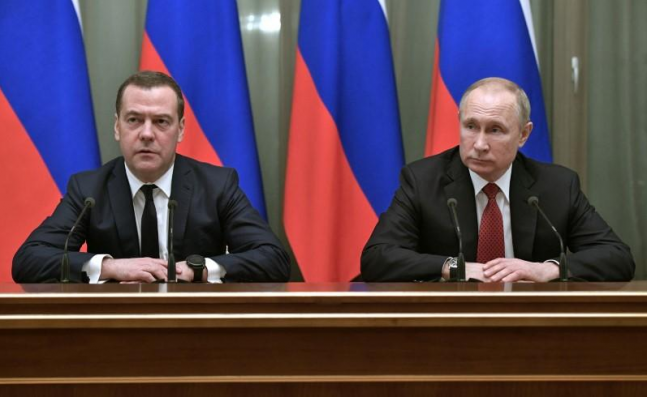 Without giving much detail, the news agency said President Vladimir Putin thanked Medvedev’s government for its work. The move was reportedly made so Putin can carry out sweeping constitutional changes he spoke about at his annual address just hours earlier.

“For my part, I also want to thank you for everything that was done at this stage of our joint work, I want to express satisfaction with the results that have been achieved,” Putin told a meeting of ministers, according to Tass.

News of the governmnet resignation came after Putin’s annual address to lawmakers. The Russian leader proposed a national vote on constitutional changes that would push power toward the prime minister and the parliament, and away from the presidency. It’s seen as potentially limiting the power of Putin’s successor if he steps down in 2024.

“After those amendments are adopted ... there will be significant changes not only to a variety of constitution articles, but to the balance of power, namely to the executive, legislative and judicial branches of power,” Medvedev said, according to Tass.

The government in Russia consists of the prime minister, deputy prime ministers and federal ministers and their ministries and corresponds to the Western Cabinet-style structure. However, Moscow’s political system is widely seen as being an autocracy with Putin possessing much of the power.

Putin, 67, has led Russia for two decades as either prime minister or president, shifting between the roles in the current Russian constitution that prevents someone from serving more than two consecutive terms as president. But the latest move could be a way for him to circumvent or scrap that rule entirely as his fourth term in office is due to end in 2024.