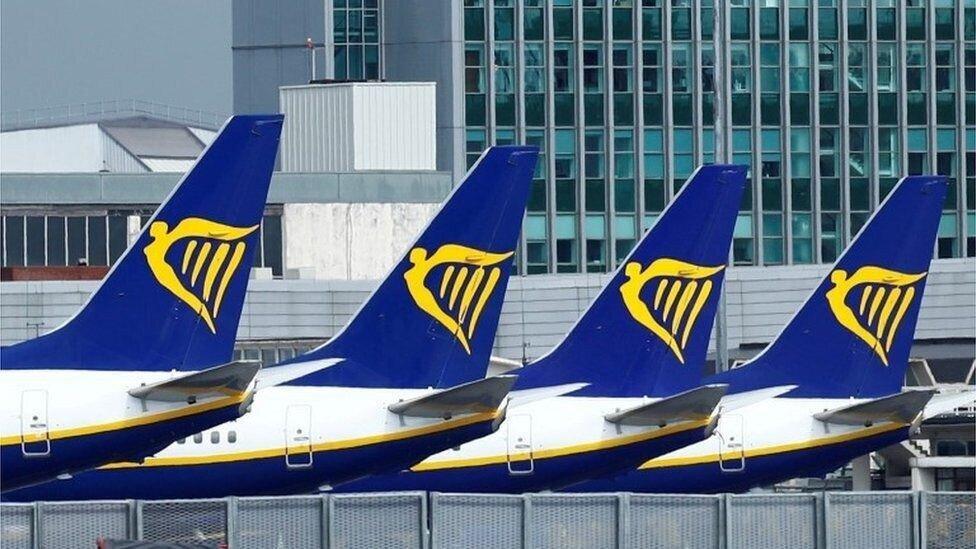 Back
Ryanair is expecting a "very strong recovery" in European short-haul flights, according to its chief executive, Michael O'Leary.
The airline, which forecast its capacity should return to pre-pandemic levels, has also launched 14 new routes from London airports.
Gatwick will open a new flight to Spain, and Luton will now have flights to Gran Canaria, Naples and Grenoble.

Stansted will also offer new services, including to Helsinki and Stockholm.
The Dublin-based carrier predicts it will fly a total of 10.5 million passengers a month over the next three months.
By passenger count, the airline is Europe's largest.
"Through the winter, pricing will continue to build, but it will still be below pre-Covid," Mr O'Leary said.
"We don't expect pricing to go back to pre-Covid levels until the summer of 2022," he added.
The airline is also looking to expand its order for Boeing aircraft and said it was hoping to buy up to 55 new planes.
"We're certainly very keen to place a Max-10 order, but only when the timing and the pricing is right," Mr O'Leary said.
He went on to criticise the UK government's current travel restrictions.
"If you just remove these stupid traffic light systems that don't work and confuse people, then I think people are very willing to go back to flying," he said.

The reopening of travel in Europe and the easing of restrictions for fully vaccinated UK travellers has led to a significant increase in demand.

As a result, EasyJet too has announced that it is extending its flying schedules.
Doug Parker, chief executive of American Airlines, also recently told analysts: "We are in the midst of an unprecedented recovery."
British Airways, owned by London-listed IAG, said it is working on plans for a short-haul presence at Gatwick Airport.
But the airline also warned it was facing a "serious" problem over wage costs which would "steeply increase" when the furlough scheme ends in September.
The government has said the aviation sector will have benefited from £7bn in government support by the end of September since the pandemic began.
Tourism Ryanair travel airline