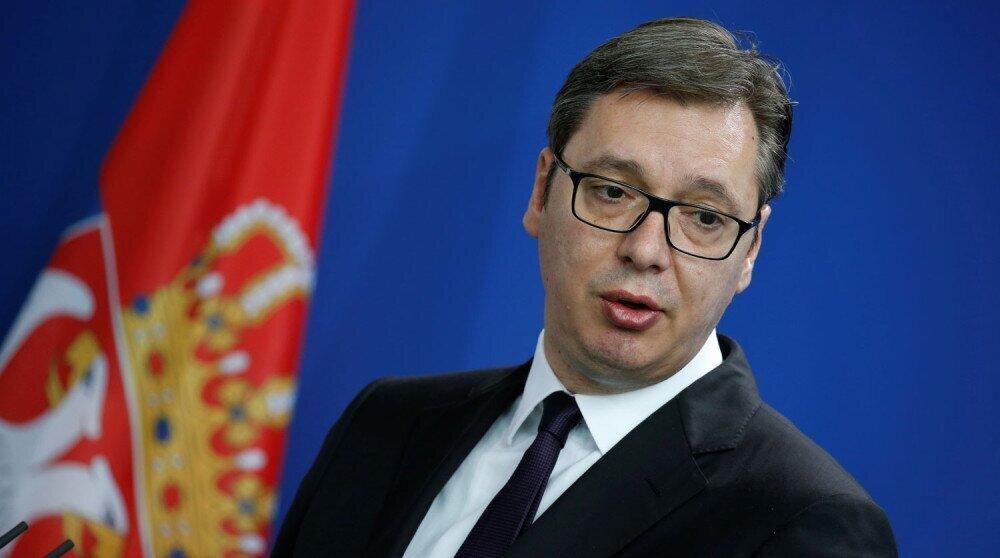 The news came at an awkward time, and in doing so, Vucic created a fresh headache for the Western anti-Putin alliance and, notably, for the European Union.

On the other side of the continent, EU heads of state were mired in in grueling negotiations over a sixth package of sanctions against Moscow. The final deal, announced late Monday, includes a partial ban on Russian oil imports to the bloc.

But Brussels was forced to make an exemption for oil that is imported to Hungary, Slovakia and the Czech Republic via a pipeline, in order to get everyone on board. This was seen by some EU members as a major concession.

While Serbia is not an EU member state, it is part of an EU enlargement plan that also includes some of its neighbors. The EU is set on expanding to the east and sees the Western Balkans as key to European security -- even more so in light of Russia's invasion of Ukraine.

Of these Balkan states, Serbia in particular is seen as crucial for numerous reasons.

Its size, population and geographical location all make it a major stakeholder in the geopolitics of the region. If you want to have a conversation about the future of Bosnia or Kosovo, you are going to need the Serbian government in the room.

However, Serbia is also very reliant on Russia when it comes to gas. It is also militarily cooperative with Moscow. In short, Serbia benefits enormously from its relationship with Russia, and even if it obtains EU membership down the road, it will not want to burn its bridges with the Kremlin.

This creates two simultaneous realities for the EU that, when placed next to one another, are rather difficult to reconcile.

Serbia is so big and important that it is crucial to the EU's enlargement project, which seeks to strengthen and expand European values, stability and security.

It is also so big and important that it can do deals with Russia, China and the EU all at the same time -- however it sees fit -- and still be the apple of Brussels' eye.

While Serbia has backed several UN resolutions condemning Russia's invasion, it has not sanctioned Moscow or aligned itself with Brussels on sanctions against Moscow -- something candidate states are expected to do. The new Russian gas deal, some EU officials and analysts fear, may be a step too far for some EU member states.

"If concluded, the deal would dash hopes of those who saw an opportunity to reduce the Russian influence in the region," said Filip Ejdus, associate professor of international security at the University of Belgrade.

Ejdus believes Vucic might be seeking to have his cake and eat it. He predicts the Serbian president "will certainly make reassurances that Serbia remains on the EU path, while maybe still expecting a better counter-offer by German chancellor Olaf Scholz."

However, Ejdus warned that "the gamble might backfire this time," as the EU has other policy priorities at the moment; he says trust between the two parties may be permanently damaged.

Whether that means that accession talks stall, or that the EU takes a different approach, remains to be seen. However, there is no denying that the gas deal has been a particularly bitter pill for officials and diplomats in Brussels to swallow.

"We are worried," one senior EU official told CNN. "Alignment from countries outside the EU is more important than ever, for countries inside the EU that are trying to hold the line," they said, referring specifically to Hungary, the EU member state most opposed to a hard stance on Russia.

Steven Blockmans, director of research at the Centre for European Policy Studies, told CNN that ever since the start of the war, "the EU has been pressuring third countries, including China, to have a similar approach to sanctions. If even states currently trying to join the EU circumvent the sanctions, it lends credence to outliers within the bloc to withstand pressure from Brussels to support a strong common position on Russia."

And the difficulties Serbia is causing Brussels don't end with sanctions. "This whole situation is a major pain for us, because it ties in with the conversation about whether or not Ukraine should join the EU," said one senior European diplomat. Ukraine formally applied for EU membership in early March, a process that can take years even when the bloc's members fully support a new country joining.

Multiple officials and diplomats explained to CNN why this debate is so tricky for the EU and its internal conversation about the bloc's future.

Some member states want to speed up the process for Ukraine, and think Serbia's lack of alignment with the EU's approach on Russia makes a case for countries that want to align as soon as possible to get preferential treatment.

Others don't want Ukraine or the Western Balkan nations to join at all, fearing that they would alter the balance of the EU, giving eastern European states more power in a bloc that has historically been dominated by Western European countries like Germany and France.

Finally, some member states share a degree of Euroskepticism and would welcome another member state less enamored with calls from some countries, notably France, for the bloc to become more closely politically integrated.

All this might seem insignificant in the grand scheme of things, while a war is being fought on the European continent. However, Putin's invasion of Ukraine has created an opportunity for Europe's security map to be redrawn.

To some extent, countries traditionally aligned with the US have grasped the opportunity to strengthen Western security with both hands. Finland and Sweden appear set to join NATO while others, most notably Germany, have committed to huge increases in defense spending.

The UK, no longer part of the EU, has worked well with its European allies and shown that -- despite Brexit -- it can still play a leading role in a united European front.

On the other hand, the chaos and uncertainty also creates opportunities for people in positions like Vucic's. He is useful to Brussels and to Moscow and clearly feels he can continue playing both sides for all they're worth.

The EU has faced many difficulties since the Ukraine crisis began, and keeping all 27 of its member states on side has been no easy task. But the fact that Serbia's gas deal happened in the same week that EU leaders met to have a showdown over banning Russian energy (one that ended with a fudge) underscores the extent to which some things are simply out of Brussels' centralized hands.

As time goes on, that could become a very tricky issue for the future of the European project, CNN reports.