‘So far, so good’ – Is it enough? | EDITOR’S NOTE on Georgia’s economic growth 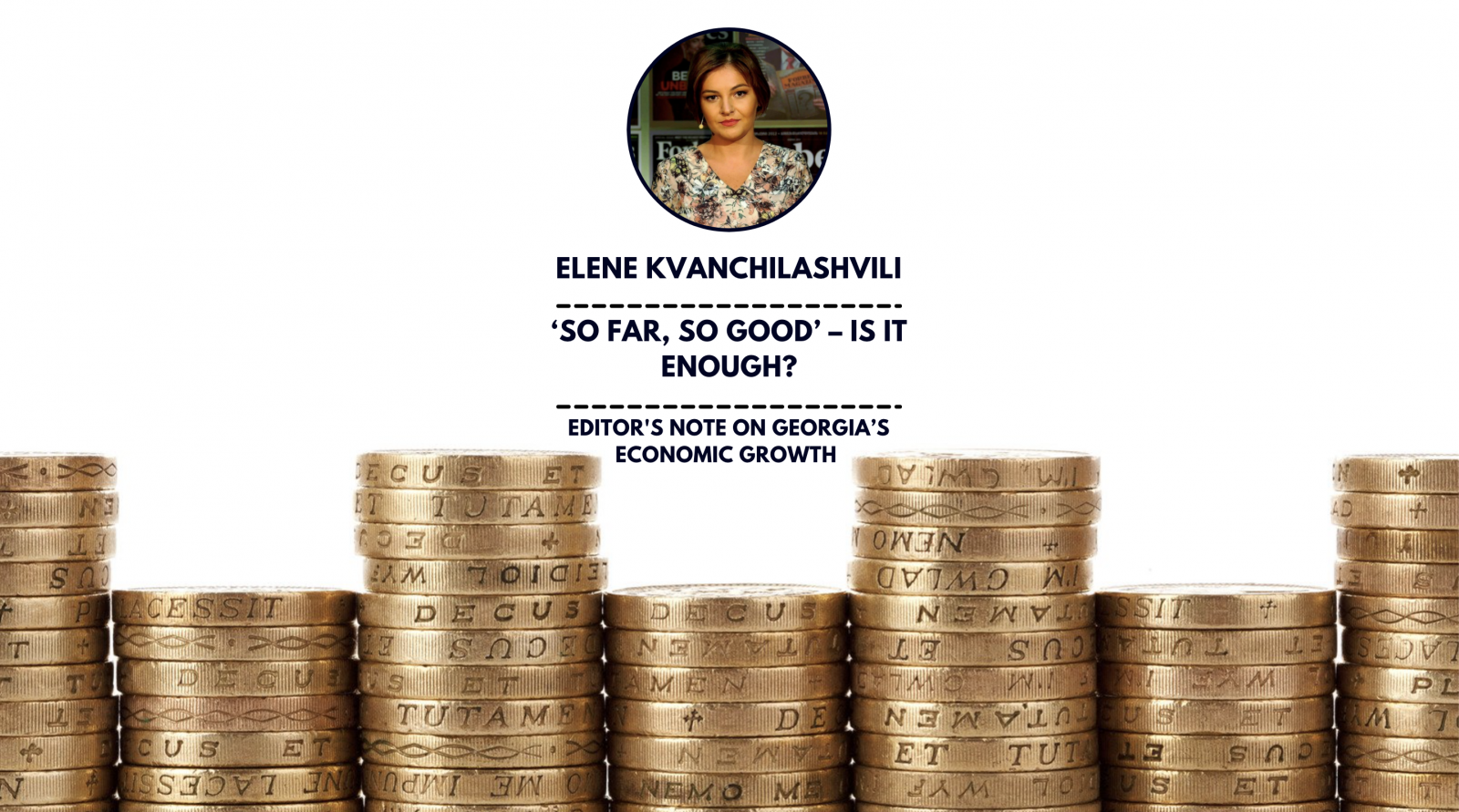 By the way, according to the World Bank, Georgia ranks 21st in the world in terms of dependency on remittances. Almost 13% of the country's economy is generated by remittances sent by Georgian citizens working abroad. Without these funds, the size of the country's local demand would have been much smaller. World Bank statistics are based on 2019 data when Georgia received $ 1.73 billion in remittances. In the pandemic, 2020 remittances reached a record $ 1.88 billion, which means that Georgia will be included in the top twenty countries dependent on remittances in the following ranking.

This trend of trade recovery is a global trend. World trade's recovery from the COVID-19 crisis hit a record high in the first quarter of 2021, increasing by 10% year-over-year and 4% quarter-over-quarter, according to UNCTAD's Global Trade Update. This means it took four quarters after the start of the pandemic-induced recession for world trade to return to pre-recession levels: By the fifth quarter – Q1 2021 – we already see global trade higher than pre-crisis levels, with an increase of about 3% relative to Q4 2019. The report also says that although in Q1 2021, the value of trade in goods was higher than the pre-pandemic level, but trade in services remains substantially below averages. This is something to keep in mind while talking of Georgia's economic recovery, where tourism and services have a substantial share.

In April 2021, Georgia earned $ 49.9 million from tourism; the figure hit a record high since the pandemic began. In April, Georgia received a total of 82,519 international visitors, which is an increase of 140% compared to 2020. The growth is due to flight resumption, as 40% of the visitors came by air. According to the National Bank of Georgia, the amount of money spent by these visitors is estimated at $ 49.9 million, which is up by 487% compared to April 2020.

Numbers look promising, but we should not forget that the basis point last year was so low, the change now seems sufficient. However, when compared to 2019 levels, it becomes clear that if the vaccination pace does not pick up, then Georgia is set to lose at least 2 or even 3 years of its development.

This is what we heard from the Deputy Minister of Finance Giorgi Kakauridze recently. "It is a bit early to assess how soon the economy will recover after the lifting of regulations – Kakauridze stated - Of course, some load will remain on the budget, as a full recovery will not be possible this year.
It is likely to take 2-3 years to return to pre-pandemic levels. However, I think the second half of the year will be a big step forward in this direction.
From the next year, it will be possible to assess whether it is a steady increase of unemployment or not and how much it will grow social spending".
The recent figures from Geostat show that the unemployment rate increased by 3.7 ppts to 21.9% in 1Q21. Out of employed persons, the share of hired labor declined by 1.3ppts y/y and accounted for 69.3% of the total, while the share of self-employed persons increased by 1.2ppts y/y to 30.6% of the total.
Expectations of the Finance and Economy Ministers of Georgia are more optimistic. "I am absolutely convinced that tourism is recovering faster in Georgia than we initially expected with pessimistic forecasts - Natia Turnava, Minister of Economy and Sustainable Development said recently - I think the recovery will be more than 30%, it could be up to 50%. Of course, a lot depends on the global pandemic, but vaccination has started. We see that numerous groups from different countries are already visiting us".
Answering a question from BMG, last week, Finance Minister Lasha Khutsishvili said that the government plans to revise its 2021 economic growth forecast. According to the Minister, the government has decided to adjust the economic growth benchmark due to the improved economic parameters. "Certainly, there is no revision in the direction of reduction. Expectations are better than they were during the year, and both export data and other economic activity data are better than we expected at the beginning of the year. We are talking about adjusting for (GDP growth) growth rather than declining," he said.
In the first quarter of 2021, the Georgian economy shrank by 4.2% compared to the same period in 2020. The economic growth during the first quarter evolved like this: January - minus 11.5%; February - minus 5.1%; March - growth of 4%; April economic growth statistics will be published by the end of this month. Parliamentary Budget Office estimates that real GDP growth in Q2 2021 will be positive and reach 13.9%; however, still lagging by 1.2% 2019 levels of growth.

In early April the IMF cut its forecast from 4.3% to 3.5%, and a few weeks ago, it was followed by the Asian Development Bank, which cut its 2021 growth forecast from 4.5% to 3.5%.
"It was a difficult period. It continues to be a difficult period. But we are expecting the recovery to begin in 2021 – Shane Rosenthal, ADB's Country Director, told me when the growth forecast was published this month - We think it's going to be led largely by domestic demand, but it really will depend on the success of the vaccination process and on how quickly external demand for tourism rebounds".
Before that, I interviewed IMF. "In the absence of enough vaccination, unfortunately, lockdowns become inevitable, and these lockdowns have very negative economic implications in every country, not only in Georgia. So when it comes to Georgia and pandemic situation requires a new lockdown, then the risks to our 3.5% growth forecast will be to the downside: In other words out forecast doesn't incorporate another lockdown assumption in itself – Selim Cakir, IMF's Resident Representative, told me in an interview for The Checkpoints - Now over the medium term we still think Georgia's growth rate will recover to slightly above 5% supported by the infrastructure spending along with the gradual recovery in external demand but the pandemic, of course, will leave some lasting damage: If you look at the level of real output we expect in 2024 now it is about 11% low compared to the pre-pandemic projection we had for that year. A lot again will depend on how the pandemic evolves".
Looking at some figures here: At this point, more than 110 thousand people are vaccinated in Georgia, which means that over 4 thousand people are being vaccinated daily. Roughly 17 thousand have had both their jabs. National Vaccination Plan for Georgia says 60% of the population should be fully vaccinated by 2021. Such pace makes it a challenge.
Last week my guest on the live show Analytics with Elene Kvanchilashvili on TV Pirveli was Sebastian Molineus, WB's Country Director for South Caucasus who said that if Georgia maintained the pace of roughly over 2 thousand jabs per day, then it would take the country 4.3 years to vaccinate the 60% of the population, adding that the government of Georgia had been working hard to secure vaccines for the country, including with the support from World Bank and that we would be hearing very good news coming soon in this respect.
Overall, "our outlook is a little bit more optimistic than that of IMF and the ADB. We see already that the economy grew 4% in March compared to last year, and we also see positive trends in mobility tax collection energy consumption across the month of April and May, and all of this points to a robust recovery – Sebastian Molineus told me last week - We have a baseline scenario where we see 4% growth in 2021, and then towards the end of 2022 we see a return to growth pre-COVID levels so around 5% or so. However, there is also an upside or a downside scenario. And this very much will depend on - number one – will there be subsequent waves of the pandemic and two – the rollout of the vaccination in Georgia – these are going to be critical in particular for the tourism and making sure that Georgia is an open economy".
So, to sum up, the expectations of three main IFIs in Georgia – WB, IMF, and ADB – first, all of them agree that times are very difficult and it's not easy for Georgia; second, all of them believe the recovery period is going to be an opportunity to rethink the type of growth that we see in Georgia in so far that it is widely benefiting a wider population of the country and making Georgia a more robust, more resilient economy in the face of the future shocks and last, but not the least, as they see it, if Georgia manages to come out of this crisis with still a healthy financial system, with adequate foreign exchange reserves despite a depreciated exchange rate and the slowdown in the activity, it won't still be a bad outcome.
"We will say, so far so good" – is the phrase that I remembered from the interview with IMF's Selim Cakir, and which to me sums up the IFI community attitude in general.
Meanwhile, ILO says Georgia is among the top 10 countries - #10 country - globally by unemployment.
So, my question is: Is 'so far so good' enough?
IMF Tourism Natia Turnava Trade NBG world bank Ministry of Economy World Bank GDP Selim Cakir Sebastian Molineus Covid19 Ministry of Finance Remittances pandemic Giorgi Kakauridze Lasha Khutsishvili georgian economy Income ADB National Vaccination Plan

76 million-year-old dinosaur skeleton to be auctioned in NYC