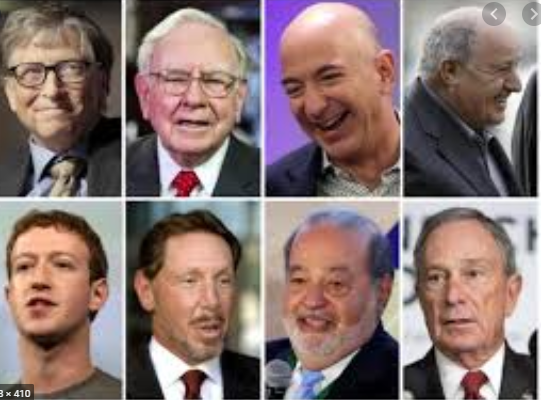 As the coronavirus pandemic clobbers the U.S. economy, leaving nearly one in six workers without a job, some of the wealthiest Americans have actually seen their massive fortunes grow.

For example, Amazon CEO Jeff Bezos' net worth jumped by more than $28 billion from last year to a $146 billion, according to the Bloomberg Billionaire Index.

With millions of Americans stuck at home in an attempt to mitigate the spread of the virus, consumers are increasingly relying on the e-commerce behemoth to deliver sundries to their house. Amazon shares were hovering close to $2,372 on Tuesday afternoon, which is up nearly 25 percent from the beginning of 2020, when they were around $1,898 per share.

Steve Ballmer's fortune grew by $5 billion. The former CEO of Microsoft is now worth $63.3 billion, compared to the same period last year. And the net worth of Oracle co-founder Larry Ellison increased by $1.3 billion since last year, according to the Bloomberg index.

The heirs to the Walmart fortune, Rob, Jim and Alice Walton, fortunes soared by a total of $6.42 billion. Similar to Amazon, the price of Walmart shares has swelled compared to the pre-coronavirus days. Shares of the discount retailer were close to $128.22 on Tuesday, which is up roughly 8 percent since the beginning of January.

Not every billionaire has made it out unscathed. The richest 10 individuals' wealth fell by about $25 billion, compared to a year ago.