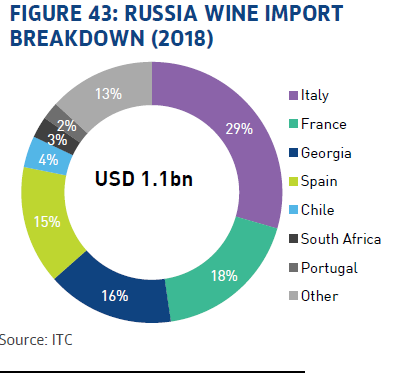 TBC Capital has published a research about wine industry in Georgia. According to the research, Georgia is the third largest exporter of wine to Russia, the twelfth largest wine importer worldwide. In 2018, Russia’s wine import totaled USD 1.1bn, of which 16% originated from Georgia. Italy (29%), France (18%), Spain (15%) and Chile (4%) were the other four in the top five largest wine exporters to Russia by value.

Georgian wine export diversification increased during the Russian embargo, but the exposure of the domestic wine sector to Russian market is still high and increases. All other wine exporters, but Armenia, that sends 70% of its small-scale wine exports to Russia, have lower exposure to the Russian market. In 2018, Georgia sold 58% of all its exported wine to Russia (60% in 2019), while the corresponding figure stood at 50% for Ukraine, 36% for Serbia, only 8% for Moldova. The exposure for the traditional or high-tech wine producers was even lower, ranging 0-3%. Familiarity to Georgian wines in Russia easies the export, but the current high exposure to single market encompasses higher risks for businesses in the long-term.

Russian embargo in 2006 forced Georgian winemakers to seek the new markets and modernize production. Following the embargo, Georgian wine producers started to invest heavily to improve the quality to focus on markets with higher purchasing power, directing their products to European, as well as Asian markets. As Russia lifted trade restrictions in 2013, diversification decreased, but export concentrations remained below 2005 level. Overall, the political risks and low average export price of this particular market remain a challenge for the Georgia’s wine industry in general. On the flip side, currently the sector is more resilient to potential downsides.

Hypothetically, the embargo would depress the profitability of wine producers but the industry can remain resilient below the dependency threshold of 30%. A hypothetical company with the dependency beyond this level might start experiencing the problems with debt service through operating cash flow.

Farmers producing grapes are more vulnerable to embargo than wine producers. Wine producers could decrease production costs by purchasing lower amount of grapes and smooth the negative effect from decrease in sales but farmers will need subsidies from the government to compensate losses and remain resilient.