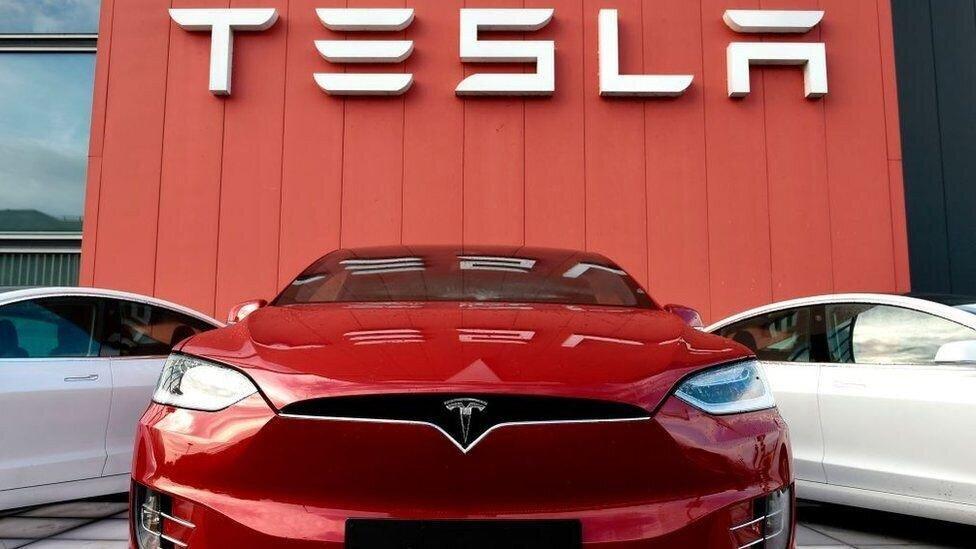 Back
Tesla surpassed a market value of $1 trillion on Monday, making it the fifth such firm to reach the milestone.
Shares in the electric carmaker climbed 12.6% after it struck a deal to sell 100,000 vehicles to the car rental firm Hertz.
Tesla has been the world's most valuable carmaker for some time, but brands like Ford and GM make more cars.
Previously only Apple, Microsoft, Amazon and Google-owner Alphabet have reached a $1tn valuation.
For years, Tesla struggled to ramp up production of its cars, leading some investors to speculate it would fail.
But last year the company, led by billionaire Elon Musk, upped its game and became profitable for the first time, prompting its shares to take off.
Following the jump in its share price, Mr Musk's 23% stake in the business is worth around $230bn.
The deal with Hertz is the biggest-ever rental car order for electric vehicles and seen as a further vote of confidence.
Hertz will pay $4.2bn for 100,000 Model 3s over the next 14 months, which amounts to about a fifth of its fleet. The rental firm will also build a network of charging stations.
Teslas have a range of about 200 miles per charge, but there is a dearth of charging infrastructure in the US - something the Biden administration hopes to change.
"Electric vehicles are now mainstream, and we've only just begun to see rising global demand and interest," said Hertz interim boss Mark Fields.
Tesla produced around 500,000 cars in 2020 - far lower than the likes of Volkswagen which made 9.3 million, Toyota's 7.2 million vehicles and the Renault-Nissan-Mitsubishi Alliance which manufactured 6.8 million.
However, Mr Musk has set an annual sales growth target of 50% and eventually hopes to reach 20 million vehicles a year.
On Monday, it emerged that Tesla had withdrawn its latest update of Autopilot, the "full self-driving" car software, after drivers complained of problems.
Some drivers reported intermittent issues such as safety alerts sounding, despite no danger being present.
The firm has not said when the driver assistance software will be re-released.
In August, the US National Highway Traffic Safety Administration opened a formal safety probe into Autopilot system, which is in 765,000 US vehicles.
The investigation follows a series of 11 crashes involving Tesla models and emergency vehicles since 2018.
Tesla

UNWTO Members Supports Leadership And Back Plan For Tourism's Future