The Energy Indpendence Act of Georgia Under Developmnet - Songulashvili 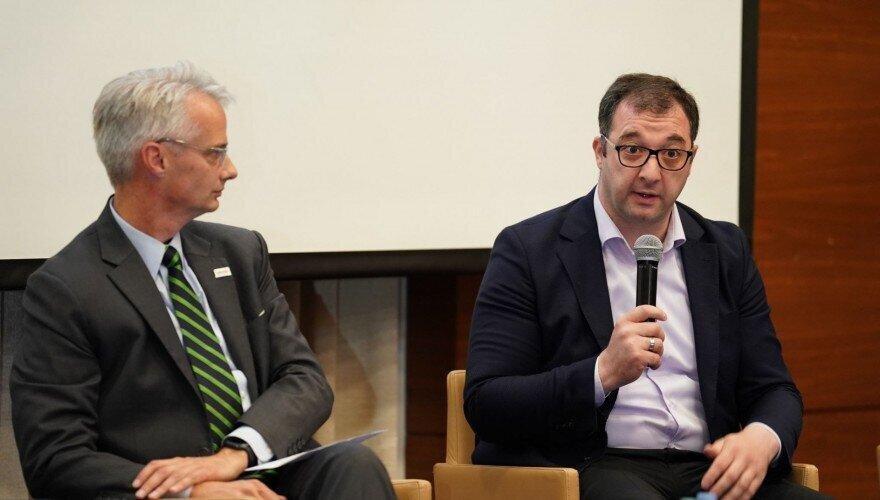 The Chair of the Sector Economy and Economic Policy Committee, David Songulashvili participated in the Panel Discussion within the USAID-organized Renewable Energy Investments Conference; the panel discussion was dedicated to the role of renewable energy in the energy security of Georgia.

According to him, Georgia intends to diversify its renewable sources. D. Songulashvili underlined several aspects to increase the interest of the investors.

“Generation of renewable energy traditionally takes hydro-resources in Georgia, dominating in the generation of electricity. The construction of more large HPPs is connected to certain challenges and thus, Georgia intends to diversify renewable sources by actively including solar and wind energy in the energy consumption structure. As a result, the share of the energy generated from renewable sources will increase up to 35% as of 2030. In my opinion, we may need to focus on certain projects to increase the interest of the investors. Inasmuch as Georgia shares no common geographic boundary with the Energy Community member states, the infrastructural connection requires the realization of the Black Sea submarine cabling project with the approximate investment value of over 3 bl. USD. Thus, Georgia will gain the potential to acquire the status of the energy hub in the Caucasus, which means that we will increase our competitive capacity, actively utilize renewable energy resources and export excess energy to the markets abroad. In 2022, the Georgian Government approved several projects on renewable energy generation with a total investment value of 200 ml. USD (solar, wind and HP plants with a total power of 150 MgWt). The Georgian State Electrosystem starts the construction of four new transmission lines with an approximate total investment of 270 ml EURO. The Georgian Government is aspired to revive the Khudoni HPP to increase the generated power by 1,5 times compared to the old schemes. Hence, the prime cost of the electricity will lower, which will facilitate the stability of the domestic tariffs and increase of the competitiveness”.

He dwelt on the EU decision to cut the import of the Russian energy resources and noted that the Energy Independence Act of Georgia is already under development.

“The possible implementation of the hereof projects are being clarified with the fact that the EU has made a decision to make Europe completely independent from the Russian energy resources. It required the re-armament of their energy systems costing 210 bl. EURO to achieve the goal as of 2027. At that, the countries like Ireland and Norway ensure the generation of 100% of energy by means of renewable resources. Other developed countries strive to, in the nearest future, fully replace energy with renewable resources. For instance, Denmark intends to achieve this plan for 2050. I presume that Georgia shall not linger behind these processes but get actively engaged to create a stable regulatory and market framework serving as the guarantee of the attraction of the investments in the energy generation and provision of stable/uninterrupted energy. Besides, we start the development of the Energy Independence Act strongly backed by the US Government, for which we are highly grateful. We have already communicated certain issues and started the process. Hence, in my belief, soon we will be ready to engage more parties concerned and ensure common public co-participation”, - he stated.

The Conference is being held within the USAID Securing Georgia's Energy Future Program and is attended by the representatives of the executive authority, energy companies, NGOs and donor organizations.