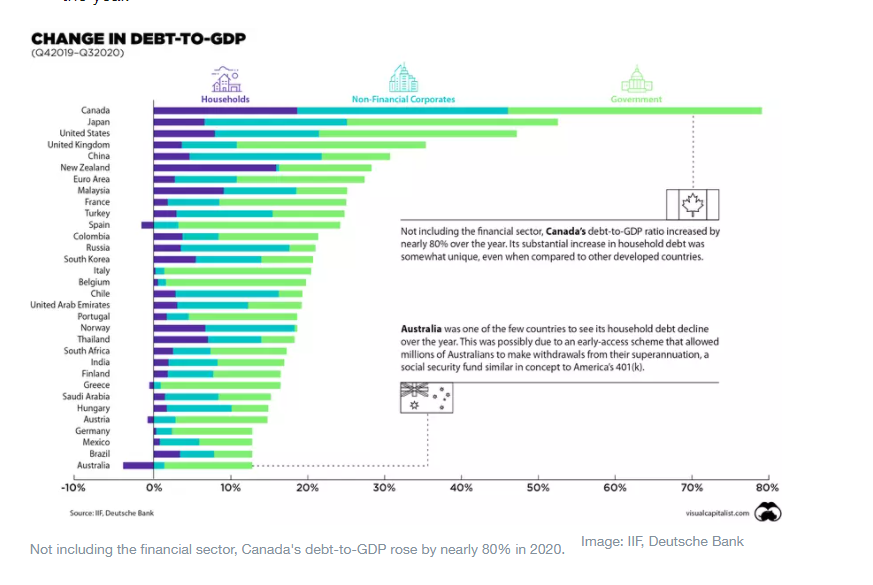 With vaccines slowly obtaining approval in various countries, the world may finally be on the path to overcoming the COVID-19 pandemic, Weforum.org reports.

The economic situation, on the other hand, is unlikely to improve anytime soon. Falling revenues combined with costly pandemic relief measures have increased global debt by $20 trillion since the third quarter of 2019. By the end of 2020, economists expect global debt to reach $277 trillion, or 365% of world GDP.

Developed economies represent four of the five countries seeing the largest increases in debt-to-GDP, but looking from a more macro angle reveals that debt levels are rising at a similar pace around the world.

To put these figures into perspective, economists often use the debt-to-GDP metric, which compares a country’s debt to its economic output. As the name implies, it’s calculated by taking a country’s total debts and dividing them by its annual GDP. Having a low debt-to-GDP ratio suggests that a country will have little issues paying off its debts, while a high ratio can be interpreted as a sign of higher default risk.

The actual definition of a “low” or “high” ratio is quite loose, though the World Bank believes there is a threshold for government debt at 77% of GDP. Every percentage point beyond this threshold has been found to detract 0.017 percentage points from annual growth.

A global roll out of COVID-19 vaccines is likely to end the ongoing health crisis and allow the economy to return to pre-pandemic levels, though delays are to be expected.

Regardless, this spells good news for governments and financial institutions around the world—economic output will recover, shrinking debt-to-GDP ratios. Whether or not borrowing will also slow down, however, is much harder to predict.

Government borrowing has been relied on to stimulate growth since 2008, and with 75% of Americans in favor of a second COVID-19 relief bill, public debt is likely to accumulate further. Private sector debt is following a similar trend, with non-financial U.S. corporations owing $10.9 trillion as of Q2 2020, up from $6.4 trillion at the start of 2008.

These growing debts have been manageable thanks to an extended period of low interest rates and loose monetary policy, but whether or not this is sustainable remains to be seen.