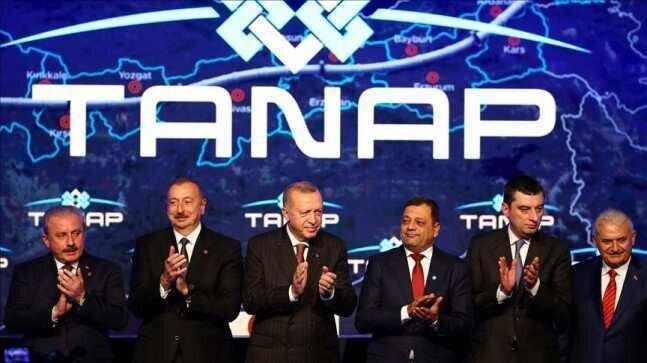 The Turkish and Azeri presidents and Georgian Prime Minister on Saturday inaugurated the Europe link of the strategic Trans-Anatolian Natural Gas Pipeline (TANAP).

The ceremony was held in the northwestern Turkish province of Edirne, near the border with Greece.

Turkish President Recep Tayyip Erdogan stressed that the project dubbed as the Silk Road of energy is a symbol of deep-rooted friendship between Turkey and Azerbaijan.

"A dream of supplying 16 billion cubic meters of Azeri natural gas to Turkey and Europe has come true," Erdogan added.

Erdogan added that TANAP is the most important part of the 3,500-kilometer (2,174-miles) energy corridor which extends from Azerbaijan to Europe.

Erdogan stressed that Turkey sought to contribute to the regional prosperity with the conclusion of the project, and added: "While guaranteeing our country's energy needs with TANAP, we also aimed at contributing to the safety of Europe's energy supply."

Bulgaria, Greece, North Macedonia, Albania, Serbia and Bosnia Herzegovina would also benefit from the mega project, said the Turkish leader adding that the TANAP was a project of "regional peace."

"This project has made it this far thanks to Turkey and Azerbaijan's relations based on mutual trust," Erdogan said.

The pipeline will begin carrying gas to the European section of the Southern Gas Corridor, an ambitious initiative of the European Commission for a natural gas supply route from the Caspian and Middle Eastern regions to Europe. It will pass through the Trans Adriatic Pipeline -- the European leg of the corridor.

Azerbaijani President Ilham Aliyev said the TANAP project will pave the way for boosting ties between the two nations.

"Today is a historic one. I hope the TANAP is going to last long, and Turkey, Azerbaijan and other neighboring countries will benefit from [TANAP]," he said.

"This project brings cooperation, stability, and long-term agreement," he said, adding the TANAP was more than just an energy project.

Emphasizing that both countries shared a trade volume of $3.4 billion in the first nine months of this year, he said the mega projects achieved by both countries would boost ties and added: "After all, economic power transforms into political power."

"TANAP is an energy project that reaches beyond the mountains, seas and straits with records to the inner parts of Europe," Donmez said.

"We always put forward the unifying mediator role of energy for the benefit of the region and all parties. Our energy diplomacy focuses on promoting regional stability and prosperity," said Donmez.

The TANAP project was officially launched in June 2018. It stretches from the Turkish-Georgian border to the Turkish-Greek border.

With an investment of around $7 billion, TANAP will deliver 6 billion cubic meters of Azeri gas to Turkey and 10 billion to Europe per year.

The pipeline passes through 20 provinces and 67 districts of Turkey.