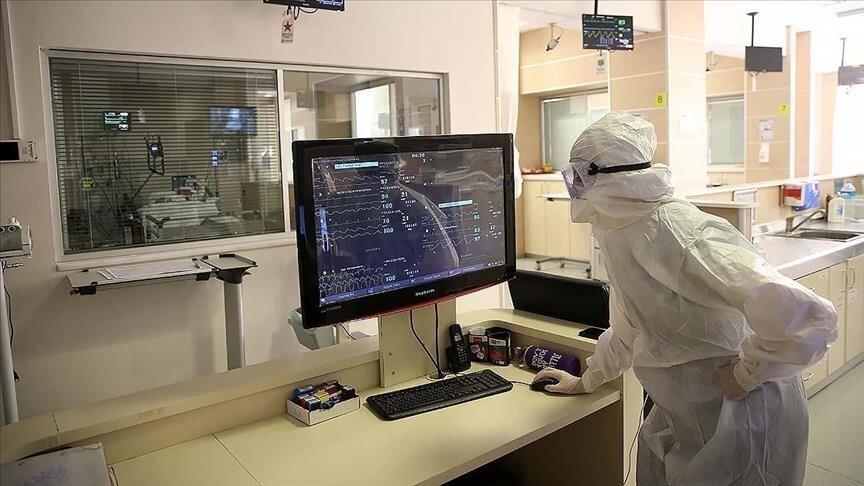 Back
Turkey announced Tuesday that it plans to impose a two-week partial lockdown to help curb a recent rise in coronavirus cases.
Speaking to reporters following a three-hour cabinet meeting, President Recep Tayyip Erdogan said the new measures against the virus would go into effect on Wednesday evening and continue for the first two weeks of the Muslim holy month of Ramadan.
Under the new restrictions, the weekday curfew will start at 7.00 p.m. instead of 9.00 p.m. and last until 5 a.m., during which inter-city travel will also be banned except for necessary and urgent situations.
Cafes, restaurants and teahouses will also only provide home delivery and takeaway services, while wedding halls, sports centers and game halls will be closed until the conclusion of the Eid holiday marking the end of Ramadan in the country.
Erdogan said restrictions on public transportation for people over 65 and under 18 would be in effect again.
With its stricter measures during Ramadan's first two weeks, Turkey aims to significantly reduce the number of cases and deaths related to COVID-19, Erdogan said, adding more rigid measures could be imposed if progress was not made in the first two weeks of the holy month.
Meanwhile, Turkey’s Ministry of National Education announced that all education institutions except for 8th and 12th grades along with pre-schools would start remote education as of April 15.
On Jan. 14, Turkey began a mass vaccination campaign against COVID-19 starting with health care workers along with top officials to encourage public confidence in the vaccines.
According to the Health Ministry's official figures, Turkey has so far administered nearly 19.18 million coronavirus vaccine jabs across the country.
Over 11.48 million people have received their first doses of a vaccine against the novel coronavirus, while second vaccine doses were administered to nearly 7.69 million people.
Since December 2019, the pandemic has claimed over 2.95 million lives in 192 countries and regions.
Over 137 million cases have been reported worldwide, with recoveries now over 78 million, according to figures compiled by US-based Johns Hopkins University​​​​​.
​​
EU ties, accession
Erdogan said that during last week's official visit by top European officials to Turkey, he had discussed a variety of issues with European Council President Charles Michel and European Commission President Ursula von der Leyen.
Among the topics discussed were visa liberalization in the EU for Turkish nationals along with Turkey's Customs Union with the bloc, the Eastern Mediterranean and the 2016 migration agreement, according to the Turkish president, who said he hoped the visit would be a turning point for bilateral relations.
"As we've always said, Turkey has always been transparent and sincere in its relations with the EU," Erdogan said, adding his country had taken steps to meet the required conditions for full EU membership, one by one.
He went on to argue that some countries had been granted membership in the bloc despite applying later than Turkey, which he said was ahead of many of these countries in terms of democratic and economic criteria.
Touching on the 2016 migration deal between Ankara and Brussels, Erdogan stressed that Turkey had fulfilled its commitments under the agreement, preventing an influx of irregular migration that would have paved the way for "serious political and economic crises" in Europe.
He also asserted that European countries had demonstrated their double standards towards Turkey by reacting to social unrest during the coronavirus pandemic in a way that "violated the principles of democracy and the rule of law."
Turkey must be subjected to the same practices and processes as other countries that were granted membership in the EU, said the president, underlining that his country remains fully committed to membership in the union.
Turkic Council
During the press conference, Erdogan said that in a virtual meeting the previous week with the leaders of Turkic Council member countries, they had discussed ways to boost cooperation on a number of issues such as health and trade.
"There are many countries seeking to join the Turkic Council, in addition to the [current] full and observer members. We see that it is time to turn this establishment into an international organization," he said, noting that the council was in need of a stronger institutionalization in line with its development and vision.
Barring delays caused by the pandemic, the council's eighth ordinary summit will be held in Turkey in November, according to the Turkish leader, who said Turkey would allocate a prestigious historical building for the council to meet its administrative needs.
D-8 Organization
Erdogan said he participated in the 10th summit of D-8 countries hosted by Bangladesh and noted that this organization, whose establishment was spearheaded by the late Turkish politician Necmettin Erbakan, still did not reach its rightful place in the world despite its history of a quarter century.
The president underlined that the D-8 was established on principles such as peace, justice, development, human rights, freedom and democracy and the international community was clearly in need of such values.
While this organization represents a population of 1.1 billion, the majority of whom are young people, Turkey has done and will do its best to further boost this organization, according to Erdogan.
Erdogan said he believed the D-8 organization would be able to serve humanity and its members by getting new members and partners, expanding economic relations and boosting social and cultural relations.
Russia and Ukraine
“I believe the dialogue channels we keep open with Russia regardless of the circumstances have led to truly successful results in the prevention of regional crises from escalating to dangerous levels,” the president said.

The Turkish president said his recent "fruitful" phone call with his Russian counterpart Vladimir Putin focused on a number of issues including tourism, the Ukraine crisis, Syria and Nagorno-Karabakh.
The "strong, effective and constructive diplomatic cooperation" between Turkey and Russia sets a good example regarding the resolution of many regional and global issues, according to Erdogan.
The Turkish leader noted that his country hosted Ukrainian President Vladimir Zelensky in Istanbul as part of the High-Level Strategic Council meeting, and the two leaders tackled many bilateral and regional issues with a focus on the escalating Donbass crisis.
Stressing that Ukraine and Turkey shared a common sensitivity on the Crimea issue, he said both sides agreed to rapidly sign a free trade agreement as soon as possible.
Every step taken in the direction of boosting bilateral ties between Turkey and Ukraine, two littoral countries of the Black Sea facing each other, serves in the interest of regional peace and tranquility as well as these countries, according to the Turkish president.
Libya
President Erdogan said Libya was not an ordinary country for Turkey as both sides shared a history of 500-year-long relations and Turkey greatly cared about the peace and serenity in the country.
Underlining that Turkey has never hesitated to side with Libya against attacks on its sovereignty, territorial integrity and political union, Erdogan said Ankara's support to Tripoli paved the way for stability and peace in the war-weary country.
The president went on to say that Turkey would provide any support necessary to the Libyan government to bring full sovereignty over the country, which he assured Libyan Prime Minister Abdul Hamid Dbeibeh.
In addition, he said he expected the international community to stop supporting coupists in the country and take side with the legitimate administration of the country, adding Turkey would continue to help heal, reconstruct and develop the country.
Source: AA