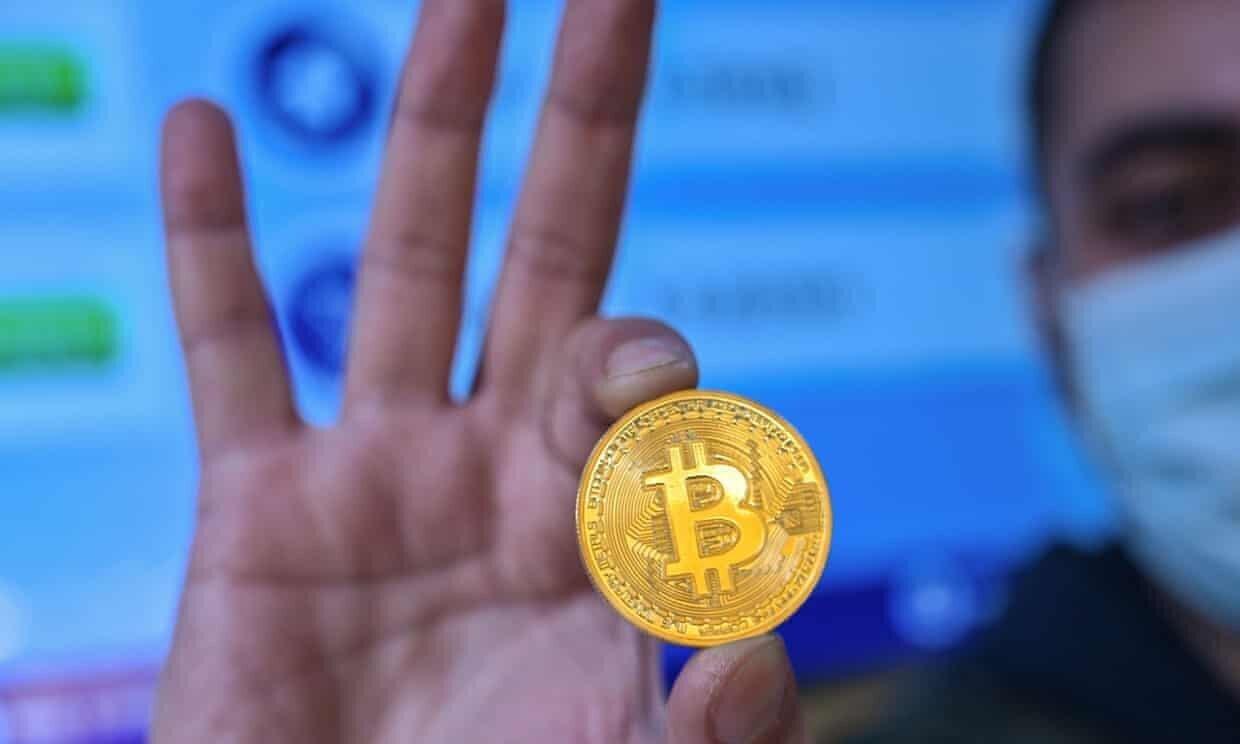 Back
The neighbourhood teahouse is a focus of daily life across Turkey, an Ottoman tradition that has endured through the centuries. At the Red Lightning teahouse in Çorum, the enterprising owners have one foot in the past and one in the future: it’s the first in the country where customers can pay in bitcoin.
“Everyone we know in Çorum is starting to invest in cryptocurrency. We think that in five years or so regular currency will be in decline, it will be replaced by digital ones. So we wanted to be in a good position now,” said co-owners Hüseyin Nalcı, 38, and Kerem Kutay Yıldırım, 28.
“The older customers think it’s a bit absurd. They made fun of us. But now the dürüm [wrap] shop next door is asking us to teach them.”
The Turkish lira slumped dramatically last month after President Recep Tayyip Erdoğan’s shock decision to fire the central bank governor, Naci Ağbal. The reserve is now on its fourth governor in less than two years, and the lira has lost half its value since a 2018 currency crisis.
Inflation reached a six-month high in March of 16.19%, well above a 5% target, and unemployment remains high, at 12.2%.
The latest economic turmoil has led to a surge in cryptocurrency trading in the country, with investors hoping to gain from bitcoin’s recent rally and shelter against inflation.
Data from the US researcher Chainalysis analysed by Reuters showed that trading volumes between the start of February and 24 March hit 218bn lira (£19bn) with a spike on the weekend Ağbal was sacked, up from just over 7bn lira in the same period a year earlier. Cryptocurrency worth 23bn lira was traded in the first few days after the shock announcement, the data showed, versus 1bn lira in the same timespan in 2020.
Turkish Google searches for cryptocurrency also hit a record high in the week before Ağbal was removed. The governor, who took over the post in November, was reportedly at loggerheads with Erdoğan over interest rate hikes: contrary to mainstream economic thinking, the president has repeatedly said that he believes high interest rates cause inflation.
Bitcoin’s climb to a new record of just under $62,000 (or more than £44,000) has seen interest in the digital currency soar worldwide: investors and companies have embraced the emerging asset despite warnings about its volatility.
“Turkish people like stable assets due to our history of high inflation,” Özgür Güneri, CEO of cryptocurrency exchange BtcTurk, told Reuters. “That is why generation after generation of Turks invested in gold, real estate and dollars.”
Turkish interest in cryptocurrencies has been growing steadily for several years, in large part because they are finite resources with a reputation for being immune to inflation.
So far, Ankara has not made any moves to regulate or tax the digital currency space, which adds to the appeal for Turkey’s youthful, tech-savvy population.
Erdoğan recently reiterated calls for Turks to invest gold and foreign currencies kept under the mattress in order to shore up domestic financial markets. The country’s recent economic troubles have had significant implications for his ruling Justice and Development party: its support has fallen away with the abrupt end of years of strong economic growth.
At Sirius Coin, a cryptocurrency cashpoint near the gold dealers of Istanbul’s Grand Bazaar, Mehmet, 35, said business was booming. The shop’s owners are getting ready to launch their own trading exchange by the end of the year.
“Everyone wants to get rich quick. Turks are no exception to that,” he said.
Source: The Guardian
Turkey Bitcoin