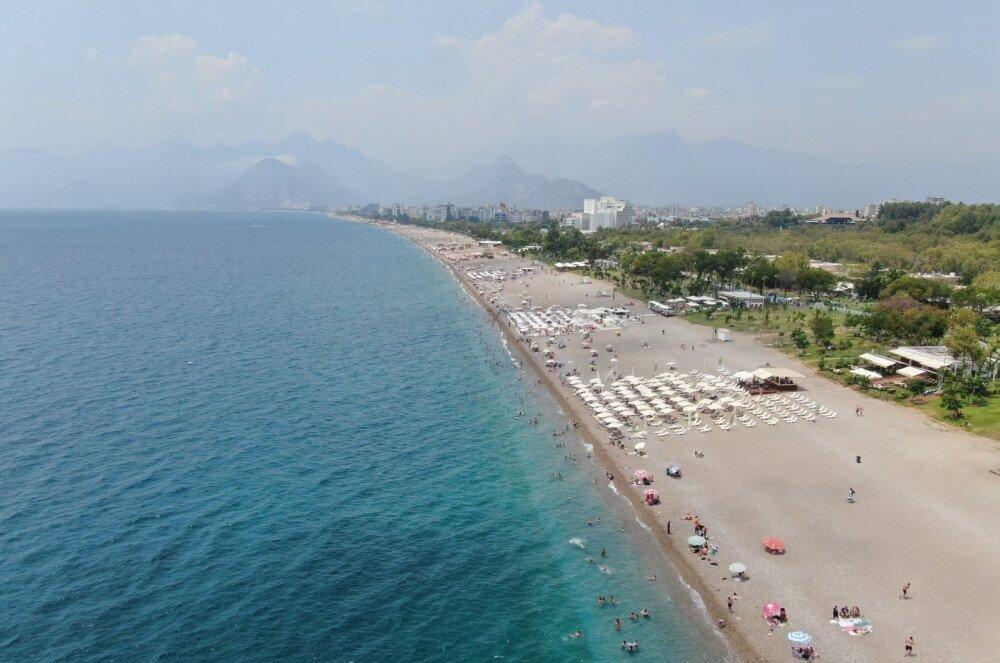 Back
The dynamism seen in Turkey’s domestic tourism during the Islamic holiday Qurban Bayram, also known as Eid al-Adha, gave hope to the industry that had a troubled season last year due to the COVID-19 pandemic.
The demand for the country’s touristic places was so high that the related figures surpassed that of 2019, which was dubbed the industry’s best year.
Turkey Hoteliers Federation (TÜROFED) head, Sururi Çorabatır, said that they were particularly pleased with the momentum gained in the domestic market during the holiday.
"In the domestic market, the figures of 2019, which was our best year in tourism, have been exceeded. We are at least 30% above the figures we had reached in the domestic market in the period that includes the 2019 Eid al-Adha holiday period,” he informed.

The number of foreigners visiting Turkey was also high and the country has hosted vacationers from more than 50 countries.
Russian vacationers made up the majority of the country’s foreign tourists as always, according to the tourism professional, while many tourists from countries including Germany, the Netherlands, Belgium, Bulgaria and Slovakia also preferred Turkey.
“Tourism activity makes everyone smile, not just tourism professionals,” Çorabatır noted, who added that they expect the activity in the industry to continue like this through the summer season.
He said that one of the reasons why demand is so high is that people all stayed at home last year due to the measures taken to prevent the spread of the virus and that now they yearn to travel more or arrange holidays.
Every region in Turkey, from the coastline to the central parts, attracts domestic and international tourists, Çorabatır said.
Emphasizing that a significant density has been reached especially in the coastal regions, Çorabatır continued, "The occupancy rates were particularly high in the Aegean and Mediterranean regions with domestic and foreign guests." Coastal regions, from northwestern Çanakkale province to southern Mersin, which are not as popular destinations as, for example, Antalya, were more popular than expected, he added.
For the central parts of the country, the famed Cappadocia was leading tourism demand as the region was full during the holiday. The picturesque region is a charming touristic hub in the central Nevşehir province, famed for its distinctive fairy chimneys, underground cities, cave hotels and hot-air balloon rides.
The decreasing number of new coronavirus cases along with the rapid vaccination campaign has driven demand for the tourism industry. Such a high number of tourists also fuel investments in the sector.
Being one of the investors, ORKA Hotels Group put into service the largest theme park investment of the southwestern Turkish province of Muğla, which is realized with its British partner J&S Leisures in the popular touristic district of Fethiye.
Orka World Theme Park, which is a first in the province, includes a Mayan temple, palaces, restaurants, many activities and shops.
The first phase of the project, which has been put into service, includes villas, hotels and shopping malls.
Stating that they continued their investments during the pandemic period, Ercan Torunoğulları, general manager of ORKA Hotels, told Turkish Sabah daily that they have a total investment of 140 million euros (TL 1.4 billion), including the theme park built for the Muğla region and four hotels to be built in the coming period.
“We have full confidence in our country and we will continue our investments,” he said, stating that this project will also contribute greatly to the promotion of the region.
Reiterating that the COVID-19 pandemic did not interrupt their investment plans, Torunoğulları said: “On the contrary, we invested more and attracted foreign investors. We attracted a lot of investors, especially from European regions or countries such as Russia, Uzbekistan and Kazakhstan."
The company is also in the construction business in the Muğla region, mainly building villas.
“We make 90% of our sales to foreigners. Even during the coronavirus period, the tourism sector somehow continues on its way, and this attracts the attention of foreign investors,” he said.
“Confidence in Turkey has not been shaken, we can clearly see this.”
Tourism Turkey Covid19 Global Tourism