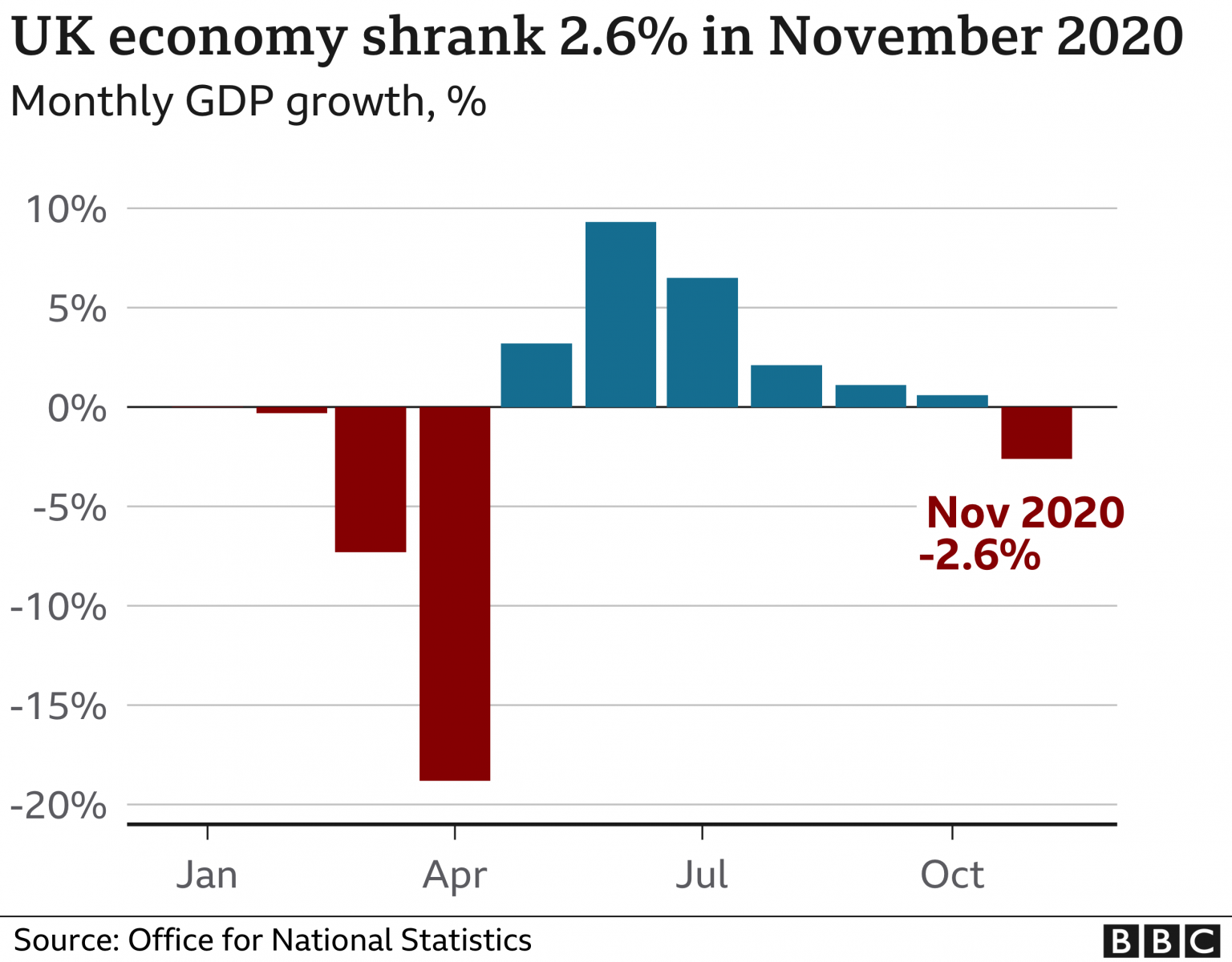 Back
The UK economy shrank by 2.6% in November as England was placed in lockdown for a second time, official figures show.
The Office for National Statistics said it meant gross domestic product was 8.5% below its pre-pandemic peak.
November's decline came after six consecutive months of growth.
Pubs and hairdressers were badly hit as the service sector suffered, the ONS said, but some manufacturing and construction activity improved.
The hit to the service sector - which accounts for about three-quarters of the UK economy - meant it contracted by 3.4% in November, and is now 9.9% below the level of February 2020.
Some economists said the November figure was better than expected, and it appeared many companies were better prepared for the second lockdown, with some sectors staying open for business and many firms having already put in place plans to expand online operations.
"Steps taken by businesses earlier in the year to Covid-proof their operations - combined with the time-limited nature of the restrictions, and schools remaining open - meant more companies were able to continue trading safely," said Alpesh Paleja, lead economist at the CBI employers' group.
Chancellor Rishi Sunak said the figures showed "it's clear things will get harder before they get better and today's figures highlight the scale of the challenge we face".
But he said the vaccine roll-out and economic support measures meant there were reasons to be hopeful. "With this support, and the resilience and enterprise of the British people, we will get through this," he said.
Shadow chancellor Anneliese Dodds said the figures showed the UK has an economic "mountain to climb".
Speaking to the BBC, she said it would be a "serious mistake" if Mr Sunak waited until the Budget in March before providing more support and confidence for business.
ONS director for economic statistics Darren Morgan said: "The economy took a hit from restrictions put in place to contain the pandemic during November, with pubs and hairdressers seeing the biggest impact."
However, he said many firms adjusted to the new pandemic working conditions, such as by expanding click and collect and other online operations.
He added: "Manufacturing and construction generally continued to operate, while schools also stayed open, meaning the impact on the economy was significantly smaller in November than during the first lockdown.
"Car manufacturing, bolstered by demand from abroad, housebuilding and infrastructure grew and are now all above their pre-pandemic levels." Construction activity grew by 1.9% during the month.
Source: BBC
Covid19 UK Economy