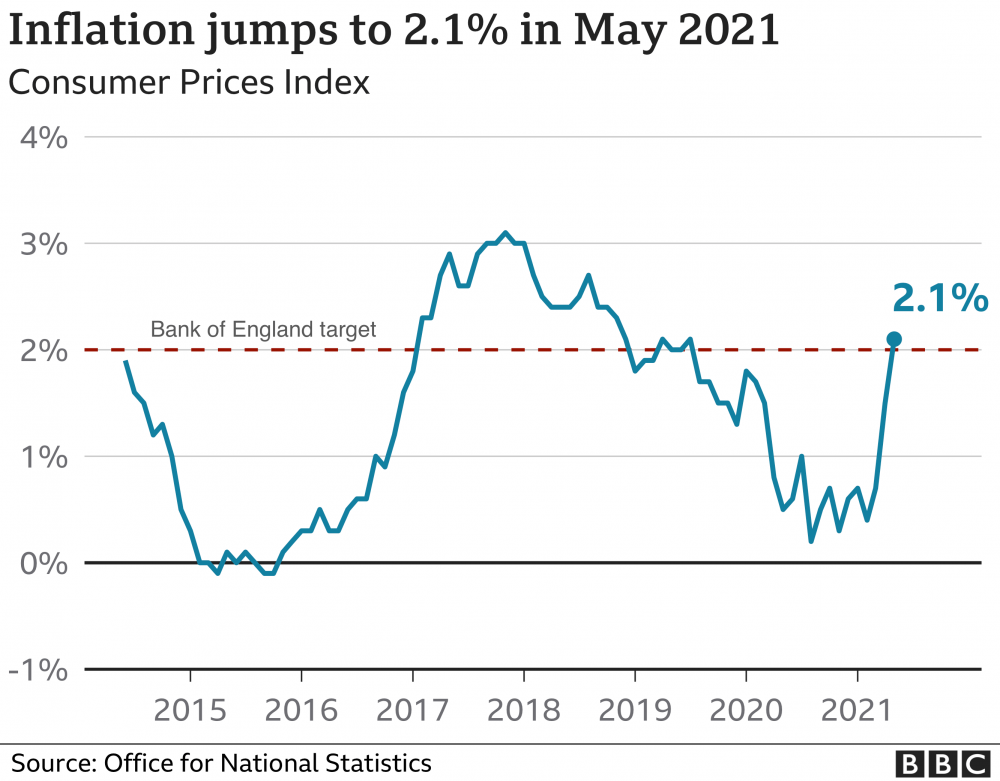 Back
The UK inflation rate jumped to 2.1% in the year to May, the highest for almost two years, as the easing of lockdown sparked a rise in consumer spending.
The Consumer Prices Index measure of inflation rose from 1.5% in April, according to the Office for National Statistics, driven by the rising cost of fuel and clothing.
The rate is now above the Bank of England's 2% target for inflation.
That will fuel the debate about whether it's time to raise interest rates.
May's reading was above most economists' forecasts of an increase of about 1.8%.
What is driving inflation?
ONS chief economist Grant Fitzner said the biggest single rise was coming from fuel prices, which were falling this time last year as the lockdown started to bite.
Petrol and diesel saw a 17.9% price surge over the past year, representing the highest increase for more than four years.
Crude oil prices have been increasing over the past few months, which is expected to continue feeding through to pump prices.
Clothing prices also increased by 2.3%, the biggest rise since 2018, as retailers significantly reduced their discounting a month after welcoming customers back into stores.
The rise in inflation was, however, partly offset by a negative impact from cheaper food and drink prices. Bread, cereals and meat prices all dipped after seeing significant rises a year earlier.
Karen Ward, a chief market strategist at JP Morgan Asset Management, told the BBC: "Consumers have got all these savings they accumulated last year when they weren't allowed out. But supply is really struggling to keep pace, and so what we are seeing therefore is pops of prices in various aspects of the consumer basket."
inflation pandemic Global Economy CPI UK Economy Global Inflation

Serbia to start buying electricity from Azerbaijan in early 2023