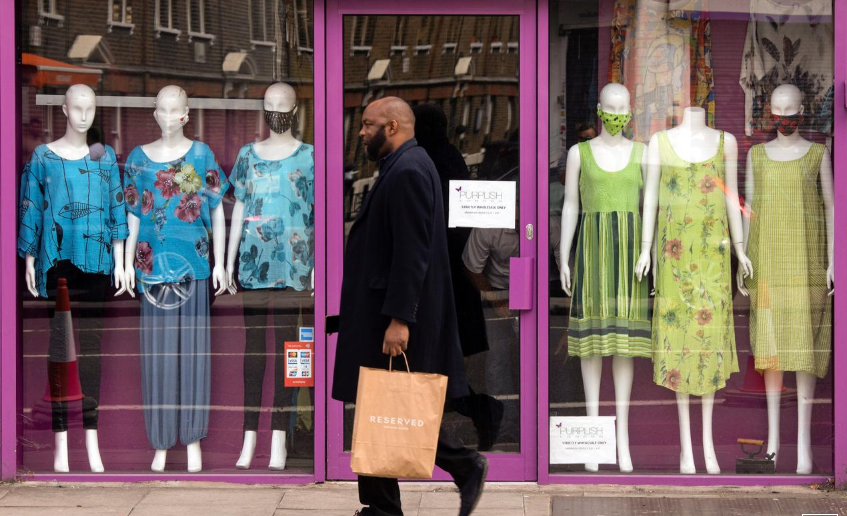 British retail sales grew more strongly than expected in June and returned almost to their pre-lockdown level as non-essential stores in England reopened to the public in the middle of the month.

Retail sales in June grew by 13.9% from May, above the average 8% growth forecast in a Reuters poll of economists.

Compared with June 2019, sales were down 1.6%, a smaller fall than 6.4% seen in the Reuters poll.
The level of sales last month was down by only a marginal 0.6% compared with February, before the coronavirus lockdown.

Excluding fuel sales, which have been depressed by less commuting and other travel, the level of sales was 2.4% higher than in February.

Britain’s economy shrank by more than a quarter in March and April, according to official figures, and only recovered slightly in May when there was a limited relaxation of lockdown rules imposed on March 23 to slow the spread of COVID-19.

The Bank of England’s chief economist, Andy Haldane, has pointed to private-sector data suggesting a rapid, V-shaped recovery with the economy growing by around 1% a week, though many of his colleagues are doubtful about the prospects of a sustained recovery.

The British Retail Consortium said earlier this month that spending among its members - typically large high-street chains - was 3.4% higher this June than last year.

Friday’s figures showed that retail sales slumped by 9.5% over the second quarter compared with the first three months of the year.

Online spending, which soared at the start of the lockdown, fell as a share of overall spending as shoppers in England were able to return to stores from June 15 onwards. But at 31.8%, it remained much higher than February’s 20%.

Consumer sentiment is still well below its level before the coronavirus struck Britain, according to a survey released earlier on Friday, and cafes and restaurants have reported subdued demand since they reopened on July 4.

The disease has killed more than 45,000 people in Britain, Europe’s highest death toll. BoE policymaker Jonathan Haskel said on Thursday that persistent health worries as well as a jump in unemployment risked halting the recovery.

New cases of coronavirus have been revealed in Georgia – renovated statistics

11 employees of Ministry of Internal Affairs test positive for coronavirus