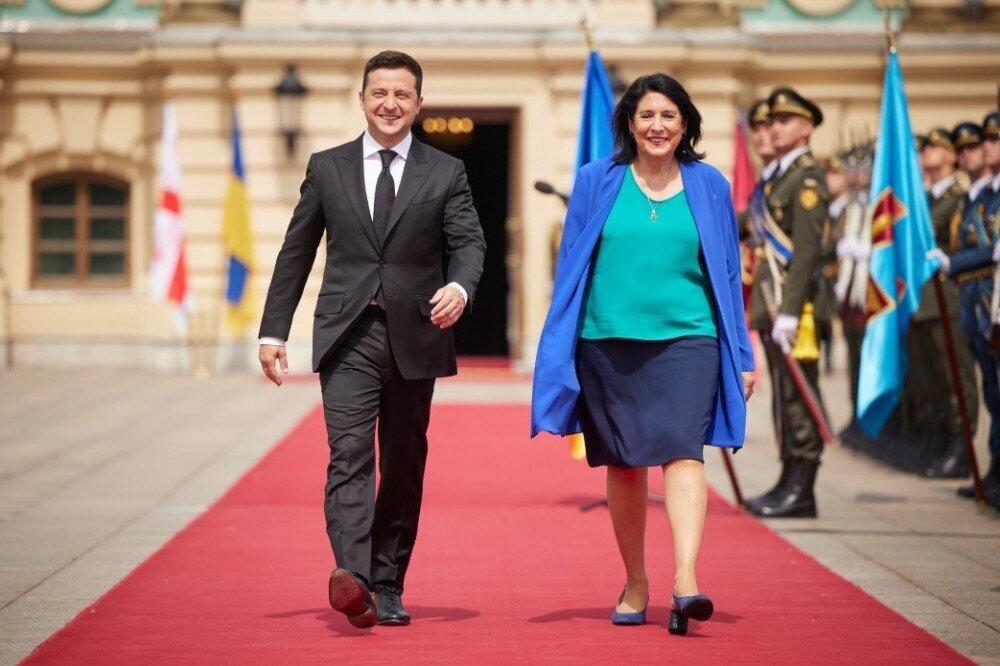 Back
The Presidents of Georgia and Ukraine have met in Kyiv earlier today. It is Georgian President's third time meeting with her Ukrainian counterpart and her first official visit to Ukraine.
“A joint vision toward European and Euro-Atlantic integration brings Ukraine and Georgia together as two close friends and partners,” said Salome Zourabichvili, President of Georgia.
"Ukraine and Georgia are united by common goals of full-fledged membership of the European Union and NATO," President of Ukraine Volodymyr Zelensky said during a joint press conference with Salome Zourabichvili, Ukrinform reports.

At the same time, Zelensky reaffirmed "Ukraine's strong support for Georgia's sovereignty and territorial integrity within its internationally recognized borders."

He also thanked Georgia for its continued support for Ukraine's sovereignty and territorial integrity, non-recognition of the attempted annexation of the Ukrainian peninsula of Crimea, and condemnation of Russian aggression in Donbas, eastern Ukraine. Zelensky expressed hopes for active cooperation with the Georgian side within the Crimean Platform.

"We hope for active cooperation with the Georgian side within the framework of the Crimean Platform in order to protect the rights of Crimeans and de-occupy the Crimean peninsula," Zelensky said.
According to Zelensky, during the meeting “energy security has also been discussed,” adding that it was “agreed to make it a priority area of further cooperation.”
The welcoming ceremony took place at the Mariinsky Palace in Kyiv. In addition to talks with President Volodymyr Zelensky, Zourabichvili will also meet with Prime Minister of Ukraine Denys Shmyhal and Verkhovna Rada Chairman Dmytro Razumkov.
NATO Ukraine European Union Georgia Salome Zourbichvili Volodymyr Zelensky