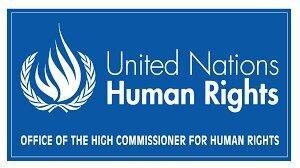 As of Sunday, at least 1,417 civilians have died in Ukraine since the Russian invasion began, the UN Human Rights office (OHCHR) said Monday.

Of those who died, at least 121 were children, according to OHCHR. At least 2,038 civilians have been injured.

"Most of the civilian casualties recorded were caused by the use of explosive weapons with a wide impact area, including shelling from heavy artillery and multi-launch rocket systems, and missile and air strikes," OHCHR said in the statement.

Many of the killings occurred in Ukrainian-controlled parts of the country, which have suffered heavy bombardment from Russian forces — including areas in western Ukraine far from the frontlines. At least 67 of the deaths occurred in the eastern Donetsk and Luhansk self-declared republics, according to the statement.

The UN OHCHR warned the civilian death toll is likely to be much higher.

"Especially in government-controlled territory and especially in recent days, as the receipt of information from some locations where intense hostilities have been going on has been delayed and many reports are still pending corroboration," the agency said, CNN reports.