What Is Pragmatism to Georgia? Interview With Giorgi Papava 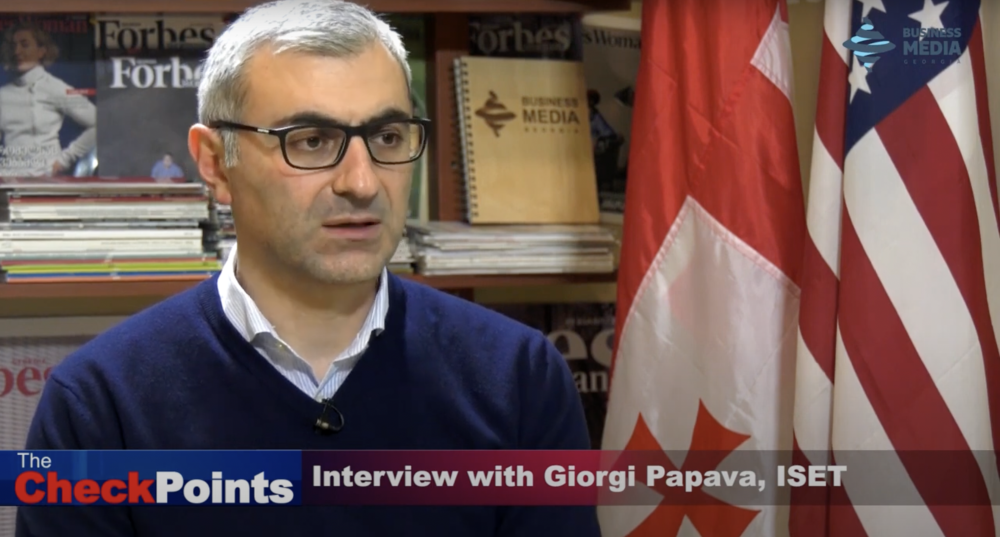 Back
Georgia and Moldova have also filed their signed applications to the EU. So in these circumstances, the main question that Georgia has to answer itself is what steps should it consider as pragmatic steps, and should it give Russia a chance to blackmail its Euro-Atlantic future with the threat of war? When Russia's military presence gets closer every day to Tbilisi through creeping occupation. The CheckPoints set down with Giorgi Papava for a one-to-one interview.
Elene Kvanchilashvili: Thank you for your time. Putin's devastating war in Ukraine. How does this relate to Georgia? Is it important for Georgia to clearly show its side in this war?

Giorgi Papava: First of all, thanks for having me. What is going on today in Ukraine is directly related to Georgia. Ukrainians today, Georgians in the past are facing the Russian aggression and can clearly see what their neighbor is made of and what Russia is willing to do in order to achieve its mysterious goals. The way the war in Ukraine will end will determine the future of Georgia to a very large extent. You can imagine a country which can become under attack at any time, what kind of development that country can achieve? If until the war in Ukraine, there were still years of to some extent the misunderstanding in part of Georgia's public and in part of its government that being nice to Russia may, yield some results, that perspective will disappear in the nearest future if it has not already disappeared. If the war does not end the way we'd like and Ukrainians like, we will be in a neighboring country to a world aggressor who can do anything like who can not care about anything, who can create its own world and in that world conquer you. All this translates into lost lives, lost opportunities, lost futures to families. It is unimaginable how we as a country should not declare our side in this. We should be very clear, transparent, that our future is along with Ukraine, along with our Western allies. This is the only path of development not only for Georgia but for any country in the world, especially for Georgia.

Elene Kvanchilashvili: We hear from the government some mixed messages. One of the messages is that Georgia is not in the same position as the US, as the West as more developed countries like Germany, for example, because of the 2008 war. We hear that Georgia must be pragmatic in this situation. Now, you said that pragmatism for Georgia is to take a clear side.

Giorgi Papava: Any development of the well-being of Georgians in the future, any economic development is not sustainable if it's dependent on Russia, because Russia does not value not just economic development, they just don't value lives. To consider some type of cooperation with Russia, some type of being nice to Russia as a means of future development, that's absurd. That's why, yes, some economic costs will be borne by Georgia, but that is the price that we have to pay for freedom and for future economic development. So when we say that it could potentially be pragmatic to be nice to Russia, to say that, okay, we will not create any additional sanctions, that's not pragmatic, in my opinion. That's just a stupid and very short-term-oriented mindset. I think we as a country should be clear that, yes, in next month, next year, next ten years, we could bear some costs for being very clear on where we stand. But that's the cost that we are paying for development for future generations of Georgia and for longer-term prosperity.
Elene Kvanchilashvili: Speaking of pragmatism, we see how Russia is playing this game, right? It said that Georgia has the chance for direct flights with Russia that Georgian milk and cheese can enter the Russian market. What should be the stance of the private sector on this? What is your take? Should it see Russia's market as an opportunity in this situation?
Giorgi Papava: We see today, that even though there is no ongoing war between Russia and Georgia and even though the war is geographically taking place in Ukraine, still any business who was reliant on some type of activity, economic transactions with Russia is hurt right now. This is the case when we are not even directly involved in the war. We are in war with Russia for many years, but we are not having armed conflict going on in this very second. Still, the dependence of Georgian businesses on Russia has been devastating for them. That's probably the best way for them to learn lessons and plan for their future. Other than that, like just to consider a more long-term perspective... We have a history of last ten years, 20 years. We can see that any profits and any revenues, any positive results that we can get from the Russian market is very short-lived and at the end of the day results in deterioration of businesses, economic standing, and financial standing. And therefore, I think this is one more lesson for the Georgian private sector to diminish its ties with the Russian market and get oriented towards other partners, which, thank God, are quite abundant. The private sector itself needs to take some more initiative in this regard because we have Europeans, Americans who are trying to push our private sector, our businesses towards the West, and sometimes we ourselves commit to short-term benefits rather than long-term development. That has been hurting us for years now.
Elene Kvanchilashvili: What are some of the main challenges that Georgia faces right now? And do you see any plan to withstand these challenges?
Giorgi Papava: Unfortunately for us, the main challenge is the outcome of the war and how it will affect us. Unfortunately, we have no way to impact the outcome of the Russian war in Ukraine. What we can do in this process is make sure that we are so clearly standing next to Ukraine and next to the West that when the war ends, no matter how it ends, there is no doubt that we have done whatever we could have done in this process. So when it comes to future development, when it comes to not supporting Ukraine in the armed conflict, but in supporting Ukraine's rebuilding its country economically and otherwise, in that process, we will be part of that. In the long term, that's critical. I think we should think forward in five, ten years when we will be analyzing how this conflict has evolved. What our positions were during this conflict will determine our future. Elene Kvanchilashvili:
Giorgi Papava Russia European Union Georgia Georgian Business georgian economy Ukraine